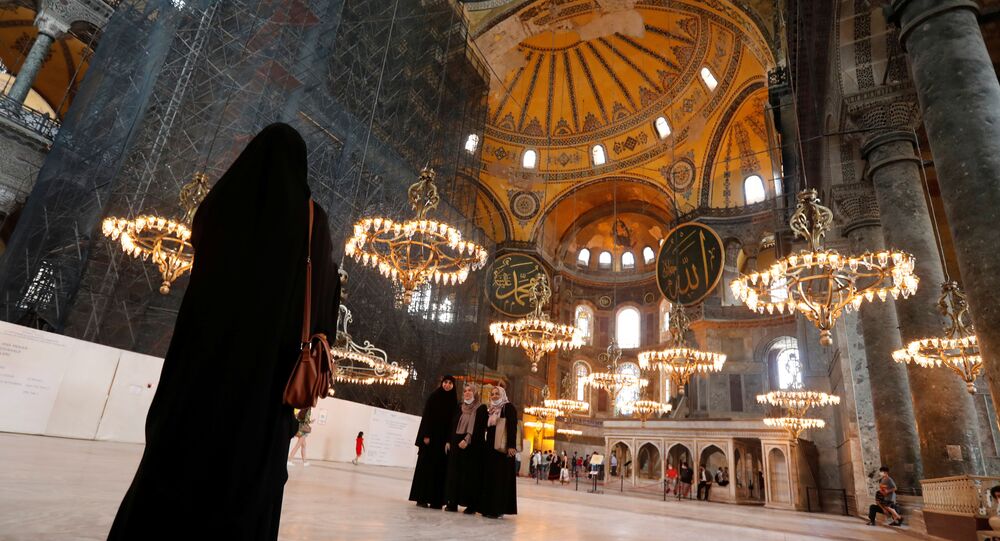 New Delhi (Sputnik): The controversy around the centuries-old Hindu-Muslim row over the actual ownership of a piece of land doesn’t seem to be dying, despite India's Supreme Court settling the dispute in 2019. A grand Ram Temple will be built on land where the 16th century Babri Mosque once stood, following the court’s verdict last year.

As all eyes are set on the foundation-laying of the Ram Temple in India's Ayodhya city by Prime Minister Narendra Modi on Wednesday, the All India Muslim Personal Law Board has stated that the conversion of Hagia Sophia from a museum into a mosque is a “great example” for them and that the Babri Mosque will always be there.

In a Tweet, the prime litigant in the Ram Temple-Babri Mosque suit lashed out, calling it an "illegal and shameful encroachment" and threatened that the situation won’t last forever.

“Babri masjid (mosque) was and will always be a Masjid. Hagia Sophia is a great example for us. Usurpation of the land by an unjust, oppressive, shameful and majority appeasing judgment can't change its status. No need to be heartbroken. Situations don't last forever”, said the All India Muslim Personal Law Board.

#BabriMasjid was and will always be a Masjid. #HagiaSophia is a great example for us. Usurpation of the land by an unjust, oppressive, shameful and majority appeasing judgment can't change it's status. No need to be heartbroken. Situations don't last forever.#ItsPolitics pic.twitter.com/nTOig7Mjx6

​The Hagia Sophia was converted into a mosque when Turkish President Recep Tayyip Erdogan revoked its museum status. The decision led to criticism from Christian communities and triggered protests outside the religious site.

Asaduddin Owaisi, president of a political party from the southern state of Telangana, also reiterated that the Babri Mosque existed and will remain. He shared an archive image of the mosque and its controversial demolition by Hindu zealots in 1992.

​​Narendra Modi laid the first silver brick on Wednesday during the ground-breaking ceremony in Ayodhya. The dispute over the ownership of the land has been the longest Hindu-Muslim litigation in the country's history, as Hindus claimed Mughal ruler Babur demolished the Ram Temple and constructed a mosque there, while Muslims rejected this. Muslims demanded for a mosque to be rebuilt on the site after the 16th century Babri Mosque was razed in 1992.