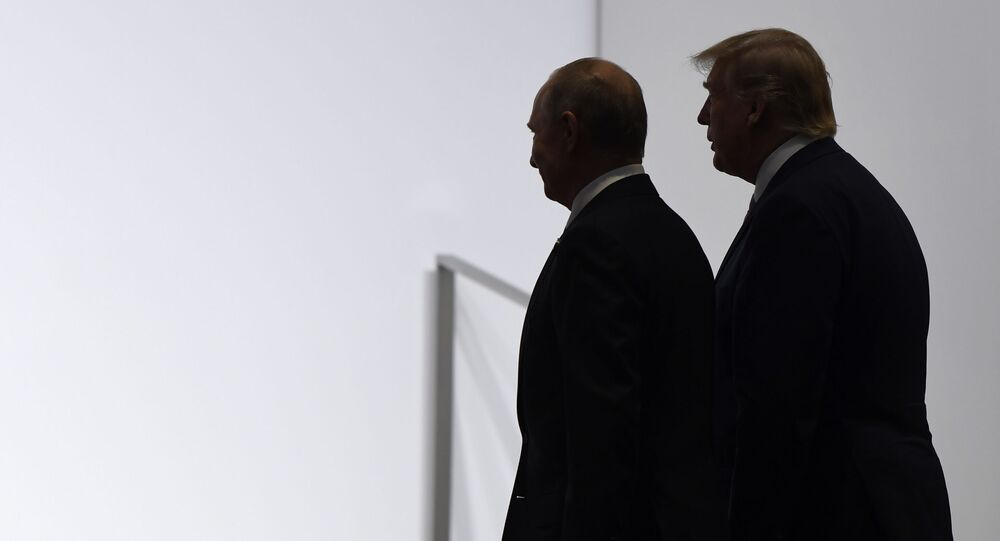 Trump is Being 'Soft' on Russia? Don’t Be Ridiculous! Why MSM Should Fact-Check Properly

Numerous waves of sanctions, withdrawals from key security treaties and confrontation in the Middle East – yet, some American outlets keep defining President Trump as a Russian “puppet” who was placed in the White House by the Kremlin’s omnipotent hand.

Donald Trump on the other hand, repeatedly maintains that he is really “tough” on Moscow - perhaps more so than any other president in American history.

But the anti-Trump media just don’t buy this argument.

CNN's Brianna Keilar went on a rant recently, during which she mentioned a number of issues and instances which allegedly demonstrate the 45th US president’s soft stance towards the Kremlin, all accompanied by a graphic message: "Trump says he's been tough on Russia. Nah.”

When Trump leaves the stage whenever that may be, it will be interesting to see if CNN will attempt to pivot back to being the serious news org it was in the days of Bernard Shaw & Aaron Brown.

And the chyron, from a policy perspective, is very debatable & therefore an opinion. https://t.co/76tqsx1h84

​The lack of a response from Trump over the seemingly baseless allegations that Russia offered money to the Taliban to kill American soldiers in Afghanistan (something denied by both Moscow and the Taliban) has also become a recent point of attack against the American president.

A Washington Post columnist even dubbed the president “Putin’s puppet”, in relation to an interview on the bounties report, while Foreign Policy magazine went as far as to claim that Trump had been “scoffing at Russian bounties on the heads of American soldiers in Afghanistan”, underscoring “his continued stance of putting Russia above U.S. interests and American lives”.

With a fast-approaching presidential election, the search for Russian connections that can be somehow linked to Donald Trump’s allegedly flattering rhetoric towards Russia and Vladimir Putin is gaining momentum among the president's enemies.

But the truth is very different. Many might find it surprising but the reality is that Trump has not been as soft with Moscow as many American mainstream news sources would suggest. In fact, relations between Moscow and Washington has significantly cooled during Trump’s presidency in a number of key strategic, economic and political areas. Indeed the Kremlin says that Russia-US relations are now at their “lowest” point in history.

Since taking office in January 2016, Trump has authorized a string of sanctions against Russian officials and business entities. These measures includes the Countering America’s Adversaries Through Sanctions Act (CAATSA) signed into law by Trump in August 2017, dubbed by Russia's then-PM Dmitri Medvedev as a “full-scale trade war”.

Subsequently, sanctions targeting Russian businesses and public figures were imposed by the US Treasury in spring 2018, citing Moscow’s “malign” activities around the world, including alleged cyber-crimes, meddling in the US 2016 elections and Russian activities in Syria and Ukraine. The US Treasury also targeted the Kremlin’s alleged meddling in the US midterm elections, accusing it of “subverting” American democratic processes.

In March 2018, Trump expelled 60 Russian diplomats from Washington after the poisoning of ex-GRU agent Sergei Skripal in the United Kingdom, an act which was immediately blamed on Russian agents. A first round of sanctions in relation to this highly controversial case was slapped on Moscow later in the year, with a second wave occurring in August 2019. Trump also did nothing to lift the sanctions already  imposed on Russia following the Crimea referendum in 2014.

Moscow was - needless to say - not happy with any of these moves, and categorically denied all of the accusations brought against it by Western powers. But the sanctions really did have an impact and certainly put an end to any warm feeling that may have existed between Putin and Trump, despite the supposed "puppet" narrative continuing to be perpetuated by the mainstream media.

Vital Agreements Brought to an End, Future of START Unclear

Arms control has been another area of tension. Under the Trump the administration, the United States announced its withdrawal from the 1987 Intermediate-Range Nuclear Forces (INF) treaty, that was set to fully eliminate ballistic missiles, cruise missiles and their launchers. Washington “solely” blamed Russia for its move, citing allegations that it was “covertly developing and fielding a prohibited missile system that poses a direct threat to our allies and troops abroad”, something Moscow has wholeheartedly denied.

Worrying to many, little progress has been made to prolong another important treaty in relations to arms control between the two states: the New START. The nuclear arms reduction agreement was signed between President Barack Obama and President Medvedev back in 2010. START is set to expire in 2021, but its future remains uncertain, as Washington keeps insisting that China should join the talks on the treaty’s extension, which it is so far unwilling to do, citing the fact that its nuclear arsenal was significantly lower than that of the United States.

In addition, President Trump announced that the US would be withdrawing from another key strategic partnership – the Treaty on Open Skies. The agreement was signed in 1992 to permit its 35 member states gathering information about each other’s military activities through short-notice reconnaissance flights. But according to Trump, Russia was violating the treaty and thus, the US’s withdrawal was imminent.

Trump has never been a NATO enthusiast, recently proceeding with plans to pull out 12,000 personnel from Germany, which he has accused of being “delinquent” in its commitment to spend 2 percent of its GDP on defence. But the president has also dragged Moscow into this dispute, asking why the United States should protect Germany from Russia, when Berlin actually pays it “billions of dollars a year for Energy”.

This claim reinforced a long-maintained belief that the alliance existed solely as a deterrence against an alleged “Russian threat”. But it also illustrated another important point of disagreement between Moscow and Washington – the Nord Stream 2 pipeline. The project has been criticised by President Trump as creating a security risk for Europe by turning Germany into "hostage of Russia". There are some economic issues at stake though, as the United States is not interested in losing the lucrative European gas market to Russia. In December 2019, Trump signed a law prompting to punish with sanctions any company that assists Russia’s largest gas exporter Gazprom with the project.

Opposition in the Middle East

The US and Russia have been on opposite sides of the barricades in the ongoing Syrian civil war. Russia publicly backed the country’s legitimate president Bashar al-Assad, a man Trump has called a “gas killing animal”.

In 2017, the US military targeted Syria’s Shayrat air base with 59 Tomahawk missiles over an alleged chemical attack in Khan Shaykhun on 4 April. This received Russia’s strong condemnation, with Moscow pledging to suspend an existing agreement set to minimize the risk of in-flight incidents between US and Russian aircraft operating in Syria.

A year later, Washington publicly deliberated new military actions against Bashar al-Assad's government, accusing it of perpetuating a new chemical weapons attack against the Syrian population in April 2018, which was denied by both Moscow and Damascus.

This prompted Russia to promise an imminent response to any American strike towards Syria. Then, the US president went on to openly threaten Russia over its call for a possible retaliation by saying “Get ready Russia, because they will be coming, nice and new and “smart!”.

Eventually, the US, France and Britain launched over 100 missiles against Syria, while trying to avoid a direct confrontation with Russia. Moscow dubbed the use of force against Syria an “act of aggression.”

Trump administration also slapped Moscow with sanctions over its support for the Syrian president.

During this heated dispute between the two nuclear powers, Donald Trump admitted that the US relationship with Russia was “worse now than it has ever been, and that includes the Cold War”.