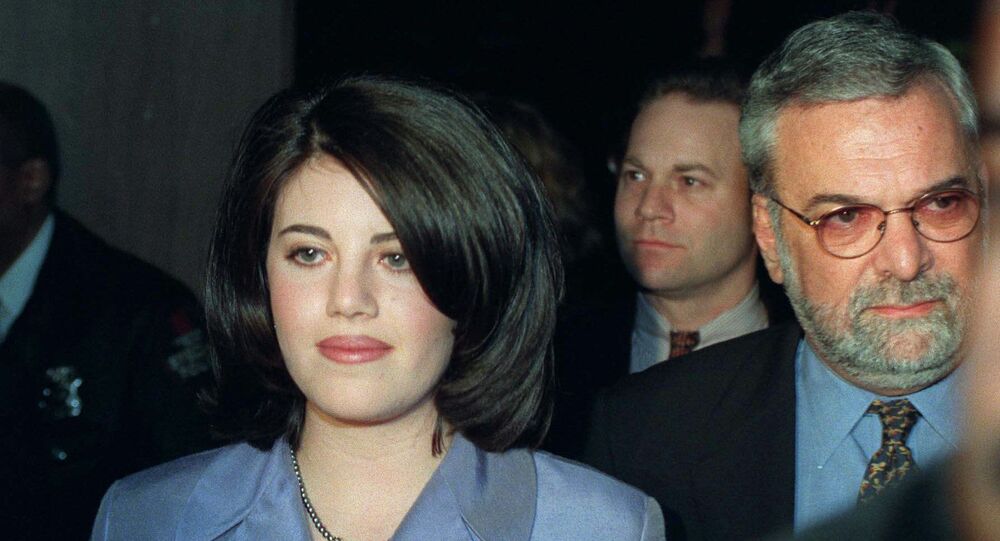 The 1998 sex scandal nearly ended Bill Clinton’s presidency and defined the life of Monica Lewinsky, who faced so much hatred on- and offline that she made it her mission to fight bullying.

Vladimir ‘Vovan’ Kuznetsov and Alexei ‘Lexus’ Stolyarov, a duo of Russian pranksters, spke to the White House’s most infamous intern of all time, Monica Lewinsky.

Vovan and Lexus called Lewinsky posing as Greta Thunberg and her dad Swante.

The fake Greta praised Lewinsky for her anti-bullying efforts and complained about receiving a lot of vitriol online.

Lewinsky, who was bullied extensively after her sex scandal with President Bill Clinton, recommended that 'Greta' mute certain keywords to keep offensive or mean tweets off her timeline.

The fake Swante then brought up Ukraine’s President Volodymyr Zelensky, who had been dubbed “Monica Zelensky” at home over his phone call with Donald Trump that led to Trump’s impeachment.

Lewinsky agreed that this is an example of bullying in politics, saying: “I certainly get triggered by these kinds of things that happen, but I’ve just kind of gotten used to it – which is unfortunate.”

“I tweet about politics and I retweet a lot of political statements, [but] I don’t do very many interviews and I really try to stay away from politics, in a sense.”

The fake Greta told Lewinsky about a fictitious meeting with Donald Trump on the sidelines of the UN climate summit in New York in September 2019.

“Trump came up to me and said – he was whispering – ‘Get out of here if you don’t want to end up like Monica Lewinsky, you little stupid girl',” the Greta impersonator said, prompting a gasp from Lewinsky.

The woman said it was “terrifying” and offered support to Greta. “It must have been scary, I imagine. Or maybe not. Maybe it wasn’t scary, but I would have been scared,” she added with a laugh.

The person purporting to be Swante Thunberg chimes in to ask whether Greta should testify in Congress about the encounter, an idea Lewinsky politely shot down and suggested she think about “some other options” to make a revelation “powerful and useful”.

‘Swante’ then repeats the theory that President Clinton started a bombing campaign in Yugoslavia to distract public attention from his sex scandal.

“It’s a much, much bigger story,” Lewinsky replied, turning the conversation again to the subject of bullying.

The pranksters told Russian media that they released the conversation as a sort of a birthday present for Lewinsky, who turned 47 on Thursday.

“It became clear that she has fully dedicated herself to public work, fighting bullying,” Vovan said.

The Russian duo are the hosts of ‘Stars Save the Earth’, a series of phone calls with politicians and celebrities. They have previously called Polish President Andrzej Duda posing as the UN secretary-general and pulled the Greta prank on Joaquin Phoenix, Billie Eilish, Bernie Sanders, Maxine Waters, and more.