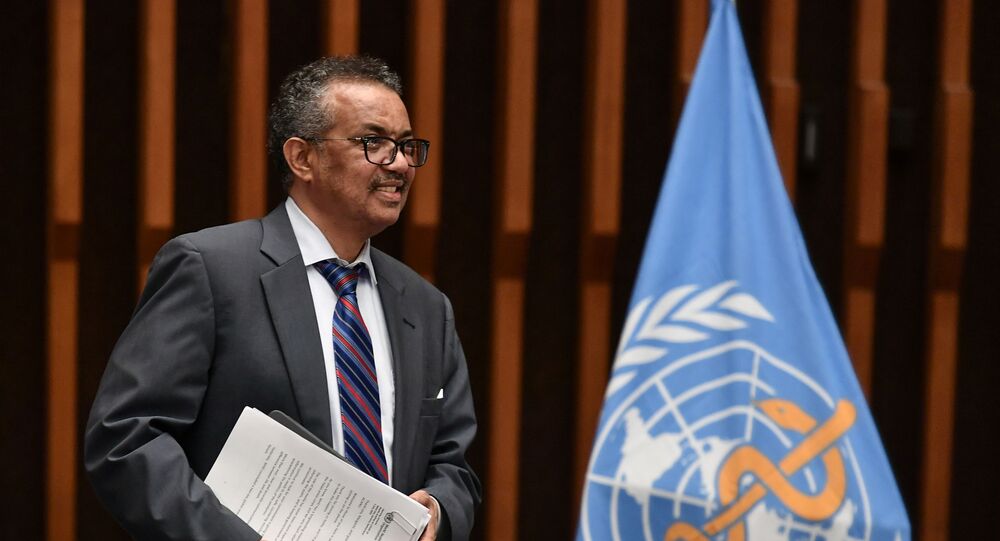 WHO Chief Blasts Pompeo Over Claim That He Was 'Bought by Chinese Gov't', Calls Allegation 'Untrue'

On Tuesday, the US Secretary of State reportedly told UK lawmakers that Chinese authorities had "bought" World Health Organization director-general Tedros Adhanom Ghebreyesus, and claimed that Beijing worked behind the scenes to ensure his appointment to the job in 2017.

WHO Chief Tedros Adhanom Ghebreyesus has dismissed allegations reportedly made by US Secretary of State Mike Pompeo during a visit to London this week about his alleged allegiance to China, saying the claims were absolutely unfounded.

"The comments are untrue and unacceptable and without any foundation for that matter," he said, speaking at a virtual briefing on Thursday.

Tedros urged Pompeo against the politicization of the coronavirus pandemic, and said he and his agency would focus on "saving lives" instead of being distracted by the secretary's claims.

"WHO will not be distracted by these comments. We don't want the international community also to be distracted. One of the greatest threats we face continues to be the politicization of the pandemic. COVID-19 does not respect borders, ideologies or political parties," the director-general stressed.

Earlier this week, British and US media reported that Pompeo had told a small group of UK lawmakers Tuesday that Beijing had effectively "bought" Tedros, and that there was 'firm intelligence' to suggest that the Chinese government made a deal to get him the job of WHO chief.

Conservative MP Iain Duncan Smith, who was reportedly present at the meeting with Pompeo, confirmed to Bloomberg that the secretary of state alleged that China had manipulated the May 2017 vote to ensure that Tedros was elected. "He openly made the point that the arrival of the present chief had taken the WHO backwards and that it had become quite political," the lawmaker said.

A spokesperson from Prime Minister Boris Johnson's office told reporters that Pompeo had not made any similar allegations about Tedros during their meeting, and indicated that the Johnson "believes the WHO and its Director General are playing an important role in leading the global health response to the pandemic."

© AFP 2021 / FABRICE COFFRINI
Pompeo Says Confident WHO’s China Probe on Coronavirus Origins Will Be ‘Whitewashed’
Senior administration officials including President Trump himself have repeatedly accused the World Health Organization of toeing a pro-China line, and Washington formally began the process of withdrawing from the global health agency earlier this month. The move came several months after Washington pledged to halt US funding for the agency and to review its alleged 'severe mismanagement' "and covering up the spread of the coronavirus."

Earlier this month, a group of House Republicans wrote a letter to Tedros asking him to testify before Congress about the WHO's coronavirus response, and accused him of 'endorsing' "Chinese Communist Party propaganda efforts to cover up the origins of this virus and mislead the world."

Prior to its decision to halt funding to the agency, the US had been the WHO's top donor, with other major sponsors including  the United Nations, the UK, and the Bill and Melinda Gates Foundation.