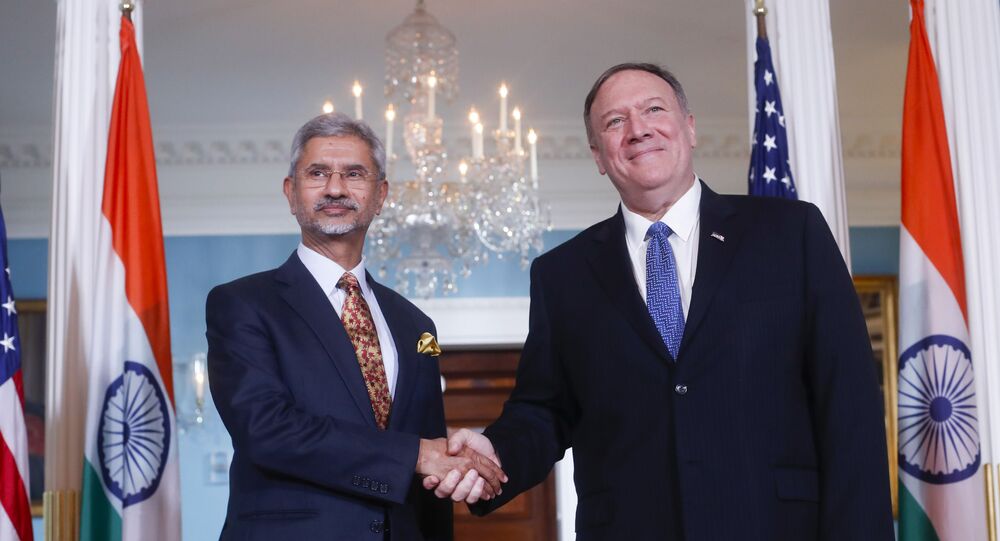 New Delhi (Sputnik): Earlier this week, Indian foreign minister S Jaishankar said that the US and China will be more influential than other players, but the world will be increasingly multipolar with strong bipolar characteristics. His comments come amid rising US pressure on its allies to act against China’s economic clout.

Advising the US to go “beyond the alliances” of the last two generations, Indian foreign minister S Jaishankar said on Wednesday that the US has to learn to “work in a more multipolar world, with more plurilateral relationship”.

The Indian minister, speaking at the India Ideas Summit organised by US-India Business Council, emphasised that the countries have to set aside minor differences to achieve bigger goals.

“Last few years have been dominated by your complaints and our complaint, while we work through trade issues, we have a convergence on the big picture," the minister said.

While thanking Jaishankar for giving “sage advice”, US Secretary of State Mike Pompeo warned India about Chinese technologies and said they represent security risks to Indians.

“The latest aggression by the People’s Liberation Army shows unacceptable behaviour and is condemned. I deeply regret the death of 20 Indian soldiers. I also support India's decision to ban 59 Chinese apps including tiktok,” Mike Pompeo said.

Pompeo added that India, the US, Australia and Japan had revived the "quad" amid growing threats posed by China in the Indian Ocean Region.

India needs to encourage an environment that is more open to increase trade and investment. I know that's possible because India-Us share spirit of hard work and entrepreneurship and Im confident that our partnership is only getting stronger, says Mike Pompeo.

​Earlier on Tuesday, India’s Minister of Commerce Piyush Goyal claimed that several niggling issues related to trade were almost resolved and the two countries may sign a preferential trade agreement ahead of a larger trade deal with the US. The H1B visa, higher tariffs on American goods, and the trade in farm products are just some of the issues that have created hiccups in bilateral relations over the last two years.

In comparison to the Cold War-era when there was near absolute bipolarity, Jaishankar believes that “we are moving towards a multipolar world where all the poles won’t be of the same size”.

The Indian minister’s statement comes in the time when US has been pressurising its allies to join it in an alliance against China while seeking support to isolate Iran and Russia on several issues.

Earlier this month, the US State Department reiterated that India must “forgo transactions with Russia that risk triggering sanctions under the Countering America’s Adversaries Through Sanctions Act”. However, India has conveyed to the Trump administration that it takes defence decisions solely in the national interest.