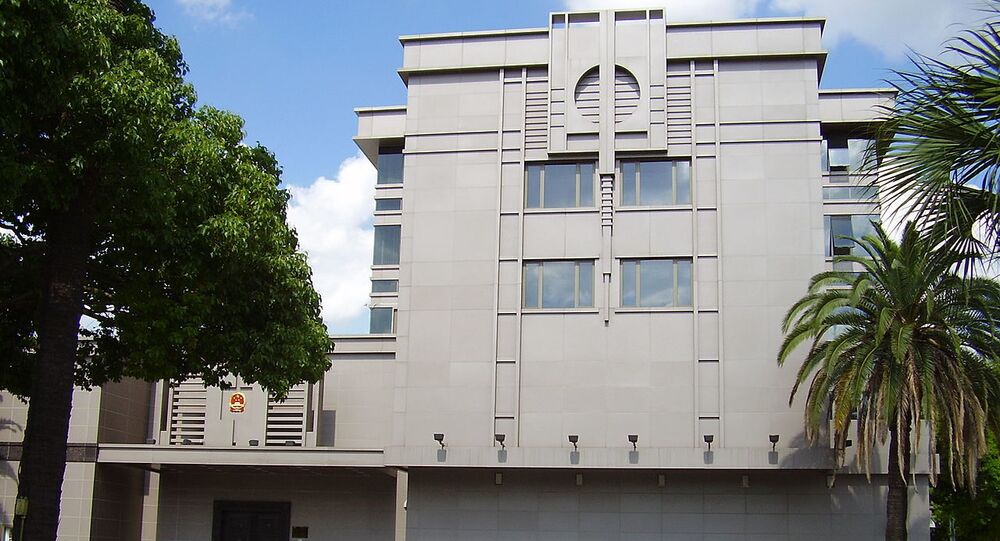 US Orders China to Shut Down its Houston, Texas Consulate in 72 Hours

The Global Times' editor-in-chief had claimed earlier that Washington asked Beijing to close down one of its five consulates in the country, specifically, the one located in Houston, Texas. The Chinese Foreign Ministry later confirmed this report.

The United States has asked China to close its Passport and Visa Office at the China Consulate General in Houston, Texas, according to the Global Times editor-in-chief, as cited by Reuters.

The Chinese Foreign Ministry confirmed the development, saying that Washington had "abruptly" informed Beijing to close down its Texas consulate on 21 July.

According to daily briefing of Chinese foreign ministry spokesman Wang Wenbin, Beijing has strongly condemned the decision and called upon the US to rescind the move, while suggesting retaliatory measures in response, as quoted by Reuters.

During the briefing, Wang Wenbin also described the US decision as a "political provocation" and "a grave violation of international law".

"China firmly condemns this revolting and unjustified move, undermining Chinese-US relations ... China calls on the US to immediately abolish this erroneous decision," the official added.

Beijing currently operates five Consulates-General in the United States, including those in New York, Chicago, San Francisco and Los Angeles, as well as the Chinese Embassy in Washington, DC.

The local NBC TV affiliate KPRC 2 quoted the Houston Police Department, as saying that police and fire officials had responded to reports earlier about a fire being sighted in the courtyard of the consulate on Tuesday night.

© REUTERS / RONALD CLINE
Fire trucks are seen outside the Chinese consulate, where local media reported trash cans filled with documents are being burned in the courtyard, in Houston, Texas, U.S. July 21, 2020, in this still image taken from video obtained from social media

Reports suggested that the fire was the result of documents being burned in the building's courtyard.

This video shared with us by a viewer who lives next to the Consulate General of China in #Houston shows fire and activity in the courtyard of the building.
DETAILS SO FAR: https://t.co/2cOeKoap96 pic.twitter.com/0myxe6HIlC

Commenting on reports about documents being burned in the consulate's courtyard, Wang Wenbin said that the Houston office was operating "normally".

The development signified a "decouple" and "chicken game" in China-US relations, says Dr. Wang Yiwei, Director of the Institute of International Affairs and Centre for European Studies at Renmin University of Beijing.

"Trump is only pressuring China to win the re-election, to get away from his troubles. Even he can not reach such goal. More dangerous actions such as cutting diplomatic relations and military conflict may happen as well, if China shows weakness. Trump is forcing China to make sacrifices for his re-election, by hijacking American voters and American allies," the professor adds.

US Explains Its Move

Later, US State Department Spokesperson Morgan Ortagus commented on the move, while saying, as quoted by Reuters, that the closure of the consulate was motivated by the need to "protect American intellectual property" and "private information".

On Tuesday, the US Justice Department said that two Chinese officials were indicated as trying to "steal" research on COVID-19 vaccine through alleged hacking attempts on a number of US, British and other international companies. China's UK ambassador, Liu Xiaoming, dismissed these "groundless" claims as "disrespect for Chinese scientists & their achievements".

Beijing has been one among leading countries in its anti-coronavirus research attempts, with its second national experiment vaccine, produced by Sinovac Biotech, is soon expected to enter final stage of human testing.

The Latest Turn in Deteriorating Relations?

The China-US relationship has plummeted during the coronavirus pandemic, as US President Donald Trump repeatedly blamed the spreading of the virus on Beijing. US officials had said earlier that they were mulling over various options to "punish" China for the number of deaths which have resulted from the pandemic, including banning some of its most popular social media platforms, such as TikTok. However, according to China's foreign ministry, the order to shut down its consulate was rather unexpected.

Washington has also been pressuring its Five Eyes intelligence alliance partners (the UK, Canada, Australia and New Zealand) to abstain from allowing Chinese giant Huawei to enter their national 5G networks, citing long-disputed claims about the company's espionage activities on behalf of Beijing.

Recently, the UK made a U-turn by announcing that it would ban Huawei, a world leader in producing 5G equipment, from its market, despite its January decision to partner with the company in its national fifth-generation-technology rollout. Donald Trump said at that time that it was the United States who "convinced" its partners about alleged security risks associated with the firm, a statement that was criticised by British officials as "claiming credit" for the decision, that was primarily based on a "technical assessment". Some, however, later suggested that it was still the need to conclude a trade deal with the United States that influenced the British decision to remove Huawei equipment from the country's 5G networks by 2027.