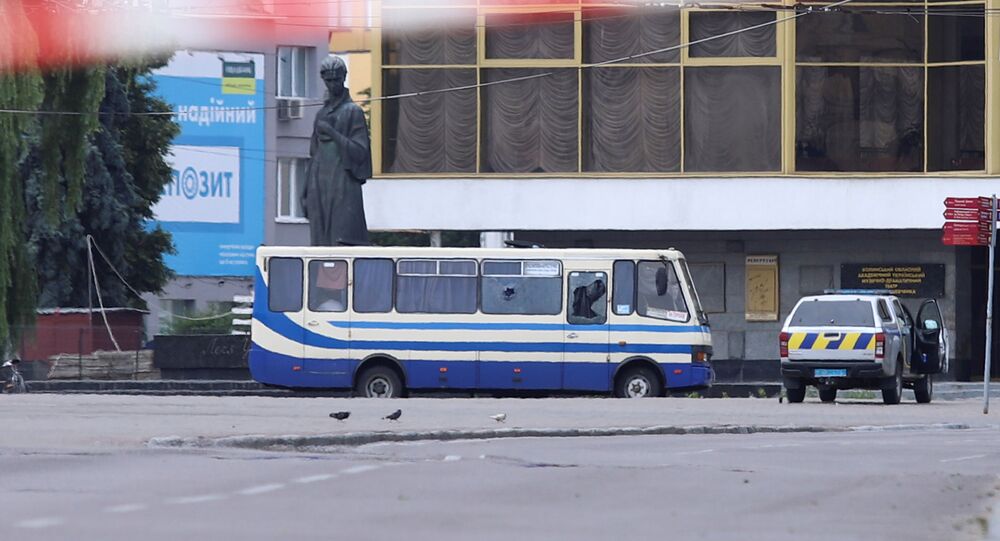 A 44-year-old man Maksim Krivosh hijacked a bus with 20 passengers in the centre of Lutsk on Tuesday morning. After about 12 hours of the hostage crisis, the hijacker eventually released all hostages and was detained by the police.

Blasts were heard at the site of the hostage-taking incident in the Ukrainian city of Lutsk, a correspondent for Ukraine's Channel 24 reported.

Prior to this, Ukrainian Deputy Interior Minister Anton Gerashchenko said in a statement that a man had seized a bus with around 20 hostages, threatening to detonate a bomb on the vehicle and also an explosive at another location. The bus, which has shattered windows, was parked at Teatralnaya Square in downtown Lutsk.

Local police immediately launched a rescue operation and started working to identify the attacker, who introduced himself to law enforcement as Maksim Plokhoy. The armed man told local outlet First Social News Channel via the phone that there were children and pregnant women among the hostages.

The police also launched a criminal case under the "hostage-taking" article of Ukraine's Criminal Code, which provides for a prison term of between 7 and 15 years. However, several hours later, Security Service of Ukraine Chairman Ivan Bakanov said that Ukrainian police are considering the hostage-taking situation in Lutsk a terrorist act.