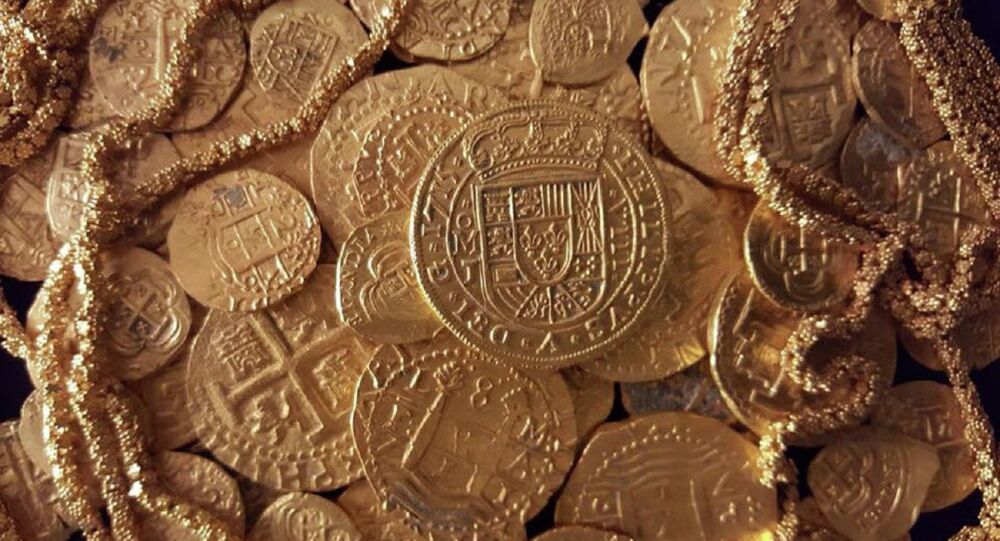 In June 1708, during the raging War of the Spanish Succession, Spanish galleon San José went down to the bottom of the Atlantic Ocean after its gunpowder exploded, burying a mind-boggling treasure of gold, silver and jewels from Peruvian mines worth up to $20bln.

Dubbed "the holy grail of shipwrecks", the 310-year-old Spanish galleon lying at the bottom of the Caribbean Sea and thought to be hiding a treasure estimated to be worth between $10bln and $20bln today has been found thanks to an underwater robotic submarine, reports the Express.

The wreckage of the three-masted Spanish galleon San José, which sank in 1708 carrying a cargo of ceramics, gold, silver, and emeralds, has been discovered in 2,000 feet of water off the coast of Colombia. https://t.co/ywrIziLrju pic.twitter.com/BeSKct7oSN

​Remus 6000, which can dive nearly four miles and is loaded with sensors and cameras, is operated by the Woods Hole Oceanographic Institute in Massachusetts.

#USNSBowditch crew member controls the LARS to bring REMUS 6000 back onboard. pic.twitter.com/XnvBhwQXxc

​It “officially discovered” the ship off the coast of Cartagena, Colombia, on 27 November 2015, almost 2,000 feet below the surface, by scanning the sea floor using long-range sonar.

On assignment in Woods Hole, MA with @DonDahlerCBS reporting on the REMUS 6000, the submarine that found the location of Spanish Galleon San Jose which sank over 300 years ago. The shipwreck’s treasure is worth as much as $17 BILLION. pic.twitter.com/CrFhXEGiQq

​It then doubled back to take pictures of objects that seemed out of the ordinary.

It was the bronze cannons engraved with dolphins that confirmed the remarkable find, according to Jeff Kaeli, a research engineer with the Woods Hole Oceanographic Institution, who was quoted by CBS in 2018 as saying:

"I just sat there for about 10 minutes and smiled… I'm not a marine archaeologist, but...I know what a cannon looks like. So in that moment, I guess I was the only person in the world who knew we'd found the shipwreck," he said.

Working in collaboration with the Colombian government, the Woods Hole team discovered numerous artefacts, such as teacups and ceramic jugs.

"You can take bigger risks with your technology and go to places where it wouldn't be safe or feasible to put a human being,” Kaeli was quoted as saying.

The Mystery of the San Jose

The San Jose galleon left the Panama port city of Portobelo in May 1708 laden with gold, silver and precious stones extracted from what was then Spanish-controlled Peru and destined for King Philip V of Spain, to finance the War of the Spanish Succession.

Cartagena was meant to be a quick stop to repair the San Jose before its longer journey to Havana, Cuba, and then on to Spain. However, by 8 June, a battle for the San José’s treasure had begun with the British Navy, who were involved in the war.

Explosion of the Spanish Galleon San José during Wager's Action in 1708. Oil on canvas by Samuel Scott. pic.twitter.com/lNdo5aABZg

​According to a theory espoused by Gonzalo Zuñiga, a curator at the Naval Museum of the Caribbean in Cartagena, instead of surrendering the San Jose and returning to Spain empty-handed, its captain could have ignited the gunpowder on the ship and exploded the galleon intentionally.

The exact location of the wreckage has since been kept under wraps due to a custody dispute among parties staking claims to the San Jose’s riches. The sunken vessel is claimed to be located close to the Rosario Islands, a tropical archipelago and national park 40km from Cartagena.

Colombia and Spain both say it belongs to them.

In 2018, Juan Manuel Santos Calderon, former President of Colombia, wrote on Twitter that “The San José galleon, sunken in national waters, is one of the greatest finds of history. With the law of submerged cultural heritage, we can recover it.”

Spain argues that the San Jose “is a military vessel and therefore is still Spanish property under the terms of a United Nations treaty, of which Colombia is not a signatory,” Reuters reported.

In April 2019, the Superior Tribunal of Barranquilla issued an embargo on salvaging of the San Jose site while the claims to ownership are worked out in the court system.

"Everyone is focused on the treasure aspect, the whole thing is a cultural treasure,” said Jeff Kaeli of the Woods Hole Oceanographic Institution.