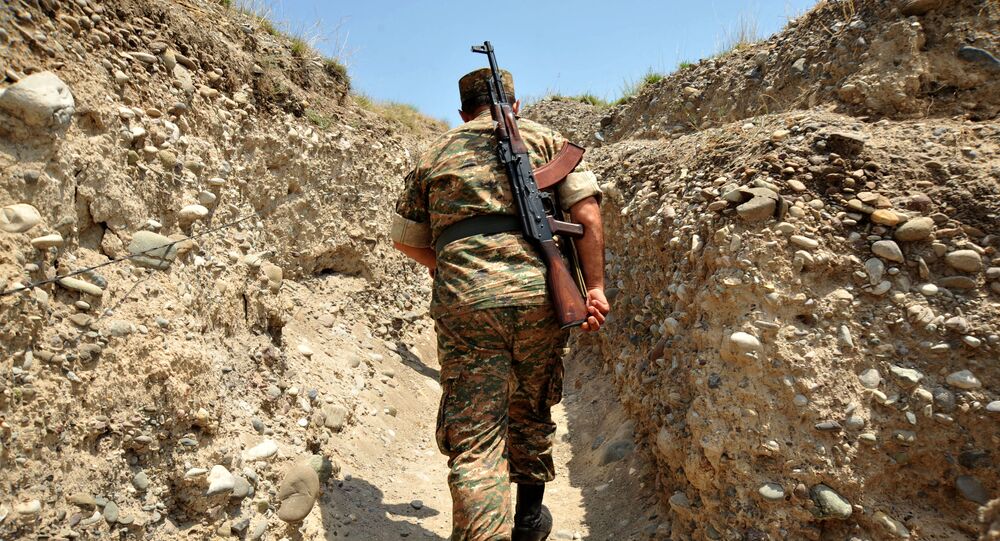 BAKU (Sputnik) - The Azerbaijani Defenсe Ministry reported on Tuesday, amid escalation with neighbouring Armenia, that Maj. Gen. Polad Gashimov and Col. Ilgar Mirzyaev were killed in firing by the Armenian armed forces in the Tovuz region at the border.

"On the night into July 14, violent clashes continued in the Tovuz region. We were engaged in devastating combat with the rival. Around 100 rival troops, a significant amount of military equipment and important objects were eliminated. The Azerbaijani army has also suffered damage. Maj. Gen. Polad Gashimov and Col. Ilgar Mirzyaev died heroically during clashes in the morning," Deputy Defenсe Minister Karim Valiev told reporters.

In a separate development, the Armenian Defence Ministry reported that two more Armenian servicemen were killed as a result of shelling by the Azerbaijani military amid border tensions on Tuesday, bringing the death toll to four.

"As a result of the shelling ... [by Azerbaijan] on the northeastern part of the Armenian-Azerbaijani state border, military servicemen, junior sergeants Smbat Gabrielyan and Grisha Matevosyan, sustained fatal wounds," the ministry said in a statement.

Earlier in the day, the ministry said that two military officers — Maj. Garush Ambartsumyan and Cap. Sos Elbakyan — were killed in the clashes.

Russia is Ready to Help

The Kremlin is deeply concerned over clashes at the Armenian-Azerbaijani border and calls on the parties to show restraint and cease fire, spokesman Dmitry Peskov said on Tuesday.

"We are deeply concerned over the skirmish at the Armenian-Azerbaijani border. We call on both sides to show restraint and fulfil ceasefire obligations," Peskov told reporters.

"As we have already said at different levels, Russia is ready to act as a mediator as a co-chair of the Minsk group. You know that Foreign Minister Sergey Lavrov has held intense phone talks with his counterparts from Baku and Yerevan," Peskov added.

The Collective Security Treaty Organization (CSTO) expresses serious concerns over the tensions at the border between Armenia and Azerbaijan and calls for an immediate ceasefire, according to the CSTO Secretariat's comment, provided to Sputnik by press secretary Vladimir Zaynetdinov.

The organization called for "immediate restoration of the ceasefire in the zone of CSTO responsibility", extended condolences to the families of the victims and wished quick recovery to the injured people.

"The unfolding situation does not promote normalization at the border between the two neighbouring countries, one of which, the Republic of Armenia, is a CSTO member state. It is a manifestation of a violation of the ceasefire agreements reached by the leaderships of Armenia and Azerbaijan," the statement read on.

Tensions between Armenia and Azerbaijan over the region of Nagorno-Karabakh and several other surrounding districts date back to 1988 when the overwhelmingly Armenian Nagorno-Karabakh autonomy announced that it was leaving the Soviet Azerbaijani Republic. It proclaimed independence in 1991. Azerbaijan retaliated by starting an offensive which resulted in the country losing control over the disputed territory.

The Organisation for Security and Cooperation in Europe's Minsk Group has been mediating peace in the disputed region since 1992. Despite the fact that a ceasefire agreement between the sides was reached in 1994, clashes and on the border occur from time to time.