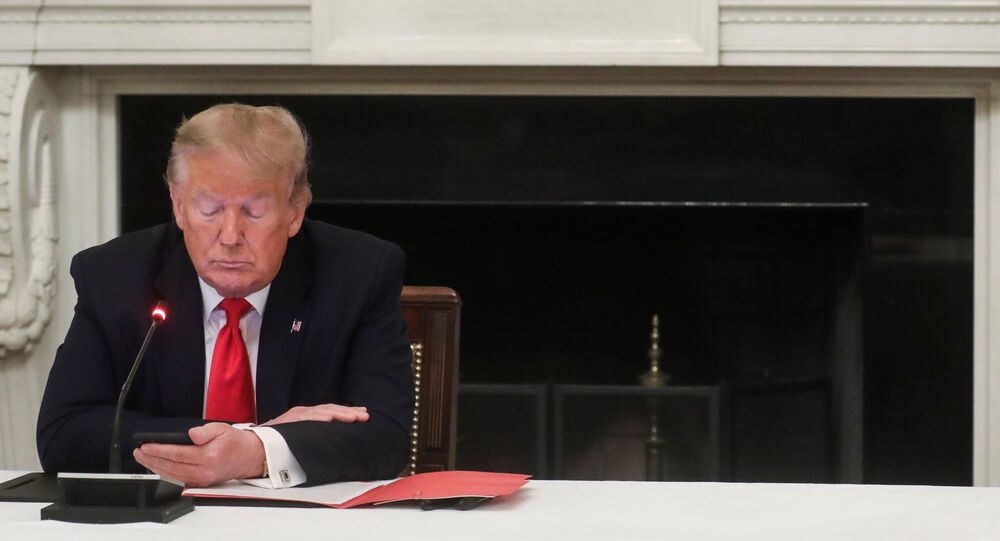 On Monday, Secretary of State Mike Pompeo indicated that Washington has already issued restrictions against Chinese tech giants including Huawei and ZTE, and would be making similar steps “with respect to Chinese apps on people’s cellphones.”

US President Donald Trump has confirmed that the US was considering banning TikTok, saying the measure could be one of the ways Washington can respond to China for the coronavirus outbreak.

“It’s a big business. Look, what happened with China with this virus, what they’ve done to this country and to the entire world is disgraceful,” Trump added, reiterating his months-old claims accusing China of ‘deceiving the world’ regarding the extent and seriousness of the coronavirus pandemic in its early months.

“We are looking at numerous different things. TikTok’s one of them, one of many,” the president clarified, referring to US options to ‘punish’ Beijing.

Trump also boasted that if he had listened to his experts, including Dr. Anthony Fauchi, and failed to slap travel restrictions on China early on during the pandemic, “we would have been in much worse shape.”

The president’s comments follow remarks by Secretary of State Mike Pompeo on Monday in which he similarly said that the US was considering banning TikTok, following the lead of Indian authorities, who have moved to do so amid the ongoing India-China border dispute.

However, Pompeo suggested that privacy, not coronavirus, was the justification for the possible ban. According to the senior diplomat, Americans should avoid downloading and using TikTok unless they want “your private information in the hands of the Chinese Communist Party.”

"Statements of some politicians in the United States are completely empty speculations. The Chinese government has always required from Chinese enterprises to develop foreign economic cooperation on the basis of laws and in accordance with existing rules," Zhao said at a press briefing.

"We urge individuals in the United States to abandon prejudice and avoid judging others by itself, stop using state mechanisms to exert pressure on Chinese enterprises, make more efforts to promote trade and economic cooperation between China and the United States," he added.

TikTok, the popular short video service created by Chinese developer ByteDance, topped 2 billion downloads earlier this year, and has been particularly popular with young people. An estimated 165+ million Americans have downloaded the app. Last month, media reported that TikTok users had attempted to sabotage Trump’s presidential campaign rally in Tulsa, Oklahoma by ordering tickets and then failing to attend to ensure a low turnout. The Trump campaign rejected claims to that effect, saying that “leftists and online trolls” had no idea how a rally works if they thought they had any impact on numbers.

Last week, TikTokers began a new campaign against Trump by leaving negative reviews and comments for businesses owned by the Trump family on Yelp and Google.

Commenting by Pompeo’s announcement that the US might ban the service, a TikTok spokesperson told Business Insider that the company is “led by an American CEO,” and has “no higher priority than promoting a safe and secure app experience for our users.” The spokesperson stressed that the company has “never provided user data to the Chinese government, nor would we do so if asked.”

The US-China tech-related spat has been exacerbated in recent months, with the Federal Communications Commission moving to designate Huawei and ZTE as threats to US national security last week. On Tuesday, FBI director Christopher Wray accused China of spying on millions of Americans and attempting to steal US technology and research through hacking, economic espionage and digital influence campaigns.

Chinese officials have criticized US officials over the technology-related restrictions, saying there is no proof to US allegations of technology theft or espionage, and accusing Washington of unfair business practices.

The tech dispute is part of the much broader conflict between the US and China on trade, as well as tensions over the South China Sea, Hong Kong, Taiwan, and the coronavirus. In recent months, President Trump has repeatedly warned that the US could cut off relations with Beijing entirely over the COVID-19 pandemic.

The two countries have repeatedly accused each of malfeasance regarding the virus’s origins in the early months of the pandemic, with China’s Foreign Ministry hinting that it could have been brought to Wuhan by the US military, while Trump has called it the “China virus” and the “plague from China” and accused Beijing of failing to inform the world about the seriousness of the danger. China has denied the claims, and pointed to the success of its emergency response compared to that of the US.

Pompeo Says US is Considering Ban of Chinese Social Media Apps, Including TikTok