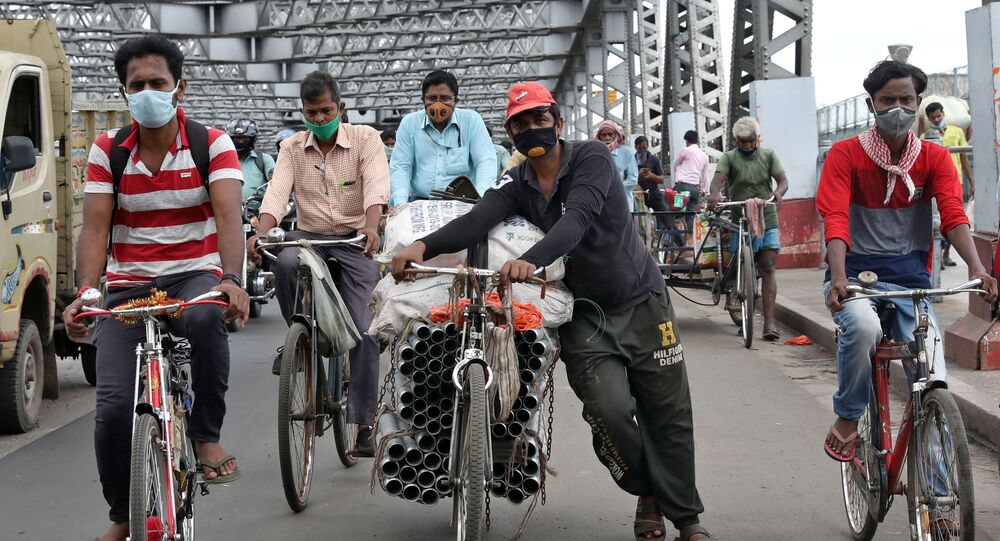 New Delhi (Sputnik): With 11.4 million COVID cases across the globe, drug manufacturers are racing against the clock to develop a vaccine and bring life and the economy back to their normal course. Among 140 companies, Bharat Biotech expressed confidence in being able to make their vaccine ready by the country's independence day on 15 Aug.

India's apex medical research body Indian Council of Medical Research (ICMR) announced the launch of the ‘first’ indigenous Covid-19 vaccine Covaxin for public use by 15 August 2020, triggering commotion among experts for setting an “unrealistic target” that is not in line with rigorous scientific standards.

“It is envisaged to launch the vaccine for public health use latest by August 15, 2020 after completion of all clinical trials… You are strictly advised to fast-track all approvals related to initiation of the clinical trial, and ensure that the subject enrolment is initiated no later than July 7, 2020,” ICMR stated on 3 July.

However, the scientific community finds the launch date of the vaccine unviable, saying even if the process is fast-tracked, it is "nearly impossible" to launch the vaccine by 15 August. ICMR is also aiming to complete two-stage trials in 38 days after the recruitment of participants for clinical trials.

Shahid Jameel, a virologist well-known for his research on the Hepatitis-E virus, agreed with the persistent view that giving out a set date for launch was "wrong and unprecedented". He told Sputnik that rather than focusing on a vaccine, a drug with 30-50% efficacy in treating coronavirus could reduce the overwhelming burden when looking at the current scenario.

“Developing a vaccine is fairly a long and rigorous process even if we fast-track it during these unprecedented times. Even if India develops a drug that is 50 percent or 30 percent efficacious, then it will help the country in reducing the burden to some extent,” Jameel told Sputnik.

He explains that Bharat Biotech India (BBIL) in collaboration with ICMR’s National Institute of Virology (NIV) is working to produce an “inactivated” vaccine which can sometimes make the disease worse. An inactive vaccine is one that is made by using particles of a Covid-19 virus that have been killed, making them unable to infect or replicate. However, parts of the virus can induce an immune reaction.

“It is seen in some case of respiratory virus, inactivated vaccines have actually made the disease worse. It is something to be worried about. You will not see that adequately in phase one and two, as they are short phases. In an inactivated vaccine, you are not giving it enough time to naturally expose or naturally infect. That is the downside,” he said.

Within a week after Indian Prime Minister Narendra Modi held a high-level meeting with officials to review preparations for a vaccine against COVID-19, ICMR alerted all 12 institutes engaged in human trials to meet the “timeline without lapse”, adding that “non-compliance will be viewed very seriously”.

The communiqué issued on 2 July added that it is the “top priority project” and is being monitored at the "highest level of government".

Jameel says it is for the regulator, Drugs Controller General of India (DCGI), to make a risk-benefit judgement – where it is accessed based on studies that the benefits of a vaccine are greater than the risks. But it is unusual that a developing partner tells the clinical trial site involved in scientific procedures that it “must complete” a project by a certain timeline.

“Launch of vaccine by 15 August is impossible and it was unprecedented. It shouldn’t have happened in the first place,” said Jameel.

Out of a total of 140 companies around the world, seven Indian companies are also working on vaccine development against COVID-19. The lead runners in the race are Oxford University-AstraZeneca and Moderna Inc, recognised as candidates by the WHO, who are expected to have one ready by the end of 2020.

Oxford University-AstraZeneca completed the phase one trial of the vaccine in April in over 1,000 healthy volunteers aged 18 to 55 years across several trial centres in southern England and is currently in phase III trials, which are the longest.

Explaining the process to develop a vaccine till getting the license, Jameel says initially the vaccine is developed in a lab or institute after research and development and multiple lots of vaccine are produced. Then the regulator is approached to seek approval for pre-clinical studies. They are typically done in animals to see if they produce required antibodies.

The pre-clinical data is submitted to the regulator to allow testing in humans, which is the phase I trial. They are safety trials where a vaccine is accessed for side effects and after a certain waiting period which is typically 2-3 weeks, the regulator is approached for permission for phase II trials. However, in fast-track cases permission to run both phase I and II can be given together.

In phase II a larger population is studied with different doses. This stage has been shortened in Covid-19 vaccine development. American Moderna took just 63 days to reach clinical trials.

On the basis of phase I and II studies, permission is given for phase III. This is a crucial stage where thousands of people are studied by dividing into two groups. Half the volunteers receive the vaccine while others receive a placebo.

It is an observational trial that requires more time to react on the volunteers through its normal course. If more people are infected in the placebo group, that means the vaccine is effective.

He says the downside of skipping the third phase of the long process means allowing usage by the public without knowing how effective the vaccine is.

“You have not given enough time for the vaccine to show reactogenicity (ability to produce common, adverse reactions) which cannot be adequately gauged in phase one and two because those are short phases. Potential side effects following infection and 100 percent efficacy is unknown.”

Following the backlash, ICMR in its last communiqué clarified that its attempt to speed up the development of the vaccine was to cut red tape, official routines and procedures that cause delays with their excessive complexity.

At the same time, it stated that endeavours by India’s medical professionals and research scientists “should not be second-guessed for their professionalism".

However, questions are being raised for the rush to release the vaccine on 15 August, celebrated as Independence Day in India, and if ICMR is under pressure to give out the news to share with the public on such a prominent day.

Bharat Biotech chairman Krishna Ella has refused to comment on ICMR’s timeline of clinical trials to media houses but said previously that if clinical trials of Covaxin were successful, the vaccine would be ready for mass use by early 2021.

Calling it beginning of the end, ICMR today announced that Covxin and another Indian manufacturer Zydus Cadila - working on the ZyCov-D Vaccine - will be testing 1,125 healthy volunteers in the two phases of trials.