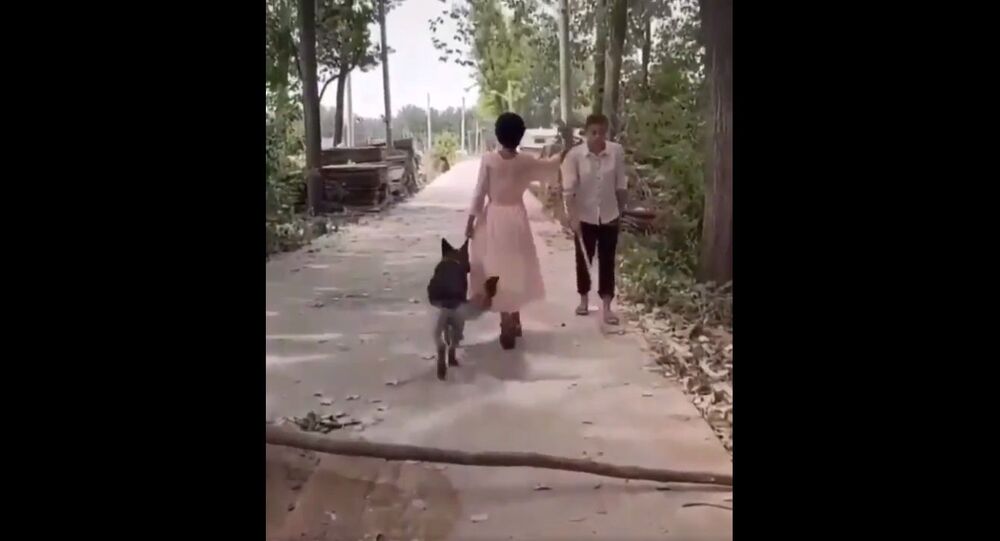 'What Good Could We Have Possibly Done to Deserve Dogs?’: Viral Video Wins Indians' Hearts

New Delhi (Sputnik): It's believed that at some point, the modern dog’s ancestor, the wolf, made a transition from the kingdom of the wild to become a domesticated companion. Dogs, time and again, have proven how much loyalty and love they have for their human friends.

An Indian doctor on Friday shared a heart-touching video of a dog excusing itself and suddenly going back to help a visually challenged man on the street.

Captioned “They are more ‘human’ than us”, the video began spreading rapidly like wildfire.

They are more 'Human' than us.. pic.twitter.com/PTgWK6I1P1

Netizens could not hold themselves from expressing their overwhelming love for “doggozens” – who they said bring joy and love with their expressive round eyes and wagging tails.

Hats off to the 🐕. The animal is better than the other "animal".

Let's not term such things as a 'Human' act make such acts only belong to the human species. We have always seen other species being more kind than humans.

It surprises me how much they know, and care. 😲

​The video has evoked hearty emotions from people because India has been witnessing a strange transportation of stray dogs from around the country to the north-eastern state of Nagaland.

Most people are familiar with the infamous “Yulin Dog Meat Festival” celebrated in China this time of the year. Just like the Yulin Festival, some tribes in Nagaland also consume dog meat as a delicacy. It is considered a relief for pain and ailments also.

If reports are to be believed, Indian stray dogs are being transported illegally via trucks to Nagaland for consumption.

Mind-numbing pictures of thousands of dogs, strangled inside sacks with their faces out, have surfaced on social media. People have urged others to write letters against the practice to Chief Secretary of Nagaland Temjen Toy.

Animal Bazar in Dimapur, Nagaland, India.
Need to send 50,000 emails in just 3 days to stop the dog market & fog meat restaurants.This practice must be stop. More info. in below picture.
Must send🙏

These dogs were being taken from West Bengal to Nagaland on the 26th of last month to be SOLD for MEAT. Please please write an EMAIL to csngl@nic.in, asking for this practise to be stopped. If they get 50,000+ emails tonight, they will act against this. Please do this tonight. 🙏 pic.twitter.com/wCrRApuMPx

Finally, on Wednesday, the state government of Nagaland decided to ban “Dog Bazaars”, Toy revealed in a Twitter post.

The State Government has decided to ban commercial import and trading of dogs and dog markets and also the sale of dog meat, both cooked and uncooked. Appreciate the wise decision taken by the State’s Cabinet @Manekagandhibjp @Neiphiu_Rio