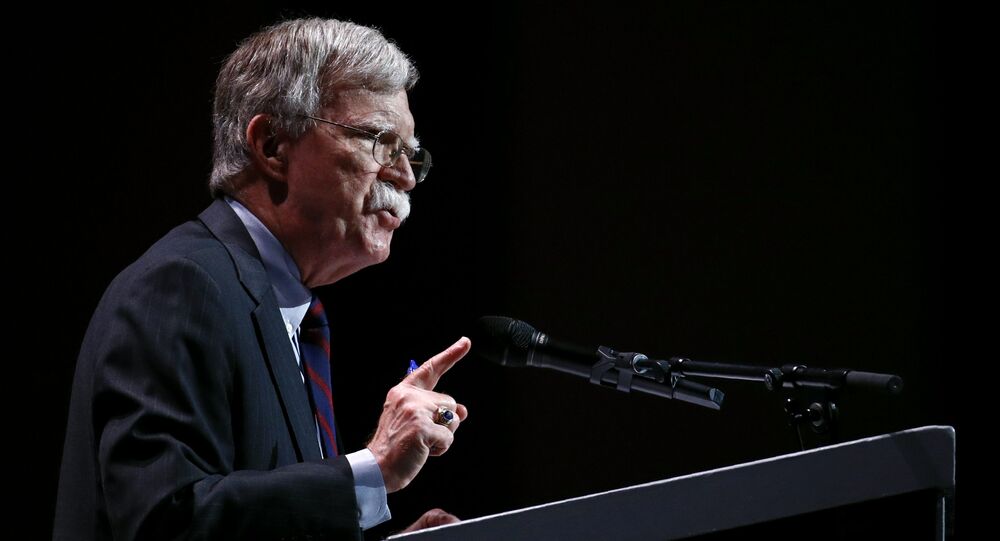 The remarks come amid ongoing tensions between Tehran and Washington which have been in place since US President Trump unilaterally abandoned the 2015 Iran nuclear deal in May 2018 and reinstated crippling economic sanctions against the Islamic Republic.

Former US National Security Adviser John Bolton has claimed that if President Donald Trump wins a second term, he may try to embrace Iran in a bid to clinch a new nuclear accord.

In a video conference interview with Israel’s Channel 13 on Friday, Bolton asserted that Trump was poised "to have a meeting with the Iranian leadership […] to talk about getting a new nuclear deal with Iran".

"Just as [North Korean leader] Kim Jong-un played Trump along in the Korea context, I worry that in a second term the Iranians might be able to do the same", Bolton said.

In this context, the former national security adviser referred to his job as US ambassador to the UN under ex-US President George W. Bush, saying that he believed in Bush's pledge not to allow Iran to obtain a nuclear weapon.

As far as Trump's promise to contain Tehran is concerned, Bolton said that he "doesn’t know" whether he should trust POTUS.

"I think [Trump] has his own definition of what amounts to honesty. He certainly has a lot of different versions of facts. They tend to come and go as they suit him. I found that very frustrating, I think foreign leaders find it frustrating. I'd rather have somebody more grounded in reality as president", the ex-adviser added.

US Exit From JCPOA Was Postponed Due to First Lady, Bolton Claims

The interview comes after the 23 June release of Bolton's book titled "The Room Where It Happened: A White House Memoir", in which he, in particular, argued that Trump postponed taking the US out of a landmark nuclear deal with Iran in May 2018 so the first lady could announce her Be Best initiative designed to advocate positive change in American families' well-being.

The memoir claimed that POTUS planned to announce the US withdrawal from the 2015 Iran nuclear deal, also known as the Joint Comprehensive Plan of Action (JCPOA) on 7 May 2018.

However, then-White House press secretary Sarah Sanders reportedly told Bolton that "First Lady [Melania Trump] had an event scheduled that day so we moved the withdrawal to 8 May [2018]".

Apart from Washington's pullout from the nuclear deal, Trump also announced the reinstatement of harsh economic sanctions against Iran at the time, in what was followed by Tehran saying exactly a year later that it had begun suspending some of its JCPOA obligations, including those related to uranium enrichment.

This added significantly to growing tensions between the two countries which escalated further after top Iranian general Qasem Soleimani was killed by a US drone strike in Baghdad authorised by Trump.

In the latest development, Iranian Foreign Minister Mohammad Javad Zarif blamed the US for violating the JCPOA and "bullying" others into doing the same.

Zarif also insisted that Washington had earned the "dishonour of being the first" nation "in UN history to punish law-abiding countries for not violating a Security Council resolution [2231]", a UN measure that approved the JCPOA and offered Tehran sanctions relief in exchange for its commitment not to pursue the production of nuclear weapons.