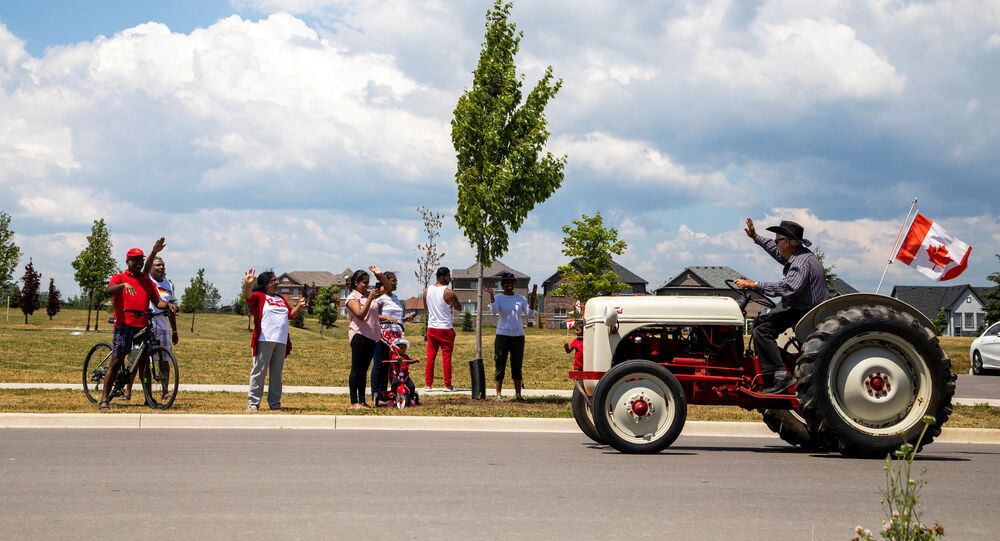 Each year, Canadians come together in celebration to mark their nation's holiday - Canada Day. Falling this year on Wednesday, the country's 153rd birthday will be uniquely quiet, as it makes moves to emerge from the coronavirus pandemic.

Canada Day is a federal national holiday that falls on 1 July every year, marking the day of the formation of the country by the formal union of three separate British colonies under the British empire in 1867.

The unification of Canada, Nova Scotia and New Brunswick into a single nation marks a significant historical step towards independence for the former colony and is celebrated throughout the country and by Canadians across the world.

​The Origins of Canada Day

The move followed a rise in independence sentiment throughout Canada. Residents of the colony demanded an interlinked transport network, control over national defence, and sought to end the conflict between French and British empires looking to colonise the region.

In 1866, a series of meetings between Canadian delegates in London and the British state led to the passing of the British North America Act on 1 July, establishing its self-governance.

Originally called 'Dominion Day', the holiday celebrates the day when Canada became a self-governing region as part of the empire. An attempt to establish the day as 'The National Holiday of Canada' in a 1946 private members bill was defeated.

It was eventually renamed with the passing of the 1986 'Canada Act', which gave the country full autonomy from London.

'Canada Day' had been used informally for years, while sentiment that the original name had colonial connotations pushed the eventual official renaming.

Supporters of the previous name argued that the name change was an infringement on tradition and previous attempts to drop the original title were rejected.

​Some suggested that Liberals were attempting to re-brand or re-define Canadian history. Columnist and professor Andrew Cohen described 'Canada Day' as a "crushing banality" and criticised it for its rejection of the past "laden with political correctness and historical ignorance".

Activists today use the date as mark of remembrance, to reflect on the construction of Canada as a country, as well as darker parts of the countries past like the 'Residential Schools', designed to "assimilate" native Canadian peoples into European colonial culture.

Canada Day 🇨🇦 Celebrate the country, but also remember its origins: the genocide of its Indigenous people. Also: Residential schools destroyed generations from the 1870’s - 1990. So while enjoying a holiday that celebrates a great nation be mindful of the ugly truths of history. pic.twitter.com/nsZTkwNMNV

​How do they Celebrate?

Following the passing of the British North America Act, historical accounts claim that the bell of the St. James Cathedral in Toronto rang out amid a display of fireworks and bonfires.

Happy Canada Day! Last year had the great pleasure of hosting a Canada Day celebration in #Erbil . Much different this year at home but I had the wonderful surprise of fireworks in my backyard. 🇨🇦🍾 pic.twitter.com/rxSsagolVY

​Today, Canadians mark the date with outdoor activities: parades, parties, fireworks, sharing of food between friends and family, and festivals.

Sporting events also used the day to light up stadiums with red and flag maple flags and patriotic flare.

As with most major events around the world, this year's celebrations have been hampered by the ongoing coronavirus pandemic currently enveloping the globe.

Canada is an amazing place to call home, and its people make it even better. We’re always there for each other - in good times and bad - and we always will be. And that’s worth celebrating. Happy Canada Day, everyone! https://t.co/SDC41cWOY0 pic.twitter.com/2OKNyxGEqe

​​While the government has lifted certain aspects of the lockdown, high summer temperatures have seen people, dressed in national colours, head to bars, restaurants, and beaches across the capital of Ottawa. Large-scale festivities planned at Major's Hill Park and Jacques Cartier Park, and smaller events in Barrhaven, Kanata and Orleans have been cancelled, however.

IT’S CANADA DAY!
Canadians are fiercely proud of their country and wear their pride inside on their heart.
Celebrations are all canceled due to COVID, but we can still bark about this big, wonderful, silly, kind country!#canada #CanadaDay #CanadaDay2020 #dogs pic.twitter.com/rSC4WE3mrI

​In their place, Canadian Heritage put together a virtual Canada Day Daytime Show and Canada Day Evening Show on social media which will see a series of national artists and collaborative performances for an online audience.

Now is the moment to mark this Canada Day together. From coast to coast to coast, let's unite more than ever to highlight this special virtual celebration. Happy #CanadaDay all!🎉🇨🇦 https://t.co/xdObwpCpZl pic.twitter.com/x9ki5PeIgE

​The Toronto Zoo, the Canadian Museum of Nature, the Agriculture and Food Museum and the Aviation and Space Museum, will all host a virtual event with exclusive looks into aerospace organisations, arts and crafts, facts about animals, and historical testimony unique to the country.

We're all celebrating #CanadaDay differently this year. Whether you're watching the @CdnHeritage virtual celebration or celebrating with family or friends (while physically distancing!), we wish you a very safe and happy Canada Day. #OhCanada #MusicalRide pic.twitter.com/Oe9uXTBQQJ

​Law enforcement will also police regulations at parks and beaches throughout the holiday, to make sure social distancing is adhered to during parties and celebratory events.