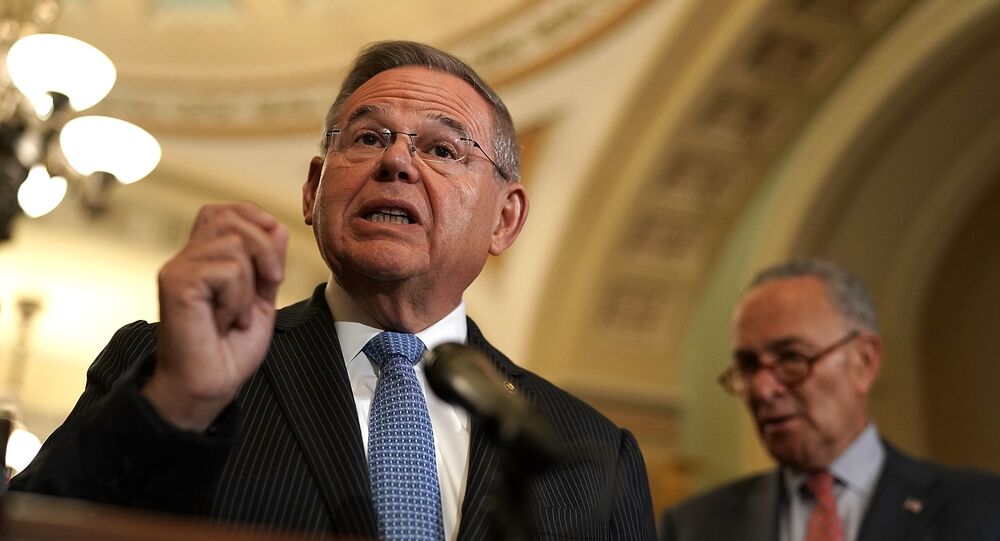 Senior Democratic leaders accused President Trump of "kissing up" to Russia and failing to act in the wake of Friday's story in the New York Times about an alleged Russian plot to pay Taliban militants bounties for the killing of US troops in Afghanistan. Moscow has denied the claims and blasted the paper over its evidence-free reporting.

New Jersey Senator Bob Menendez, ranking Democrat on the Senate Foreign Relations Committee, has formally introduced an amendment into 2021 National Defense Authorization Act legislation requiring the US to impose asset freezes against Russian President Vladimir Putin, Defence Minister Sergei Shoigu, and other Russian officials allegedly involved in the targeting of US and allied forces in Afghanistan, and banning their entry into the United States.

Among the other provisions of the 14 page amendment are banking restrictions on entities affiliated with the Russian defence sector, and expanded sanctions against Russian businessmen.

The amendment also requests the director of national intelligence to provide congress with information as to "whether or not the Government of the Russian Federation, or proxies of that Government, was responsible for offering bounties for the killing of members of the Armed Forces of the United States or members of the [NATO mission] in Afghanistan," and to inform lawmakers if senior US officials including President Donald Trump and Vice President Mike Pence were informed of any such activities.

Menendez's bill is the first of its kind amid calls by senior Democratic leaders this week asking the White House to respond to the serious allegations made in the New York Times story.

Russian presidential spokesman Dmitry Peskov reacted to the legislative proposal later Wednesday, saying Moscow has been baffled by recent events in Washington, DC relating to the Taliban bounty story. "There is a lot going on in Washington right now that is hard to explain," Peskov told Sputnik.

Trump stepped up his attacks on what he termed the "discredited @nytimes" earlier Wednesday with a pair of tweets in which he suggested that the story was "made up" to "damage" himself and other Republicans. Citing a Department of Defence assessment on the allegations, Trump emphasized that there was "no corroborating evidence" to back them up, and added that he was never briefed on the matter.

Earlier, anonymous sources told the New York Times that Russia's GRU military intelligence agency had offered cash payments to Taliban militants for killing US and coalition forces, and claimed that Trump knew about the claims since early 2020. On Tuesday, the newspaper issued a second report citing 'three officials familiar with the matter' alleging they had information on financial transactions between the GRU and a Taliban-linked bank account.

Russian officials dismissed the allegations, with Russian Ambassador to the United States Anatoly Antonov saying that the US newspaper had made its claims without providing any evidence, and suggesting that the story may be an attempt to obstruct "a normal, mutually beneficial dialogue between Russia and the United States." He added that the false reporting has already led to real-world consequences, with Embassy staff receiving threats in the wake of the report's release.

Before that, the Russian Foreign Ministry suggested the claims may have been concocted to force the United States to remain in Afghanistan to allow for US intelligence agencies to continue to make profits off the illicit drug trade and other illegal ventures.

Taliban spokesman Zabihullah Mujahid similarly rejected the claims made in the NYT report, saying the group does not cooperate with any foreign intelligence agency or country. The spokesman suggested the story may have been concocted by forces opposed to the Taliban-US deal signed in February aimed at ending the US military occupation of Afghanistan.