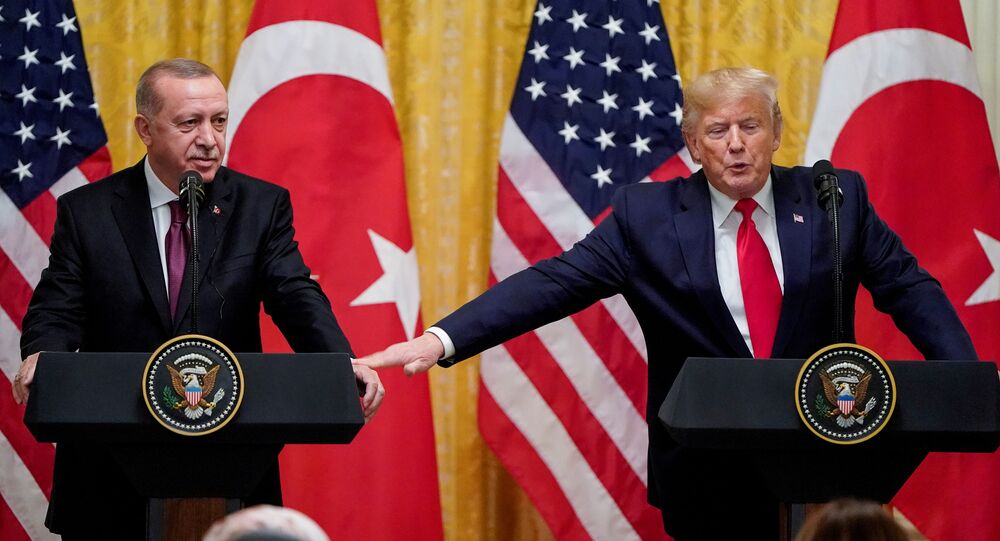 In his memoir published on 23 June, John Bolton claimed that US President Donald Trump was manipulated and easily influenced by the leaders of China, Russia, Turkey, and North Korea.

In a series of tweets on Wednesday, Fahrettin Altun, the Turkish president's communications director, lashed out at former US National Security Adviser John Bolton over what Altun described as false coverage of high-level contacts between Ankara and Washington.

"Recent publication of a book authored by a high-level former US official includes misleading, one-sided, and manipulative presentations of our leader President Erdogan’s conversations with US President Donald Trump", the Turkish official asserted.

He added that the purpose of "these mischaracterisations and falsehoods are driven by domestic political considerations as well as personal gain".

"We find it reprehensible that former high-level officials attempt to use serious diplomatic conversations and efforts to resolve outstanding issues between allies like the US and Turkey for their domestic political agenda", Altun tweeted.

Praising Erdogan and Trump’s efforts to "repair and keep stable the US-Turkey relationship despite deep differences", the Turkish official claimed that POTUS "has done a lot more listening to a key NATO ally than some of the previous administrations".

President Erdogan, at every opportunity, clearly outlines Turkey’s priorities and advocates for them vigorously. He has done that on issues such as the FETO members’ extradition, the PKK/YPG, and the Halkbank case both publicly and privately.

According to Altun, Erdogan "both publicly and privately" advocates for Turkey’s priorities, including those related to the Halkbank case, one of the stumbling blocks adding strain to already marred US-Turkish ties over their discrepancies on Syria and Ankara’s purchase of the Russian S-400 missile systems.

We are confident that the US-Turkey relationship will survive such efforts and even thrive at the end. President Erdogan will continue his frank, honest, and straightforward conversations with the US President Donald Trump.

Altun expressed confidence that US-Turkish relations will "thrive in the end" and that Erdogan "will continue his frank, honest, and straightforward conversations" with Trump.

The remarks came after Bolton claimed in his book published on 23 June that the Turkish president gave POTUS a memo saying that the Turkish state lender Halkbank was innocent. The office of the US Attorney for the Southern District of New York is currently investigating allegations that the bank evaded American sanctions against Iran.

Bolton also argued that "Trump then told Erdogan he would take care of things, explaining that the Southern District prosecutors were not his people, but were Obama people, a problem that would be fixed when they were replaced by his people".

Shortly before the publication of the book titled "The Room Where It Happened: A White House Memoir",  Bolton’s lawyers filed a motion in court to dismiss a Department of Justice (DOJ) lawsuit against the former US national security adviser aimed at blocking the release of the memoir for allegedly containing highly classified information.

This came as US Secretary of State Mike Pompeo blamed Bolton for "spreading a number of lies, fully-spun half-truths, and outright falsehoods", while Trump lambasted Bolton’s book as "a compilation of lies and made up stories, all intended to make me look bad".