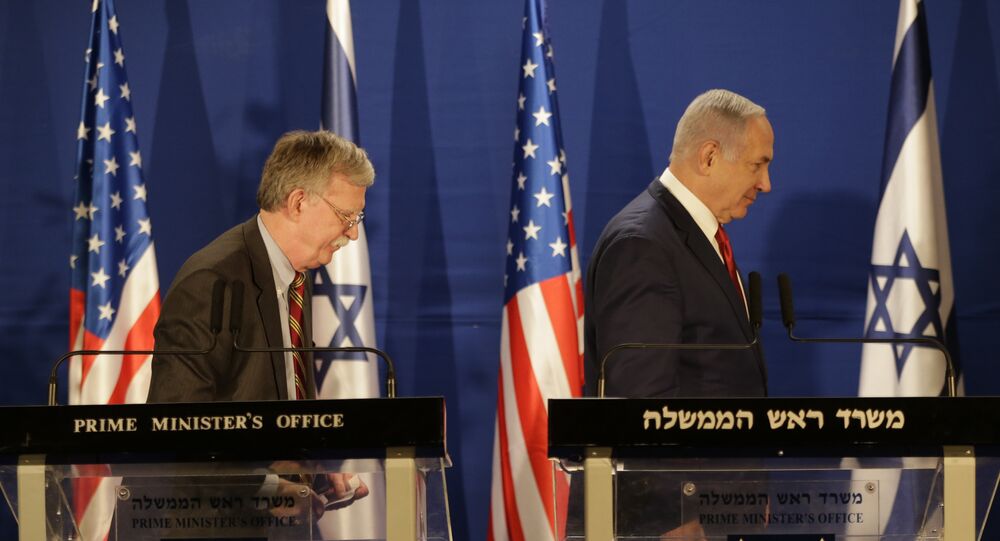 The former national security advisor’s new tell-all book, suggestively titled ‘The Room Where It Happened: A White House Memoir’, is expected to hit stores on Tuesday, with a judge ultimately refusing a Trump administration request to delay publication on national security grounds.

US President Donald Trump was prepared to back Israel if it moved to carry out strikes against Iran’s nuclear program, John Bolton has claimed.

Recalling a meeting he’d reportedly had with Trump in 2017, a year before beginning his 17 month-long stint as Trump’s national security advisor, Bolton said the president told him: “You tell Bibi [Netanyahu] that if he uses force, I will back him. I told him that, but you tell him again.”

“On Iran, I urged that [Trump] press ahead to withdraw from the nuclear agreement and explained why the use of force against Iran’s nuclear program might be the only lasting solution,” Bolton further recalled.

Putin Says Strikes Would Be Stupid

Also on the subject of possible Israeli strikes on Iran, Bolton wrote about a meeting he’d had with Russian President Vladimir Putin in October 2018, in which the Russian leader ostensibly told him that Israel “could not conduct military action against Iran alone because it didn’t have the resources or capabilities, especially if the Arabs united behind Iran.” Bolton found this sentiment to be “preposterous.”

According to the hawkish former Bush-era official, Putin also informed him that the US withdrawal from the nuclear deal wasn’t productive. In turn, Bolton claimed Tehran was “not in compliance with the deal” and had been working with Syria on a nuclear weapons program for over a decade.

In the book, Bolton recalled an August 2019 attempt by Iranian Foreign Minister Mohammad Javad Zarif to have an impromptu meeting with Trump at the G7 meeting in France. Zarif later alleged that Bolton and Israeli and Saudi officials did everything they could to stop him from talking to the president.

In his book, Bolton said he sent the president a note about Zarif’s imminent arrival, and got a note back that French President Emmanuel Macron had invited Trump to meet, with Trump expressing a firm interest in doing so. The national security advisor indicated that Netanyahu and Israel’s ambassador to the US similarly wanted to talk to Trump about the possible meeting, with Bolton himself suggesting that meeting Zarif would be a bad idea.

Trump did in fact back out of the meeting with Zarif at the last moment for unknown reasons, although according to Bolton, Trump son in law and Middle East peace plan architect Jared Kushner thought nothing would be lost from doing so. “These people had an attention span no longer than the deal in front of them,” he complained.

Trump Feels Boxed In by Own Staffed

According to Bolton, Trump had repeatedly asked to meet with Zarif, and other foreign officials, only to feel frustrated about being blocked from doing so by his own officials. “Trump often complained that people all over the world wanted to talk to him, but somehow they never got through. So not surprisingly, he eventually began musing about opening discussions with Iran,” Bolton recalled.

He added however that he felt Trump was exaggerating the extent that other world leaders wanted to talk to him, with Zarif and others allegedly “playing to Trump’s vanities.”

© AP Photo / Pablo Martinez Monsivais
Trump Branded EU's Jean Claude Juncker as 'Vicious Man Who Hates the US', Bolton Claims in Book
Bolton’s new memoir, expected to hit store shelves this week, discusses a range of topics, from US trade negotiations with China to Washington’s attempts to topple the Venezuelan government, to Trump’s supposed disdain for Macron, the war against Daesh (ISIS)*, negotiations with North Korea and a host of other subjects.

Administration officials have blasted Bolton over the tell-all book, claiming it’s packed with lies, half-truths and “outright falsehoods.” On Saturday, Trump called Bolton a “wacko” and a “washed up” official who should be made to “pay a very big price” for his move to release classified information.

Earlier, US District of Columbia District Court Judge Royce Lamberth greenlit the publication of Bolton’s book, saying the administration had no grounds to delay its release.