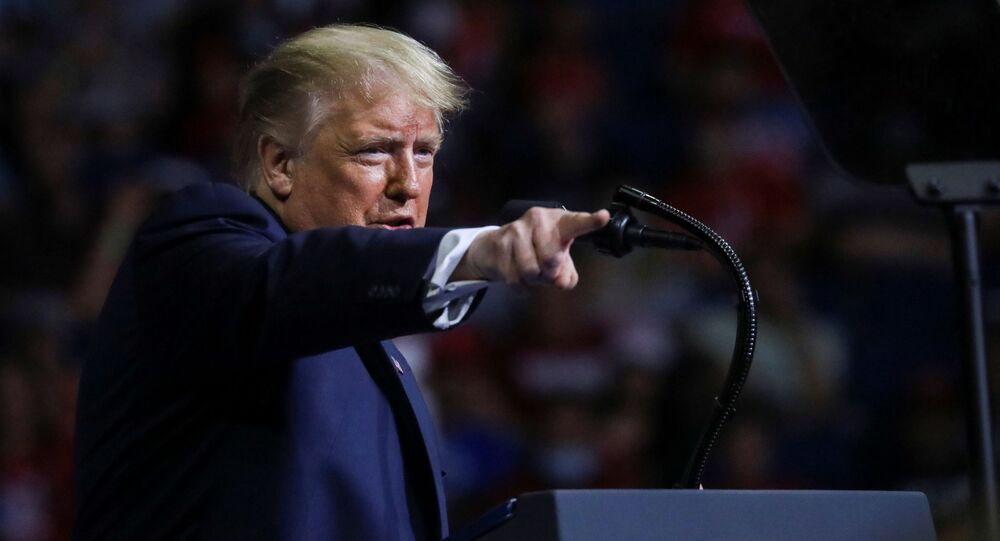 On 15 June Donald Trump announced his intention to bring down the number of US troops stationed in Germany, yet again faulting Berlin for failing to pay its share of the NATO spending burden and accusing it of treating the US "unfairly" on issues of trade.

President Donald Trump addressed his supporters at a presidential campaign rally in Tulsa, Oklahoma on Saturday, saying he intended to slash the number of US troops in Germany because the country doesn’t spend enough on defense and because it supports the Nord Stream 2 pipeline project with Russia, reported Bloomberg.

“We’re supposed to protect Germany from Russia, but Germany is paying Russia billions of dollars for energy coming from a pipeline, brand new pipeline… Excuse me, how does that work? said Trump at his first rally since the COVID-19 pandemic started sweeping across the country.

© REUTERS / LEAH MILLIS
U.S. President Donald Trump stands at the podium listening to his supporters cheer as he addresses his first re-election campaign rally in several months in the midst of the coronavirus disease (COVID-19) outbreak, at the BOK Center in Tulsa, Oklahoma, U.S., June 20, 2020

Nearing completion despite US sanctions, Nord Stream 2 is scheduled to carry up to 1.942 trillion cubic feet of gas per year from Russia to Germany through the territorial waters or exclusive economic zones of Denmark, Finland, Germany, Russia, and Sweden.
Trump earlier reiterated his NATO spending dispute with German Chancellor Angela Merkel.

Washington has long insisted that Germany is failing to meet its NATO defence spending obligations, urging it to comply with the 2 percent target for members of the North Atlantic Treaty Organization.

The US president lauded the German Chancellor as a “very good negotiator” but insisted Berlin both raise defence spending and pay for its alleged "debts" to NATO retroactively.

“They forget about all the money that wasn’t paid, I said what about the trillion dollars that you really owe. So, we’re negotiating. Let’s see,” said Trump.

The US President was referring to the NATO alliance’s defence spending target of at least 2 percent of Gross Domestic Product (GDP).

Earlier, on 15 June, President Donald Trump confirmed media reports that Washington sought to slash its military presence in Germany by more than half, to just 25,000 troops.

Currently, 34,500 US troops are stationed in Germany, along with 17,000 US civilians and 12,000 German citizens who work at military bases in the country.

However, US lawmakers introduced a bill in both chambers of Congress to block the administration from using federal funds for a troop pullout from Germany.

The bill underscored that the US should continue to maintain a robust military presence in Germany "so as to deter further aggression from Russia or aggression from other adversaries against the United States and its allies and partners."

The US has also pressured Germany to abandon the Nord Stream 2 pipeline, a joint venture of Russia's Gazprom and five European companies, claiming it would give Russia political leverage over Europe, and increase its dependency on Russian gas.

Berlin has been resisting the pressure, insisting that Nord Stream 2 is purely economic in nature. Despite being targeted with US sanctions, the pipeline project is nearing completion, with Russian President Vladimir Putin confirming it could be launched by late 2020 or early next year.