New Delhi (Sputnik): India’s Prime Minister Narendra Modi, while announcing a $266 billion economic stimulus package on 12 May in the wake of COVID-19, has called for a self-reliant economy. After a violent clash with China’s PLA in the Galvan Valley sector, India's ministries and traders are up in arms against Chinese contracts and products.

The Indian government fired a warning shot on Thursday by terminating a $62.8 million railway contract with the firm Beijing Signalling & Telecommunication as the first retaliatory step against China following the killing of 20 Indian soldiers in the Galvan Valley clash.

A senior minister in the Narendra Modi government, Harsh Vardhan, termed the decision as the "first salvo to teach a lesson" and said that it is a leap towards ensuring the use of Indian products everywhere. Next week, The Indian Telecom Ministry is set to hold a meeting with industry players after advising state-owned telecommunications enterprises, BSNL and MTNL, not to use Chinese equipment in 4G upgrades.

The country's 70 million traders under the umbrella of the Confederation of All India Traders have also made a public call to replace Chinese imports worth $13 billion by December 2021 with Indian goods.

Bilateral trade between India and China was to the tune of about $87 billion in the financial year 2018-19, according to the Indian Ministry of Trade and Commerce. However, it is lopsided heavily in favour of China, with India’s trade deficit running over $50 billion consecutively between 2016 and 2019.

Some of India's major imports from China between April 2019 and February 2020 were electric equipment worth $18.11 billion, heavy machinery and appliances ($12.78 billion), organic chemicals ($7.53 billion), and plastic articles and fertilisers, as per the ministry data.

Quantifying the overall Chinese investments in India, a Brookings India study titled "China Inc’s growing stake in India – China relations", stated last March that since 2014, there was an “influx of Chinese capital in India”.

The study, authored by Ananth Krishnan, visiting fellow, Brookings India, said, “Until that year (2014), the net Chinese investment in India was $1.6 billion. Most of the investment was in the infrastructure space, involving major Chinese players in this sector, predominantly state-owned enterprises. In three years, total investment increased five-fold to $8 billion, as per data from Ministry of Commerce in Beijing".

The study also points out that there was a "noticeable" shift from state-driven to market-driven investments from the Chinese private sector during the period.

© REUTERS / PLANET LABS INC
More Troops, Equipment in Galvan Valley as India Issues War Alert Along China Border – Gov’t Sources
As per an estimate, at least 74 percent of the mobile handset market, 45 percent of the smart TV market, and 12 percent of white goods are occupied by Chinese manufacturers.

China's venture capitalists, including multi-nationals like Alibaba and Tencent, have lapped up India’s start-up ecosystem and invested more than $4 billion in over 90 Indian start-ups, per an estimate.

Prof. Biswajit Dhar from the Centre for Economic Studies and Planning at Jawaharlal Nehru University believes that a knee-jerk reaction is uncalled for and that the government needs to decrease dependence on China in critical sectors like telecom and pharmaceuticals.

“As far as possible, drugs and medicines should be produced domestically. Similarly, in case of telecom, owing to grave security concerns, we need to focus on domestic manufacturing in the sector. Careful policy planning needs to be done in that direction”, Dhar told Sputnik, emphasising that it’s not possible to ban China in India immediately.

Since China has a huge footprint in the Indian economy, “in a free market economy, banning China is extremely difficult”.

He says that even if one opts for higher tariffs, “there are no indigenous substitutes available”.

“Do we have indigenous substitutes for telecom, pharma sector? Also, higher tariffs are detrimental to the consumer interest because eventually consumer has to pay higher prices”.

"India must desist from complete import substitution because it is highly resource intensive. We do not have that kind of financial resources and we will again have to be dependent on China. And given the fact that China is unreliable, you never know whether (it) will route its investments in India via Singapore or Mauritius", Dhar believes. 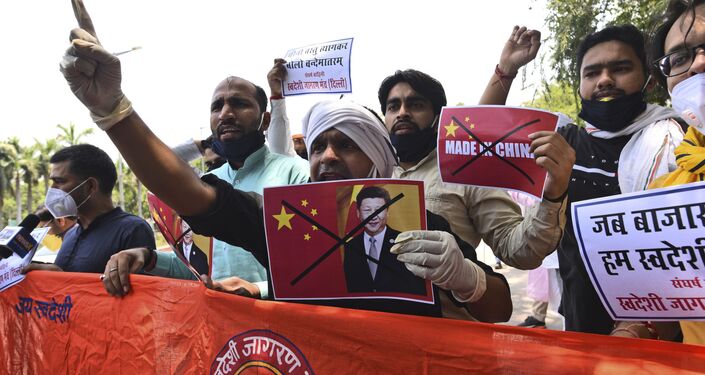 Trade figures between India and China reveal the massive gap that the former may have to fill if it is to plug the deficit, aiming at complete substitution, which seems to be the message from Prime Minister Modi’s call for a self-reliant Indian economy.

Starting in the 2000s, Chinese heavy equipment firm Sany and Liugong started making inroads in India – a market then dominated by American, Chinese, and Japanese companies. Sany built its biggest plant outside China near the Indian city of Pune in Maharashtra state in 2010.

China has a presence in the Indian steel sector too and is now trying to step on the gas with a foray into the automobile sector.

Shanghai-based SAIC has announced ambitious plans to both manufacture and launch tailor-made cars in India, including introducing its electric Sports Utility Vehicles into the Indian market with an investment of around $800 million.