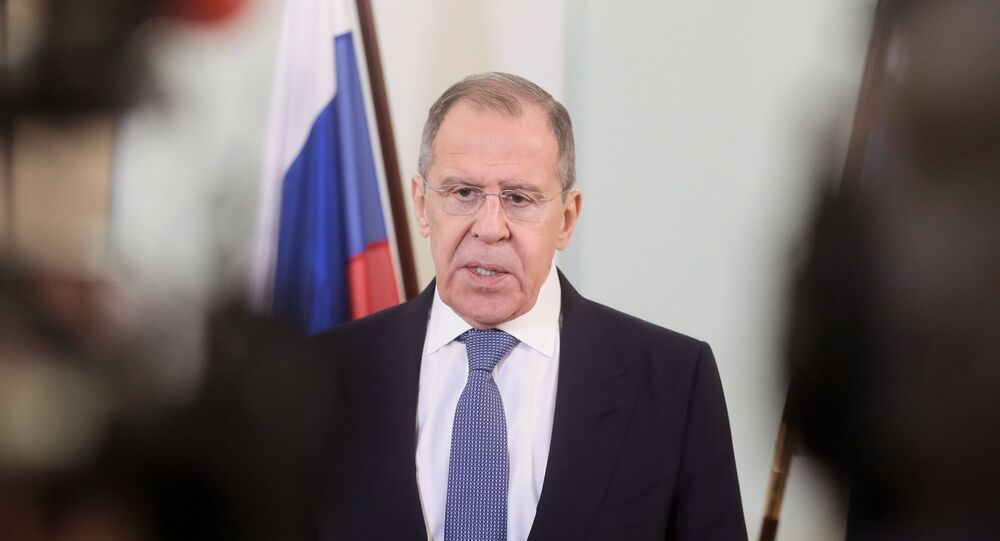 MOSCOW (Sputnik) - Russian Foreign Minister Sergei Lavrov said Tuesday the time might be right to consider restoring a six-party group that was working on security and peace in Northeast Asia, given the recent tensions between Seoul and Pyongyang.

"Russia was the coordinator of this group. And I think, given the developments in the region, it's time to think about reactivating it", the Russian foreign minister added.

The statement comes after Pyongyang confirmed that the inter-Korean liaison office in the industrial complex located in North Korea's border town of Kaesong has been completely destroyed by an explosion.

According to the official Korean Central News Agency (KCNA), a "terrific" explosion ruined the joint liaison office in the industrial zone at 05:50 GMT, which was in line with "the mindset of the enraged people" angered by activists from South Korea who have sent balloons with leaflets of anti-North Korean propaganda.

Relations between the two neighbours soured last week as North Korea threatened state-level action if Seoul failed to curb the anti-Pyongyang leaflet campaign, which was being carried out by South-based defectors. Kim Jong-un’s sister, Kim Yo-jong, said the counteraction would include demolishing the inactive South Korean industrial compound in Kaesong and withdrawing from the bilateral military agreements.

Russian Foreign Minister Sergei Lavrov also stated that Russia and the European Union agree that Israel’s annexation of part of the Palestinian territories could provoke a new round of violence.

"We reiterated our common assessment, our common position with the EU, that the implementation of [Israel's] plans to annex part of the Palestinian territories on the West Bank would jeopardize the prospect of a two-state solution to the Palestinian-Israeli problem, could provoke a new dangerous round of violence in the region", Lavrov said at a briefing following his talks with EU foreign policy chief Josep Borrell.

Lavrov and Borrell called for a direct dialogue between Palestinians and Israelis.

"We discussed the situation in the Middle East settlement, or rather, the impasse in which efforts to achieve this settlement have gone, and emphasized the importance of intensifying the consolidated efforts of the international community in order to try to resume direct negotiations between the Palestinians and the Israelis under UN auspices as soon as possible to resolve all issues of the final status and the achievement of a comprehensive peace agreement", Lavrov said.

According to US President Donald Trump's so-called "deal of the century" unveiled in late January, Israel is to annex land in the West Bank and the Jordan Valley. Trump's deal proposes a two-state solution in the region that would allow for the creation of a demilitarized Palestinian state. Israeli Prime Minister Benjamin Netanyahu's unity government has supported the plan, while most of the Arab countries have totally rejected the proposal.

In late May, Palestinian Authority President Mahmoud Abbas terminated all treaties with the US and Israel in response to the annexation announcement.

Lavrov refrained from commenting on the partial withdrawal of US troops from Germany while affirming Moscow's readiness to resume security dialogue with the North Atlantic Treaty Organisation.

"It's a topic I don't even want to comment on. I will only say that we are in favour of resuming a normal dialogue with all the countries that are members of the North Atlantic Alliance on the military side, in order to have a comprehensive consideration of all the issues related to ensuring military and political security on the European continent, [as well as] in the Euro-Atlantic region in a broader context, based on objective analysis, on an objective assessment of the existing risks and threats", Lavrov said.

US President Donald Trump on Monday confirmed Washington's plans to reduce its forces by approximately 9,500 troops as a penalty for Berlin's alleged failure to allocate two percent of its budget on defence, per NATO regulations.

Earlier in the month, the Russian military warned about a heightened NATO activity near the Russian borders.