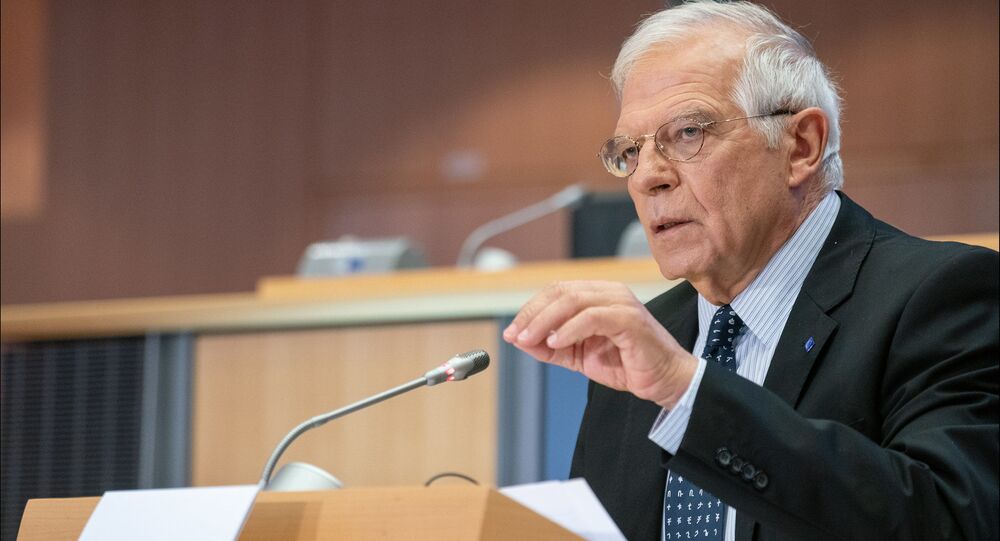 Arguing that China now plays an "ever-growing role in global politics", Josep Borrell said that the EU has "great interest" in working together with Beijing "on the many issues where its role is essential".

The EU High Representative for Foreign Affairs Josep Borrell has announced that the European Union should chart its own course even as relations between the United States and China "are set on a path of global competition, regardless of who will be in the White House next January".

As the South China Morning Post points out, Borrell delivered this statement in his blog mere hours before he, along with 27 foreign ministers from EU member-states, was expected to hold a videoconference with US Secretary of State Mike Pompeo.

Borrell noted that with tensions between the US and China becoming "the main axis of global politics, the pressures to 'choose sides' is increasing", and added that EU members have divergent views on the matter, as "some push for alignment, others for equidistance".

"We should adopt a strategic approach, meaning we must uphold and defend our own interests and values", Borrell argued. "We must use as compass not the expectations or pressures from outsiders, but what we as EU want and need".

He suggested that "we as Europeans" should "do it 'My Way', with all the challenges this brings".

"The European Way for sure includes working with like-minded to keep the multilateral system as a space for cooperation, even if great powers use it increasingly as a battleground", Borrell explained.

His opinion was echoed by UK Secretary of State for Foreign Affairs Dominic Raab who said his country seeks a "balanced approach with China".

The EU High Representative for Foreign Affairs wrote that as China "is playing an ever-growing role in global politics" the European Union has "great interest in working together on the many issues where its role is essential, from the recovery of the pandemic to climate change and sustainable connectivity".

"We also want to work with China on issues where we are apart but where good faith negotiations can produce good outcomes for both sides", he added.

Earlier this year, the United States extended the ban it imposed against a number of Chinese companies, such as Huawei and ZTE, that were added to an Entity List last year, with US officials citing national security concerns.

The Trump administration previously accused Chinese companies on a number of occasions of being used to spy for the Chinese government. Beijing has repeatedly denied such claims.

In 2018, the US and China became embroiled in a trade conflict which started when US President Donald Trump slapped tariffs on Beijing, prompting a retaliatory move; on 15 January, both sides signed the so called Phase One Deal on a broader trade agreement that was expected to pave the way towards ending the conflict.