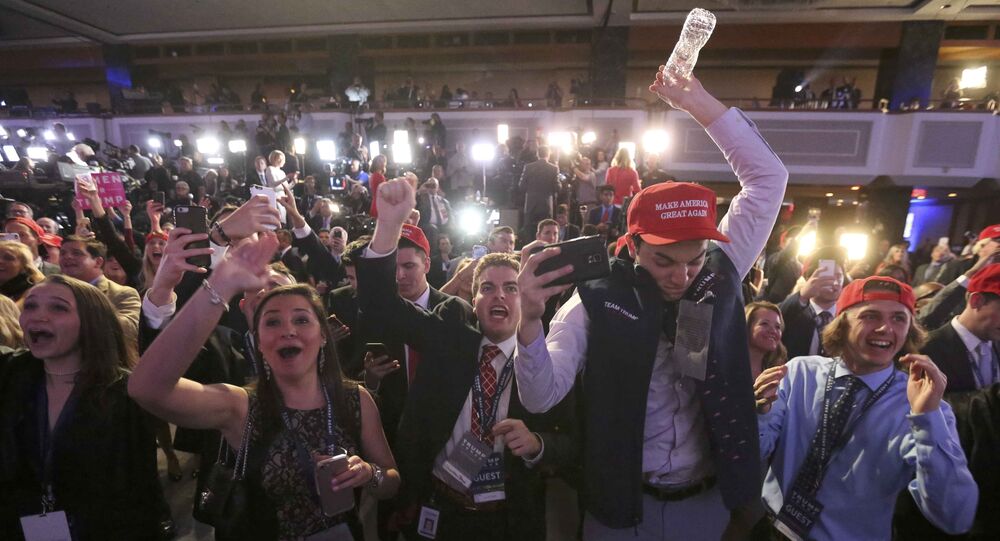 ‘His Base of Support Does Not Move’: Iran’s Zarif Explains Why Trump Has Good Shot at Reelection

The unexpected political analysis from the foreign minister of one of Washington’s greatest geopolitical adversaries comes in the wake of recent polling in the US showing former Vice President Joe Biden leading Donald Trump by as much as 10 points ahead of the November election.

“The biggest mistake in human sciences is to predict, especially in fluid and grave conditions. But allow me to venture a prediction that Mr. Trump’s reelection chances are still more than 50 percent,” Zarif said in an interview on Instagram Saturday.

“Of course his chances have seriously decreased compared to four or five months ago,” the Iranian diplomat noted. “But Mr. Trump has a 30-35 percent base [of supporters] that has not moved and, as long as this base does not move, there is still a chance of his reelection.”

The sobering prediction by Zarif, whose country Trump has mercilessly sanctioned and threatened throughout much of his three-and-a-half years in office, comes in the wake of polling showing that presumptive Democratic nominee Joe Biden leads Trump anywhere from four to ten points ahead of the November 3 election.

© AP Photo / Ric Feld,File
CNN Mocks Trump Camp for Demand it Withdraw Poll Showing Biden Leads President in 2020 Race
It’s worth recalling that Trump polled below former Senator Hillary Clinton throughout the 2016 race as well, only to defeat her in an unexpected upset, accounted for by the Electoral College system, and a strong show of support in the Rust Belt states.

This time around, Trump has accused his opponents of attempting to suppress his supporters through issuing “fake” polls, and sent CNN a cease and desist letter after the publication of a “skewed” poll showing him a whopping 14 points behind Biden.

In the Saturday interview, Zarif suggested that Trump has probably realized that his campaign of “maximum” pressure against Iran is a failure, but could not admit it. “I don’t think Trump believes anymore in talk that the Islamic Republic is about to collapse. But he keeps repeating his mistakes. It seems that they [the US] know they have committed errors but don’t know how to correct them,” he suggested.

As Iran’s top diplomat, Zarif has sparred with Trump repeatedly over US foreign policy, often taking to Twitter, Trump’s favourite platform, to get his message across to the US president.

After reaching a post-Iranian Revolution high in 2015 with the signing of the Joint Comprehensive Plan of Action nuclear deal, relations between Tehran and Washington took a turn for the worse following Trump’s election in 2016. In May 2018, following lobbying by the Israelis, Trump withdrew the US from the nuclear deal, and slapped Iran with tough energy and banking sanctions. In addition, the US threatened to introduce secondary sanctions against any country doing business with the Islamic Republic, prompting many of Tehran’s European and Asian partners to stop purchasing Iranian oil.

Since 2019, the two nations stepped back from the precipice of war on two occasions – once when Iran shot down a sophisticated US spy drone over the Strait of Hormuz in June 2019, and again in January 2020, when the US assassinated Revolutionary Guards General Qasem Soleimani in Baghdad, prompting Iran to pound US bases in Iraq with missiles. Tensions began escalating again in April after the US Navy complained that its ships in the Persian Gulf region were being “harassed” by small Iranian gunboats. So far, further incidents have been avoided.

Happy Birthday, Mr. President. Or is It? Donald Trump Turns 74