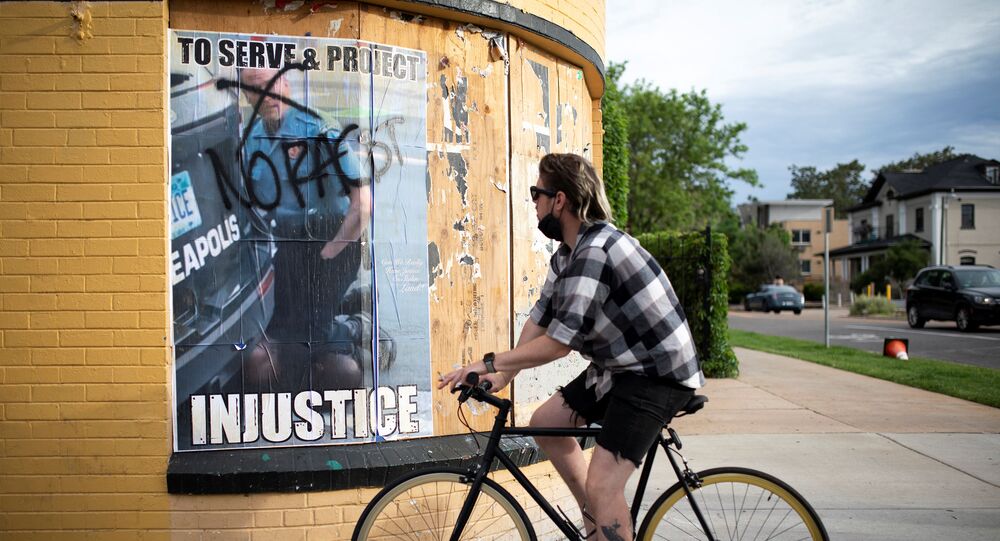 Iran to Trump: ‘You Will Soon Kneel in Front of Iranian Nation’ for Policy of Economic Terrorism

Tensions between Tehran and Washington escalated dramatically in 2018, after the Trump administration withdrew from the Iran nuclear deal and slapped the Islamic Republic with tough energy and banking sanctions, attempting to bring its energy exports down “to zero.”

Iranian Foreign Ministry spokesman Abbas Mousavi has taken a shot at Washington amid the ongoing anti-racism and police brutality protests rocking America after the police killing of African American George Floyd, accusing the US government of having a ‘knee on the neck’ approach to both its own people and other countries.

“A government whose policy is relying on ‘knee on neck’ of either its own people or others around the world should indeed [be] happy with #EconomicTerrorism and pressure on the public. But you see that not the Iranians’ neck, but your knee was wrung. You will soon kneel in front of the Iranian Nation,” Mousavi tweeted, responding to Trump administration Iran special representative Brian Hook’s recent comments about the US being “happy with the results of the sanctions imposed on Iran.”

A Govt whose policy is relying on 'knee on neck' of either its own ppl or others around the 🌍 should be indeed happy w/#EconomicTerrorism & pressure on the public. But you see that not the Iranians' neck, but your knee was wrung. You will soon kneel in front of Iranian Nation. pic.twitter.com/Hrxqq4uLqW

Speaking to Al-Arabiya on Wednesday, hook boasted that US sanctions against Iran have denied Tehran some $50 billion in revenues each year, and added that the pressure was “going to continue,” and was “not sustainable for the Iranian regime.”

Also on Wednesday, Iranian President Hassan Rouhani blasted the Trump administration using the same ‘knee on neck’ analogy, suggesting that Floyd’s killing was “basically the US policy,” and not just an isolated incident.

“They have always been like this throughout history. They have pressed their knee on the neck of every oppressed person they have found in order to kill him. This is their policy, not the policy of a single cop in a single city. This is basically the US policy,” Rouhani said in a cabinet meeting.

Rouhani added that when it comes to US pressure against Iran, Iran “smashed their knee with the giant sledgehammer of national unity and solidarity,” leaving the US with “no knee anymore to put pressure on the Iranian nation.”

Tensions between Iran and the US began escalating in 2018 after the Trump administration’s unilateral withdrawal from the 2015 nuclear deal. In 2019 and 2020, the two nations stepped back from the brink of war twice following a series of oil tanker sabotage incidents and ship seizures in the Persian Gulf culminated in the June 2019 shootdown of a $220 million US drone, and the unprovoked January 2020 assassination of a senior Iranian general in Baghdad, which was followed by Iranian missile strikes on US bases in Iraq which left over 100 US troops with traumatic brain injuries.

Tensions began escalating again earlier in April when the US Navy complained about Iranian gunboats’ “dangerous” “harassment” of its massive warships in the Persian Gulf region. In May, the US Navy warned that any armed vessels approaching within 100 meters of a US ship would be designated as a “threat and subject to lawful decisive measures.”