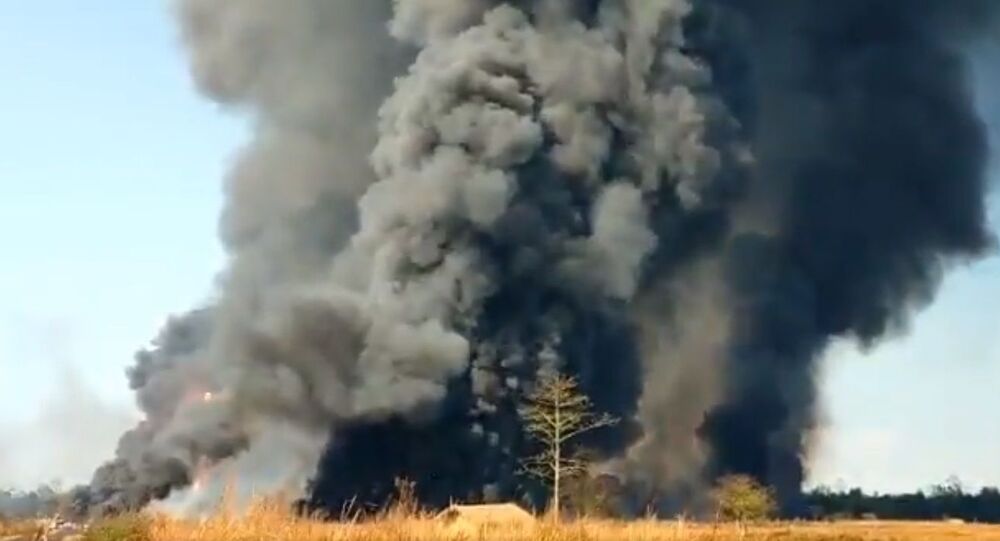 New Delhi (Sputnik): The flames erupting from an Oil India Limited (OIL) natural gas well in the northern Indian state of Assam’s Tinsukia can be seen from a distance of 2 kilometres since catching fire earlier in the day. Nearly two weeks ago the well experienced a blowout and a team from a Singapore-based firm has been called in to control it.

A massive fire erupted at an oil rig in Assam's Baghjan on Tuesday afternoon followed by an explosion. The oil well has been leaking gas uncontrollably since a blowout on 27 May.

Thick plumes of smoke emanating from the scene of the explosion can be seen from several kilometres, posing a danger to the nearby eco-sensitive Maguri Mottapung wetland and Dibru Saikhowa National Park.

Explosion occurred at OIL Baghjan gas pipeline in Assam.Thousands become homeless not to mention of the pollution caused.This is the outcome of unwise exploration of nature in name of development. pic.twitter.com/jepJrh1aLw

Baghjan - an oilwell owned by OIL had been leaking blowing gas since May 27. The leak today led to this explosion.
Funfact: Prakash's ministry has allowed the same OIL to drill for hydrocarbon testing in Dibru Saikhowa National Park in Assam. The Park is close to this Oil Well. pic.twitter.com/AIXmX3c5MM

Around 2,500 people have been evacuated from adjoining villages and taken to relief camps by the National Disaster Response Force (NDRF).

"The fire broke out at 1:40 p.m. at the site. The reason for the outbreak has not been ascertained yet. Apart from a fireman from the Oil and Natural Gas Commission (ONGC), who sustained a minor injury, no one else has been injured", stated Senior Manager Jayant Bormudoi of OIL.

The public sector company, OIL has also announced financial relief of INR 30,000 to each to the affected families.

A team from Singapore, Alert Disaster Control, reached the blowout area on Monday to assess the reason and control the situation. The authorities at OIL were digging a water reservoir and carrying out a continuous spray of water to cool down the leakage.