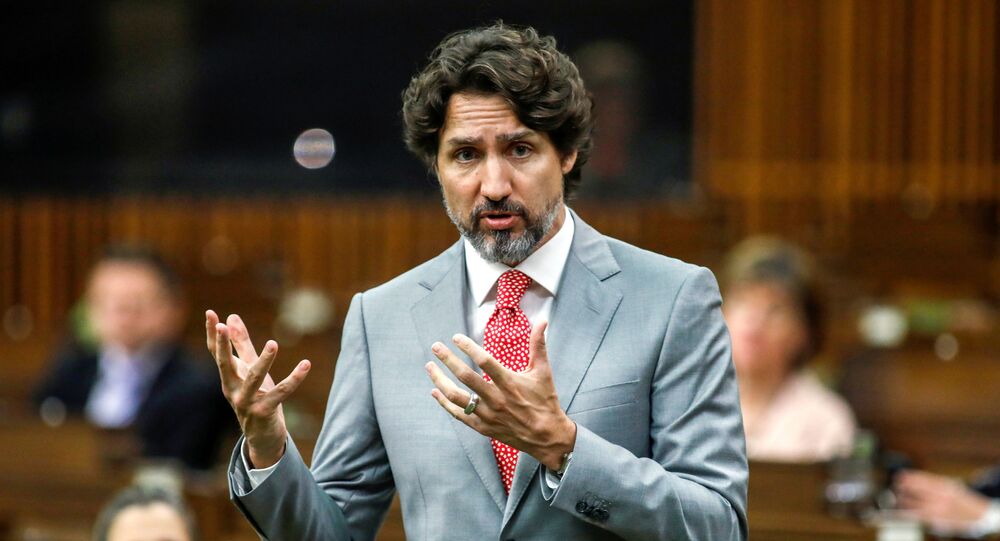 Earlier, amid protests sweeping the US after the death of African American man George Floyd in police custody, Canada’s Prime Minister Justin Trudeau seemed reluctant to address US President Donald Trump's call for military action in connection with the violent developments.

Canada’s Prime Minister Justin Trudeau took a knee on Friday, in a show of solidarity with a peaceful rally in support of the Black Lives Matter movement in the US and over the death of African American George Floyd, who died in police detention in Minneapolis.

Trudeau joined the crowd on Parliament Hill, as those gathered marked 8 minutes and 46 seconds of silence in memory of Floyd.

A video of George Floyd's arrest that went viral on social media had shown a white police officer, Derek Chauvin, asphyxiating and subsequently killing him by shoving his knee into Floyd's neck for almost nine minutes after he had been restrained.

In the footage Floyd was audibly heard saying he could not breathe.

As Trudeau, flanked by security guards and wearing a face mask joined demonstrators outside the Canadian parliament, he clapped and nodded along with other speakers and chants at the gathering.

While his kneeling – a symbolic gesture adopted by protesters against police brutality and associated with American football star Colin Kaepernick, who started the “take a knee” national anthem protest – was hailed by his supporters, it was also slammed by critics as “hypocritical”.

​Hecklers could be heard during the rally shouting “Go home, blackface,” referring to earlier surfaced photos of Trudeau wearing the controversial makeup on multiple occasions.

Netizens on social media were split in their response. Some slammed Trudeau for his “hypocritical” actions.

Won't sit in parliament because the risk from coronavirus is to great.

But will attend an anti-racism rally standing shoulder to shoulder with a couple thousand people becuase, photo op.

Half black face he really is growing.

Does he realize how stupid and hypocritical he looks? Probably not

Justin Trudeau is a Narcissistic maniac. He never thinks he had done anything wrong.

​Supporters of the Canadian Prime Minister rallied in his support.

Thank goodness we have Trudeau and not Trump. Great PM

So Trudeau ’s photo op went well.
Yes it did. And it reflects his values, and most of #Canadians. Not like yours, I suspect...

​As over 20 US states activated the National Guard to quell ongoing violent protests that erupted in the country after the death in police detention in Minneapolis of African American George Floyd on 25 May, Justin Trudeau faced a barrage of criticism online after he was perceived as having a hard time voicing his stance in regard to US President Donald Trump's response to the protests across the country.

The prime minister of Canada... pic.twitter.com/ok8Cr0cwBg

​In a statement delivered from the Rose Garden of the White House on 1 June, Donald Trump said he would mobilize every available federal force both “civilian and military” to put an immediate end to the violent protests sweeping the nation.

When asked by a journalist about Trump's call for military action, the Canadian politician displayed "reluctance" and took a 21-second pause before answering.

At the time, netizens were split, with some believing Trudeau was "left speechless" by the US president's words, while others shamed Trudeau for not criticising Trump directly.

Trudeau has been fending off criticism over his handling of issues of discrimination towards black and indigenous people in Canada, too, alongside earlier scandals rooted in his youthful transgressions, when images appeared online showing him wearing “blackface” makeup on various occasions.