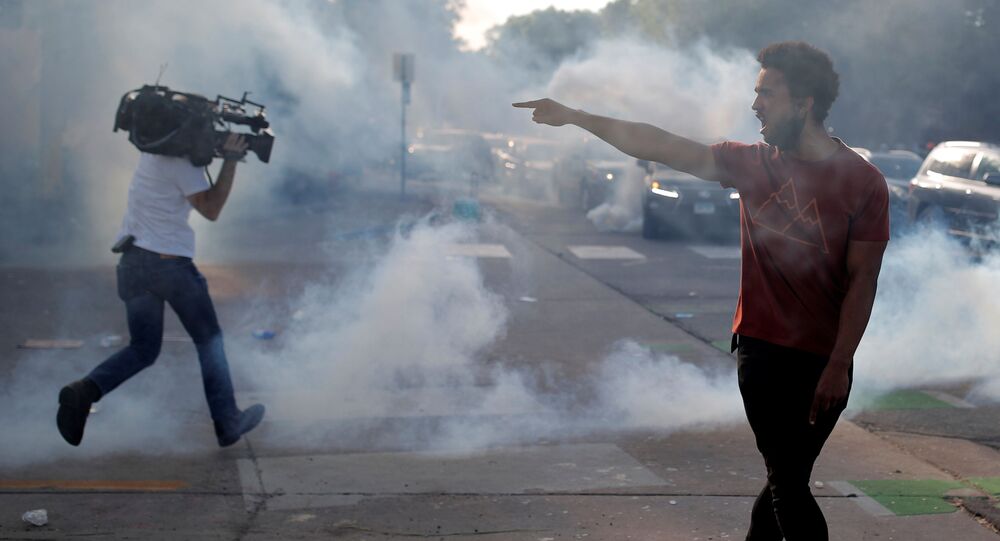 Several journalists from different countries have been attacked by US police while covering the ongoing protests over the death of George Floyd.

UN High Commissioner for Human Rights Michelle Bachelet has called on US authorities to ensure that "reporters can do their work free from attacks or repression" during the Floyd protests.

New York City Mayor Bill de Blasio has commented on the matter, saying that journalists, including those covering the ongoing nationwide protests in the United States, should never be detained by police unless they violate the law.

"Unless there is an absolutely abhorrent situation, where a journalist commits an illegal act, there should be no condition under which any journalist is ever detained by the police in this city or any city in the United States of America. It is in our Constitution - the freedom of the press - it must be honoured, it should never be anything that compromises that", de Blasio said.

He also stated that law enforcement must investigate any incident in which a reporter faces inappropriate treatment at the hands of the police.

The American Civil Liberties Union has said in a statement that it has filed a lawsuit “on behalf of journalists who were targeted and attacked by Minneapolis and Minnesota police”.

The statement comes after OSCE Representative on Freedom of the Media Harlem Desir urged US authorities to ensure the safety of journalists covering the protests. Stephane Dujarric, the spokesperson for the United Nations secretary-general, said that all such incidents should be investigated.

Mass protests have been ongoing in Washington, DC and numerous other cities in the United States since the death of African-American man George Floyd in police custody in Minneapolis, Minnesota on 25 May. The protests soon turned into riots, complete with arson, looting, and clashes with police.

Journalists Who Have Been Attacked by US Police During the Riots

The wave of violence across the US has affected members of the media reporting during the events.

On 1 June, Sputnik journalist Nicole Roussell said she was fired at by police while covering protests in Washington, DC, despite identifying as being a member of the media. A stinger grenade left a couple of welts on her hip and thigh.

A day before that, the Russian Embassy in the United States sent a protest note to the US State Department after a Minneapolis police officer pepper-sprayed RIA Novosti reporter Mikhail Turgiyev in the face. Turgiyev was attacked along with a VICE Magazine crew after the protests ended and all journalists identified themselves as being members of the media without resisting the police.

© REUTERS / TOM BRENNER
Trump Calls on Police to 'Get Tough' Amid Raging Protests Over George Floyd's Death
On the same day, police in Minneapolis opened fire at a media team from the German broadcaster Deutsche Welle that was attempting to cover the ongoing protests in the northern city. Stefan Simons and a film crew were shot at by police on Sunday evening as they tried to report on an incident that saw a man drive a tanker truck into a crowd of thousands of people on a Minneapolis highway.

On 30 May, CNN reporter Omar Jimenez and an accompanying media team were arrested and later released by law enforcement officers while attempting to cover the riots.

The large-scale riots in the United States were triggered by the death of African-American man George Floyd in police custody in late May. Video footage of his detention, which has been circulating online, showed Floyd saying that he could not breathe as a police officer knelt on his neck for over eight minutes. A county examiner in the US state of Minnesota in a medical report ruled that Floyd's death was a homicide.