New Delhi (Sputnik): India is set to receive a portion of its Rafale jet order in July 2020 under an inter-governmental agreement signed between New Delhi and Paris. The Rafale jets will come with various India-specific modifications, boosting India’s combat capabilities.

Indian Defence Minister Rajnath Sing has expressed his gratitude to the French Armed Forces for ensuring the timely delivery of Rafale aircraft despite a weeks-long halt in production due to the COVID-19 lockdown.

"We also appreciated the efforts made by the armed forces of India and France in fighting the COVID-19 pandemic. France has affirmed its commitment to ensure the timely delivery of Rafale aircraft despite the challenges posed by the COVID-19 pandemic", said Singh on Tuesday. 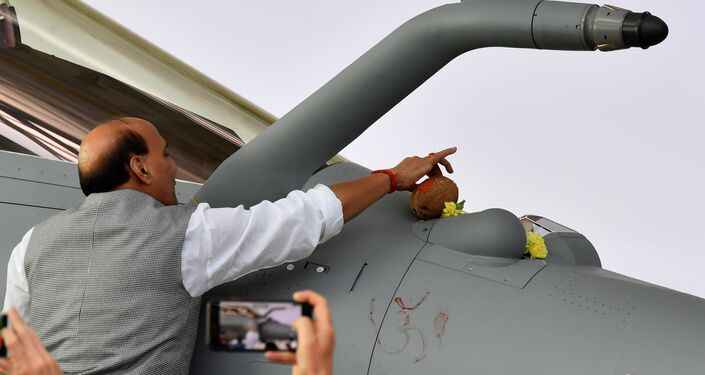 “Had a telephonic conversation with French Minister of Armed Forces, Ms Florence Parly today. We discussed matters of mutual concern including the COVID-19 situation, regional security and agreed to strengthen bilateral defence cooperation between India and France", he added.

French Ambassador Emmanuel Lenain also confirmed the timely delivery of aircraft on 24 May as apprehensions were raised over a possible delay due to the surging coronavirus cases in the country. France is reeling with 189,220 coronavirus cases with 28,833 deaths.

The Rafale jet has the advantage of carrying a range of potent weapons. The mainstay of the weapons package is the European missile maker MBDA's Meteor beyond visual range air-to-air missile and Scalp cruise missile.

The jets are contracted to be made available by 2022 while the first four Rafale are scheduled to arrive in India by July 2020.