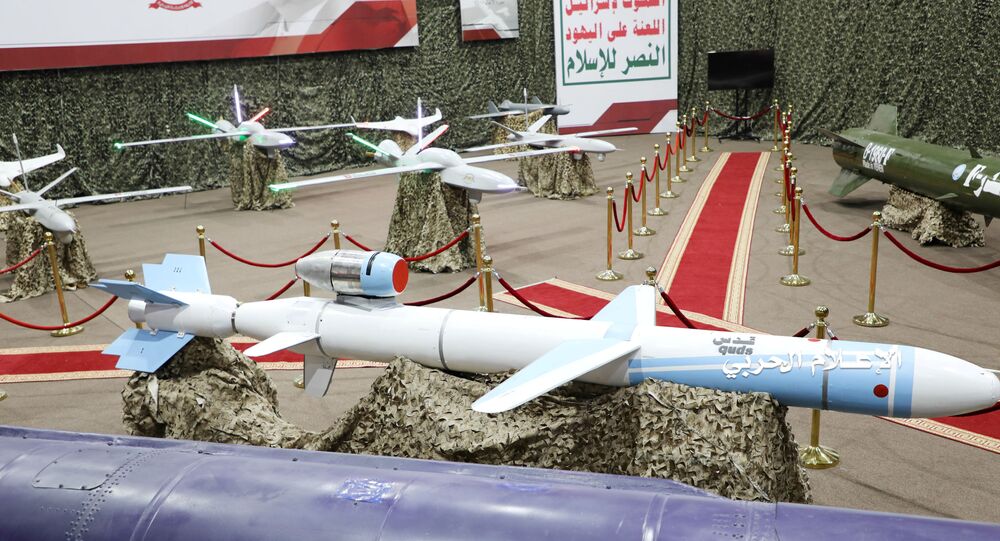 The Saudi Arabia-led coalition has been waging a war against Yemen’s Houthis for five years now, but with little success, as the group continues to control roughly half of the country and launches drones and missiles to attack Saudi infrastructure, including oil refineries.

The air defences of the Saudi-led coalition have shot down two drones flying towards Saudi Arabia that were launched by Yemen's Houthis, the Saudi Press Agency reports, citing a coalition spokesman. The coalition claims the drones were targeting "civilian objects" in the Saudi city of Khamis Mushait.

The statement comes on the same day as the Houthis accused the Saudi-led coalition of conducting 30 intensive air raids in the Yemeni provinces of Marib, Saada, and Hajjah. Earlier, on 30 May, the Houthis reported 111 Saudi air raids over the course of two days.

© AP Photo / Anonymous
In this image made from a video broadcast on the Saudi-owned Al-Arabiya satellite news channel on Saturday, Sept. 14, 2019, a man walks through a parking lot as the smoke from a fire at the Abqaiq oil processing facility can be seen behind him in Buqyaq, Saudi Arabia. Drones launched by Yemen's Houthi rebels attacked the world's largest oil processing facility in Saudi Arabia and another major oilfield Saturday, sparking huge fires at a vulnerable chokepoint for global energy supplies

The apparent clash comes as the Saudi-led coalition, which has been waging a war against the Houthis since 2015, announced a unilateral ceasefire after a corresponding call from the UN in light of the ongoing global coronavirus pandemic. Riyadh announced a ceasefire on 8 April, but it was violated soon after by the Houthis launching a rocket towards the kingdom.

The Saudi-led coalition intervened in Yemen's internal conflict after the Houthis ousted President Abd Rabbuh Mansur Hadi in 2014 and seized control over the capital. Hadi and forces loyal to him retreated to the city of Aden and have since then been trying to push the Houthis back without any progress, even with support from the Saudi-led coalition, which has been trying to reinstate the Hadi government's control over the entire country.