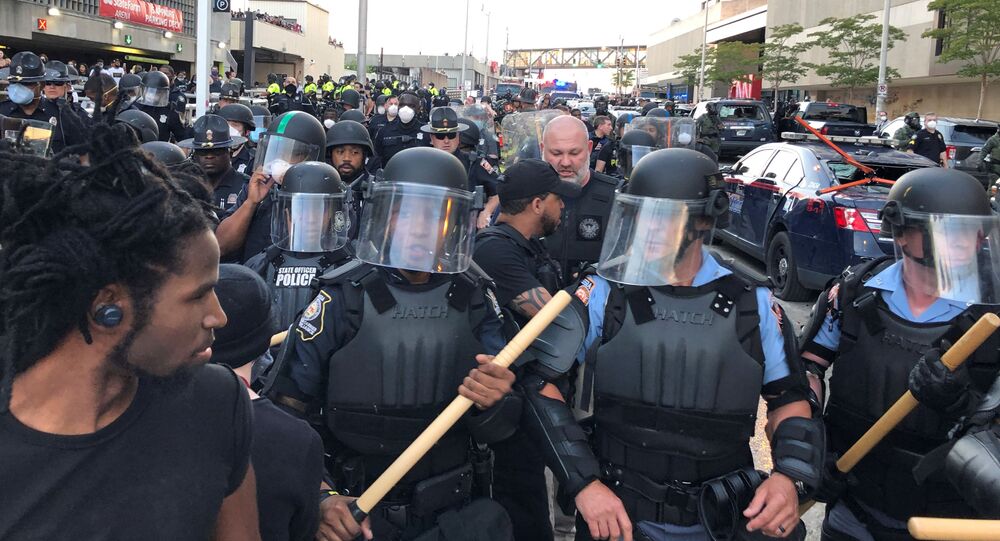 Chinese Officials, Media Lash Back at US Over Hong Kong Issue Citing Crackdown on Minneapolis Riots

After condemning China for over a year for purportedly oppressing the human rights of Hong Kong residents, the US itself has been accused of engaging in heavy-handed tactics in response to the demonstrations taking place in its own cities.

Chinese media outlets and authorities slammed back at the US over its announced intention to scrap the privileged status of Hong Kong over a national security law scheduled for approval by Beijing. The piece of legislation, which sparked Washington's discontent, comes as a response to the riots in Hong Kong in 2019, many of which turned violent, and bans activities directed against state unity.

Back in 2019, the US was harshly condemning the police response to street riots. But in 2020, the Chinese Global Times couldn't help but notice that any American claims of police brutality in Hong Kong pale in comparison to the way the US handles its own protesters in Minnesota and other cities, hinting at Washington's hypocrisy on this matter.

"Hong Kong’s rioters and police should carefully watch how the 'democratic US' deals with the chaos in Minnesota", the newspaper wrote.

The Central Committee of the Communist Young League also recalled the US criticism from back in 2019, when House Speaker Nancy Pelosi called violent Hong Kong clashes "a beautiful sight to behold". The League's page on Chinese social media Weibo published a photo of US protesters looting local malls and shops accompanied by a caption citing the notorious phrase of the speaker. The post reportedly went viral on social media.

A Hong Kong government spokesman, in turn, used the occasion to condemn the US move to strip the island of economic preferences, accusing Washington of engaging in an attempt to "smear and demonise" Beijing's rightful actions aimed at maintaining order in its semi-autonomous island.

© Sputnik / Stringer
Moscow Strongly Condemns Use of Riot Control Weapons Against Reporters by US Police
Hong Kong enjoys wide autonomy, having its own laws and essentially a separate political system, but Beijing still has the final say in its internal matters. Following the clashes in 2019, the Chinese government decided to ban treason and other actions aimed at dividing the country on the territory of the island, but Washington claims that the yet to be approved law violates Beijing's promise of keeping the island autonomous. Beijing, in turn, cautioned the US against meddling in its sovereign matters and threatened an adequate response to such actions.
...
Reddit
Google+
Blogger
Pinterest
StumbleUpon
Telegram
WhatsApp
552