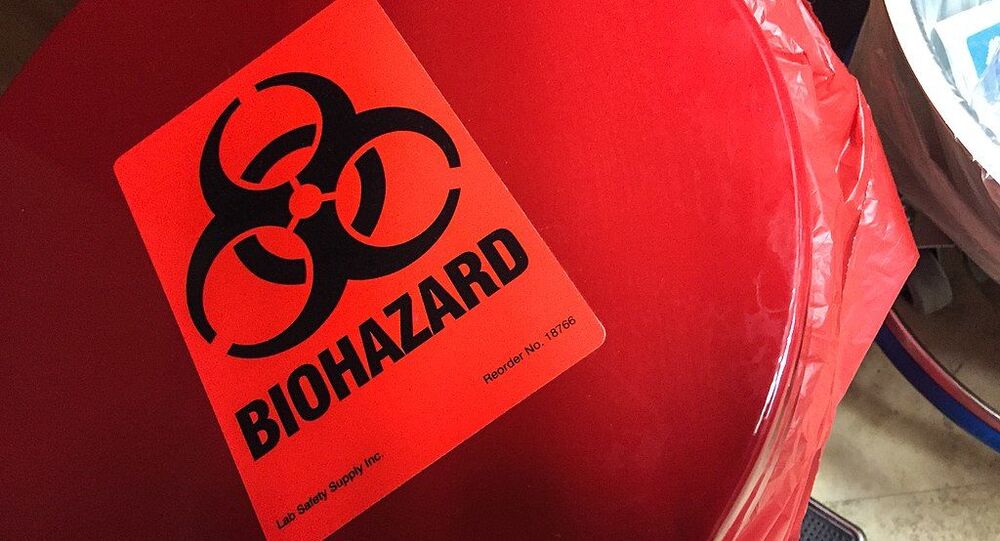 Biolabs Ringing Russia’s Borders: What’s the US Really Doing at These Facilities?

Late last month, lawmakers demanded a probe into the operations of as many as 15 US-funded biolabs in Ukraine, accusing the US of covering up details regarding the threat these facilities may pose to human safety. This week, Russia’s foreign minister charged Washington with engaging in military-related biological activities on Russia’s borders.

On Tuesday, at a meeting of the Collective Security Treaty Organization alliance, Russian Foreign Minister Sergei Lavrov accused the United States of “singlehandedly blocking” the creation of a verification mechanism for the Biological and Toxic Weapons Convention (BTWC), a landmark 1972 treaty banning the production of such weapons.

According to the foreign minister, the US continues “to carry out military-biological activities around the world, including on our borders.”

“We are conducting an intensive state-to-state dialogue with our CSTO allies on these subjects, having already signed an agreement with Tajikistan, and working with Armenia and Kazakhstan. This is a large part of the work in ensuring the fulfilment of nations’ obligations under the BTWC on the inadmissibility of reorienting any biological activity to military needs,” Lavrov stressed.

Lavrov’s comments come in the wake of confirmation Tuesday that the US Defence Threat Reduction Agency, a subsidiary of the US Department of Defence, has been working in Ukraine since 2005 on the construction or modernization of at least eight biolabs suitable for storing and working with dangerous pathogens, including those used in biological weapons.

© AFP 2021 / Paul J. Richards
Ukraine’s Opposition Accuses US of Scrubbing Info About Biolabs’ Activities on Ukrainian Territory
The report comes in the wake of a scandal in Kiev last month in which lawmakers accused the US Embassy of scrubbing information about the work of two of its biolabs from its official website. In a complaint, Opposition Platform – For Life party co-chairman Viktor Medvedchuk alleged that since these labs’ deployment, Ukraine has faced outbreaks of deadly diseases, including a 2009 outbreak of hemorrhagic pneumonia, three cholera outbreaks between 2011 and 2015, hundreds of fatalities to swine flu in 2016, and the deaths of at least 20 Ukrainian servicemen to an unknown flu-like illness the same year. “The Ukrainian people have the right to know about secret programs,” the lawmaker stated in his demands for a probe.

Ukraine isn’t the only nation where the US has established biological laboratories, with even nations with close ties to Moscow subject to US overtures. Russia has long expressed concerns about the biological safety situation in countries including Kazakhstan, Armenia and Tajikistan, all three of them allies in the CSTO.

In Kazakhstan, rumours about the safety of biolabs operating under US patronage have long plagued both local residents and authorities. For years, media in Kazakhstan have alleged that outbreaks of infectious diseases in recent years has been connected to the work of the Almaty Central Reference Laboratory, the huge biolab built with $108 million in US cash in 2016, and which specializes in the study of strains of viruses characteristic to the Central Asian Nation.

In 2018, Kazakhstan reported an outbreak in meningitis, with local media alleging that this particular strain may have been deliberately leaked from the Almaty lab to test the effectiveness of a specially-engineered strain of the disease. Kazakhstan’s Ministry of Health denied these rumours, and assured the public that there was nothing to worry about.

In March 2020, rumours again began to swirl that the spread of the coronavirus may be tied to the US-affiliated lab. Authorities vocally dismissed the claims and urged media and the public not to give in to panic.

In the Caucasus, too, the US has built new biological research institutions, or upgraded the capacities of old ones, to suit their purposes. In Soviet Days, Armenia’s Institute of Microbiology was the largest in the union. After the country’s collapse, officials in the US and the UK took an interest in its work, inviting Armenian specialists to study and teach in Western countries, and, in the 2000s, helping to open several biolabs across the country.

As was the case in Kazakhstan, funds were provided by the US Department of Defense, with $10 million contributed to the modernization of Armenia’s National Center for Disease Control and Prevention, and other labs built from the ground up in Yerevan, Gyumri, Vanadzor, Martuni and Ijevan, ostensibly to study local strains of viruses. While the centers are formally subordinated to Armenia’s ministry of health, the US Defense Threat Reduction Agency has access to them, and US nationals are known to work at the facilities.

Russia has criticized the biolabs’ secretive nature. In late 2019, to dispel concerns, Prime Minister Nikol Pashinyan agreed on a memorandum of cooperation with Moscow which would enable Russian specialists to visit the labs, but the agreement remains unsigned.

In the 2010s, the US and other Western countries allocated funding to another Russian ally in Central Asia – Tajikistan, with Foundation Merieux, a French charitable foundation whose formal mission includes the strengthening of local health capabilities and reducing the impact of infectious diseases, establishing the Gastroenterological Institute in Dushanbe in 2013 with UN and USAID assistance.

In 2019, another lab – the Republican Center for the Fight Against Tuberculosis, was opened in Tajikistan, this time sponsored directly by USAID and the Pentagon. As elsewhere, the lab allows both local biologists and their foreign counterparts to study local diseases, including tuberculosis, malaria, hepatitis and cholera. That same year, another US-funded laboratory was opened in Isfara in Tajikistan north. Little information has been made available regarding its work, except that it is also funded by the US.

The Caucasian nation of Georgia, with whom Russia has had poor relations for over a decade following the 2008 war in South Ossetia, has had one of the most active US biolab programmes in the post-Soviet space. In 2018, Igor Giorgadze, the country’s former minister of state security, asked President Trump to investigate reports that personnel from the Lugar Center biological lab outside Tbilisi had engaged in experiments on people, and that some of these test subjects had died.

In a report on the US-funded lab’s activities, Giorgadze revealed the high level of bacteriological protection at the facility, as well as equipment which he said was capable of “spraying harmful substances and ammunition with biologically active materials.” The former official questioned why a lab supposedly engaged in peaceful research would have a need for such equipment. Washington dismissed Giorgadze allegations as “absurd,” and assured that the lab’s research was peaceful in nature.

Last month, Russian Foreign Ministry spokeswoman Maria Zakharova warned that Moscow was fully appraised of US efforts to expand military research at the Lugar Lab, and said such efforts were part of a major expansion of dual purpose biological research at labs across the former USSR under the pretext of fighting bioterrorism.

The best analysis on the internet.....for the U.S Lugar Bio-Labhttps://t.co/2GTttQbfpf