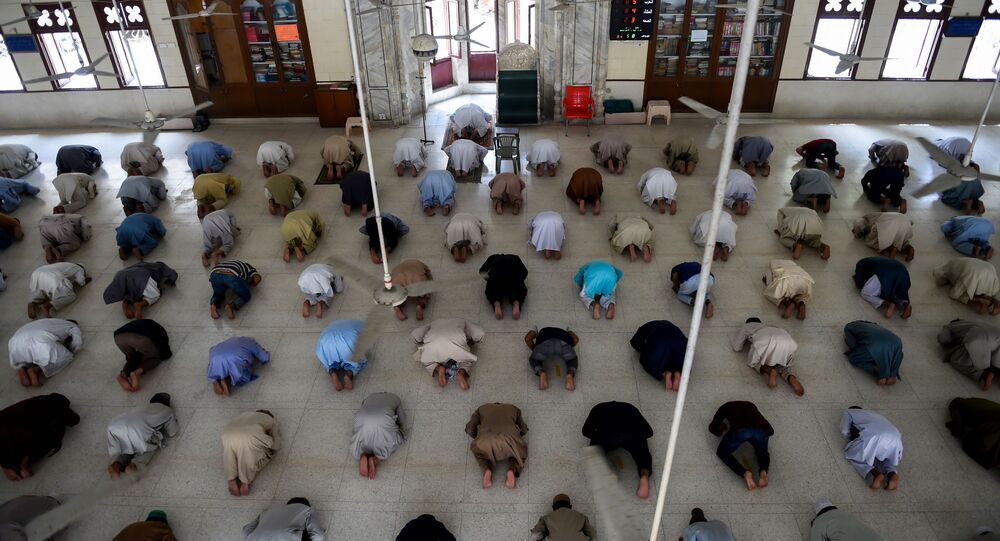 Eid al-Fitr festivities, which traditionally entail mass prayers, grand family feasts, and sprawling fairs have been expectedly overshadowed by lockdown measures, hitting people where it usually hurts most - their wallets.

As the double shock of coronavirus restrictions and dipping oil prices have plunged the world into the worst economic crunch in decades, Muslims embarked on Eid al-Fitr celebrations on Sunday, marking the end of the holy month of Ramadan. In some locations, the festival, which traditionally unites whole families, relatives from far away, friends and neighbours, are set to be spent in a comparatively frugal way, given the authorities’ still effective stay-in instructions.

After a partial easing during Ramadan led to a sharp spike in infections, some countries - from Saudi Arabia to Egypt, Turkey, and Syria - moved to ban mass prayer gatherings, a highlight of the traditionally lavish celebrations, to limit the spread of the contagious COVID-19. For instance, Saudi Arabia, home to Islam's most holy sites, kicked off a five-day, round-the-clock curfew beginning on Saturday after infections more than quadrupled since Ramadan began to around 68,000 - the biggest tally among all Gulf countries.

At this unprecedented time, Eid prayers will be held at the two holy mosques in the cities of Mecca and Medina "without worshippers", a royal decree stated. Similarly, Jerusalem’s Al-Aqsa mosque, Islam's third holiest site, will be closed over Eid, but will reopen to worshippers only after the holiday, according to the governing body. Iran, which has seen the Middle East's deadliest corona flare-ups, has called on its citizens to avoid travel over Eid as it battles to keep tabs on COVID rates.

Health Minister Saeed Namaki said that the country had doubled down on its effort to avoid "new peaks of the disease" caused by people "not respecting health regulations".

Iran shut schools and places of worship and banned local travel over the Persian New Year holidays back in March, but the restrictions were recently eased, in the run-up to Eid, celebrated by both Sunnis and Shiites.

However, a great many, out of economic or personal reasons, voiced an intention to turn a deaf ear to the authorities’ instructions, with many issuing themselves fake passes in countries from Indonesia to Pakistan, to attend the conventional Eid fairs, or at least shop for gifts for their families, irrespective of fears corona rates would further soar.

"For over two months my children were homebound", Ishrat Jahan, a mother of four, was quoted as saying by AFP, as she was seen at a bustling marketplace in Rawalpindi, Pakistan. "This feast is for the kids, and if they can't celebrate it with new garments, there is no point in us working so hard throughout the year", she added, as the country’s authorities are yet to decide on what measures to introduce throughout Eid.

Meanwhile, as many as 3,500 Tunisians who arrived back home just ahead of the holiday will have to spend it away from their families, under a two-week quarantine in airport hotels after arriving from abroad. Atef Maherzi, a doctor repatriated Tuesday from Saudi Arabia, said she would be feasting over Skype, with her husband meeting guests alone this time.

However, the dire times have inspired a group of Muslim comedians to launch a bit of visual entertainment, as mass gatherings have largely been given a no-go across nations.

Forty Muslim performers from across the world agreed to host a virtual show on Sunday called "The Socially Distant Eid Comedy Night”. Among Asian countries, Iran has been hit the most by the pandemic, with the total confirmed COVID-19 cases there topping 135,700, with India just behind (roughly 132,600), as of 24 May, per Johns Hopkins University estimates.

Eid al Fitr 2020: When and How Will the End of Ramadan Be Celebrated During Lockdown in the UK?