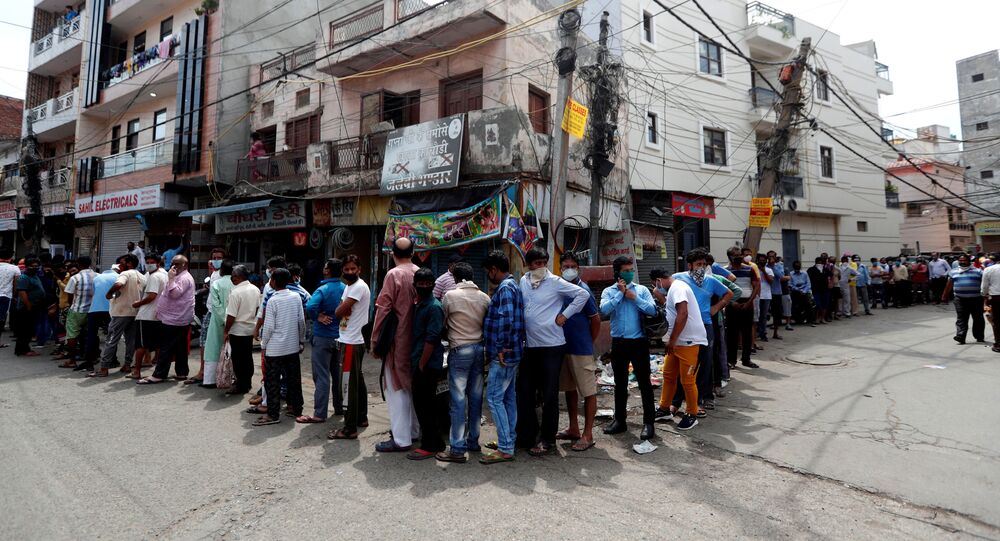 New Delhi (Sputnik): New Delhi is under sharp attack from a few sections of society for its handling of COVID-19: initially for a low testing rate in a country with over 1.3 billion and more recently for understating the number of deaths.

While countries with better health infrastructure accounted for over 90 percent of reported deaths from COVID-19 alongside a mortality rate as high as 15 percent of those infected, in contrast, the densely populated sub-Asian nation of India has a mortality rate of 3.2 percent. Experts have been attempting to explain the reason for this comparatively low rate. Some suggest demographics, varying immune systems and the pile-up of cases in big cities as the cause of the low death rate.

Various factors could be responsible for the comparatively low number of deaths in the country. India’s young population could be acting as a shield against the coronavirus, according to some, combined with a purported immunity that resists the disease, Dr. Arvind Kumar, a chest surgeon in New Delhi who previously received the highest award for medical practitioners in India, told Sputnik.

Nations with a high load of coronavirus cases, including the US, with a high fatality ratio – the percentage of deaths among confirmed COVID-19 cases – at 6 percent, while European countries accounted for an even higher death rate. The UK reported fatality rate is thought to be 14.4 percent, France at 15.2 percent and Italy 14 percent, per data presented by by the Johns Hopkins University.

"In terms of case mortality per 100000 population, India has so far about 0.2 deaths per hundred thousand population vis-a-vis approx. 4.1 deaths per 10000 population for the world as a whole," the Indian Ministry of Health and Family Welfare said on 20 May, adding, “Aggressive and early measures have shown encouraging results”.

Indian census data suggests that half of the nation's population is under 25, almost 600 million people. The country has a median age of 28 in 2019, while the US and UK stand at 38 and 40, respectively.

The fact that 80 percent of people affected by the virus India are under 60 has played in favour of the country says Kumar, citing that India’s constantly improving recovery rate is now 40 percent.

According to Health Ministry data, a small section of people, 17 percent of COVID-19 patients in the country, are above 60 and that age group accounts for 60 percent of deaths in India.

The exposure of people to harsh environmental conditions, including comprised water and air and other kinds of pollution from a young age has helped in some way to gain additional immunity against infection, claims Kumar.

“The extreme environmental factors have remained an integral part of the Indian population, therefore, the body becomes immune to regular infections as our immune system automatically starts building the antibodies to act against the enemy,” said Kumar, also the chairman of Center of Chest Surgery.

Indians have natural immunity, compared to those from western countries, which could play a role against the coronavirus, offers the doctor, adding that these assertions are mere conjecture and suggesting that several societal elements are simultaneously contributing in small proportions.

“The health facilities in India are still not flooded the way it happened in Europe and USA, they were caught off guard and soon their ICU were overwhelmed with patients. Whereas India used the lockdown period aggressively, we have made preparations so that even if now the cases are increasing, the health facilities are here to take care,” said Kumar.

He added that there were instances when ventilators were not available to patients in France. “Fortunately that situation has not arisen in India, and it's unlikely to arise with the present state of preparedness,” he added.

Accumulation of Cases in Metro Cities

The more vulnerable Indian states, with more fragile healthcare systems, are still not bearing the brunt of the coronavirus cases in the country, as most cases have been recorded in states like Maharashtra, Tamil Nadu, Delhi and Gujarat, said the doctor.

“The good thing is that 50 percent of our cases are actually confined to three states: Maharashtra, Gujarat and Tamil Nadu. They constitute nearly 50 percent of the volume of the cases. And the most vulnerable states like Bihar, Jharkhand and Chhattisgarh still have the least amount of cases,” added Kumar.

These dynamics can quickly change due to reverse migration, warns the doctor. The more people who become unemployed and are forced to return to their hometowns and taking less protective measures, the more cases could arise in India’s more remote locations.

Kumar suggested that infections in India could increase to 4,000,000-5,00,000 with relaxed social norms in several states by the time the country hits the peak in June-July. "It's only by July end that India will see a decline in number of infections, till then a temporary spurt is expected," he offered.