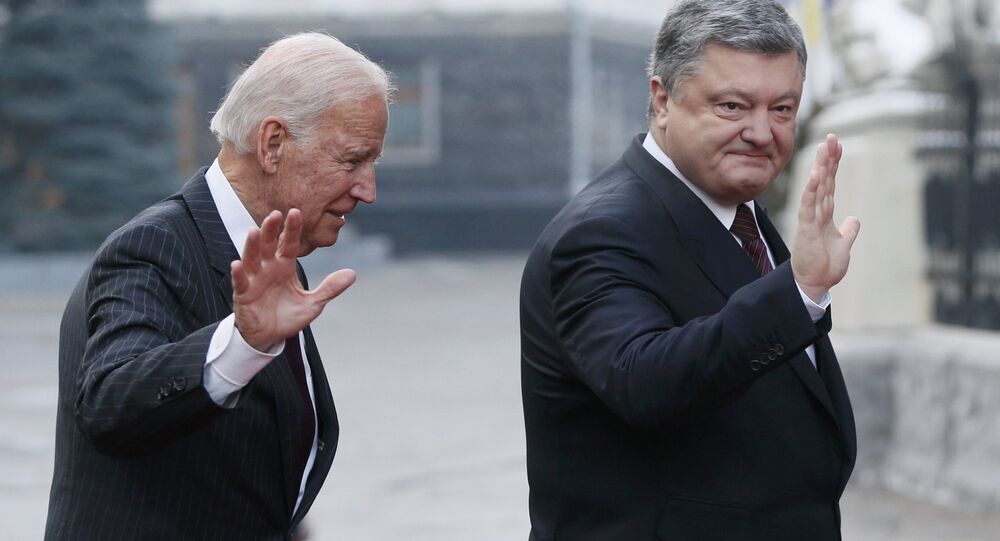 The probe into the Biden family’s alleged unlawful activities in Ukraine gained fresh impetus Tuesday after a Ukrainian lawmaker released recordings of conversations between Ukrainian ex-President Petro Poroshenko and former Vice President Joe Biden, revealing the extent to which Biden wanted to get a prosecutor investigating his family fired.

The bombshell Poroshenko-Biden tapes released this week were likely recorded by the former Ukrainian president himself for his personal own ends, and leaked by members of his security staff, possibly for monetary gain, a source inside the Security Service of Ukraine (SBU) has told Ukrainian media.

“A certain circle of people probably had access to these recordings and the servers on which they were held. For example, the president’s former bodyguards. They may have leaked the recordings without the president’s knowledge,” the unnamed SBU official said.

“I wouldn’t rule out the element of corruption. If more records of other conversations between Poroshenko and some other persons appear soon, this means someone may have just sold the library of his conversations,” the official added.

The SBU officer’s comments come after Poroshenko himself blamed the “Kremlin’s fifth column” in Ukraine for leaking the “fabricated” audio recordings. Poroshenko called lawmaker Andriy Derkach, who released the tapes on Tuesday, a “graduate of the Higher School of the KGB in Moscow,” and  demanded that the SBU investigate the matter more thoroughly.

President Volodymyr Zelensky commented on the recordings on Wednesday, saying he expected more revelations to come out about Poroshenko’s presidency in the future, and that Poroshenko’s administration “ruled the country in such a way that they still have many adventures and [criminal] sentences to face.”

According to Zelensky, the audio recordings contain information which could “qualify as high treason,” but stressed that it will be up to Ukraine’s law enforcement authorities to make that determination.

The series of recordings released by Derkach on Tuesday purportedly feature conversations between Poroshenko and senior Obama administration officials including Vice President Joe Biden and Obama Secretary of State John Kerry between late 2015 and mid-2016.

The conversations center around Viktor Shokin, a Ukrainian prosecutor general who at the time was investigating Burisma, a Ukrainian energy company that hired Vice President Biden’s son Hunter to its board of directors in April 2014. In the tapes, Kerry and Biden can be heard telling Poroshenko that Kiev would not get a $1 billion loan guarantee from Washington unless Shokin was sacked. In one conversation dated May 13, 2016, a voice purported to be Biden’s tells Poroshenko: “I’m a man of my word. And now that the new prosecutor general is in place, we’re ready to move forward to signing that billion dollar loan guarantee.”

The Biden campaign did not deny that the voice in the recordings was that of the former vice president, but claimed that the tapes were “heavily edited,” and called them “a nothingburger that landed with a thud.”

Senate Republicans may beg to differ. The Senate Homeland Security and Government Affairs Committee is already carrying out a probe into Hunter Biden's work with Burisma in Ukraine, and on Wednesday authorized its first subpoena of Biden and Clinton-affiliated consulting company Blue Star Strategies.

The Biden family’s activities in Ukraine became the subject of a national scandal last year, after House Democrats accused Donald Trump of threatening to withhold hundreds of millions of dollars in military aid to Ukraine unless President Zelensky restarted the Biden investigation. Trump denied any wrongdoing, and was cleared following an impeachment trial in the Senate earlier this year. The Bidens similarly deny any wrongdoing, and say there’s no evidence at all to suggest that Biden Jr.’s $50,000-a-month no-show job at Burisma was a payoff by the company in exchange for access to the Obama White House, as alleged by some Republicans.