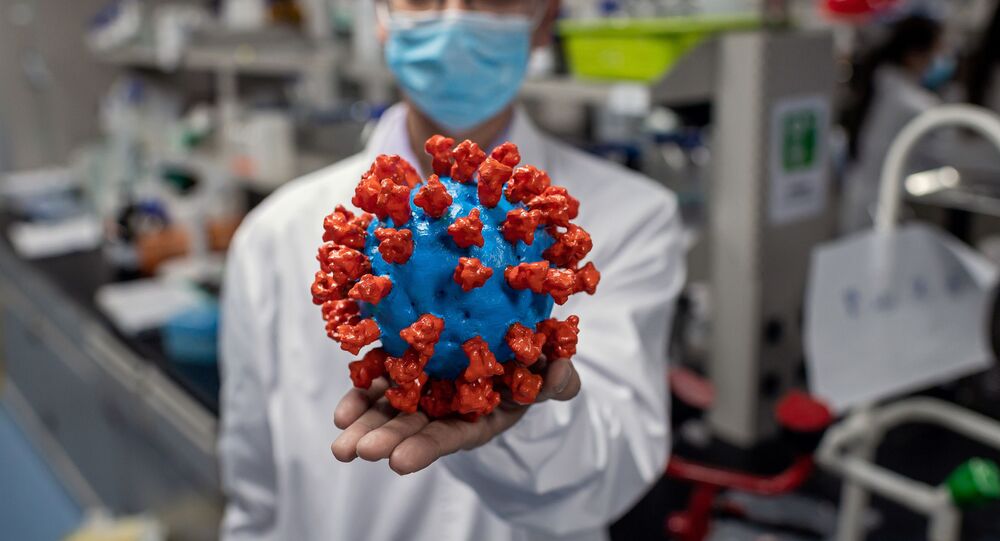 The COVID-19 outbreak first emerged in China’s Hubei province in late 2019, before spreading across the world to become a pandemic and triggering an international race against time to develop treatments and vaccines.

A drug currently undergoing testing at a Chinese laboratory has been touted by a group of scientists as potentially able to end the COVID-19 outbreak, which first emerged in China’s Wuhan late last year before evolving into a global pandemic, reported AFP.

In research, published Sunday in the scientific journal Cell, the scientists reportedly claim the medication developed at China's Peking University could produce a two-pronged effect, both shortening recovery time for people infected with the respiratory disease, and providing short-term immunity from the virus.

The drug has been successful at the animal testing stage, Sunney Xie, director of the university's Beijing Advanced Innovation Center for Genomics, was cited by the outlet as confirming.

"When we injected neutralising antibodies into infected mice, after five days the viral load was reduced by a factor of 2,500. That means this potential drug has (a) therapeutic effect," said Xie.

In their work, Xie's team had isolated 14 neutralising antibodies from the blood of 60 recovered patients.

These antibodies are typically produced by the human immune system as a barrier to stop the virus from infecting a person, and their use, claim the team, offers a potential "cure" for the disease.

In another boon, the new drug could offer short-term protection against the coronavirus, as the research showed mice resisted infection if the neutralising antibody was injected.

While current trials showed the period of protection for medical workers could potentially last a few weeks, Xie voiced hope further studies could extend that to several months.

© REUTERS / Carl Recine
Scientists are seen working at Cobra Biologics, they are working on a potential vaccine for COVID-19, following the outbreak of the coronavirus disease (COVID-19), in Keele, Britain, April 30, 2020

Neutralised antibodies have the potential of forming the basis for a specialised drug to stamp out the coronavirus pandemic," said the scientist.

Drugs based on the use of antibodies have previously been successful in treating viruses such as HIV, Ebola and Middle East Respiratory Syndrome (MERS).

As the world has been sparing neither time nor money in the global effort to develop a vaccine or effective treatment for the COVID-19 virus, Xie was cited as saying his team had been working "day and night" seeking a breakthrough.

Sunney Xie added that the drug might be ready later in the year, in time for any possible second wave of the virus, while the process of developing a vaccine development is more demanding.

The scientist revealed that planning for a clinical trial already underway and most likely to be carried out in Australia and elsewhere.

"We would be able to stop the pandemic with an effective drug, even without a vaccine," said Xie.

Touching upon the potential benefits of using plasma from recovered individuals to boost the body's defences against the virus, Xie said that over 700 patients had received this therapy in China, showing "very good therapeutic effects".

"However, it (plasma) is limited in supply," said Xie.

The news comes as China’s health officials announced last week the country has five potential coronavirus vaccines at the human trial stage, with no “major adverse reactions” reported among the 2,575 volunteers participating in the phase-two tests.

Zeng Yixin, deputy director of the National Health Commission, was cited by The Japan Times as saying:

“According to the plan, if all goes well, the above projects will complete the second phase of clinical trials in July this year.”

More than 100 vaccines for COVID-19 are in the works globally, with several companies and organizations in the US and around the world testing potential vaccines in humans, including Pfizer and its German partner BioNTech, and the University of Oxford in cooperation with AstraZeneca.