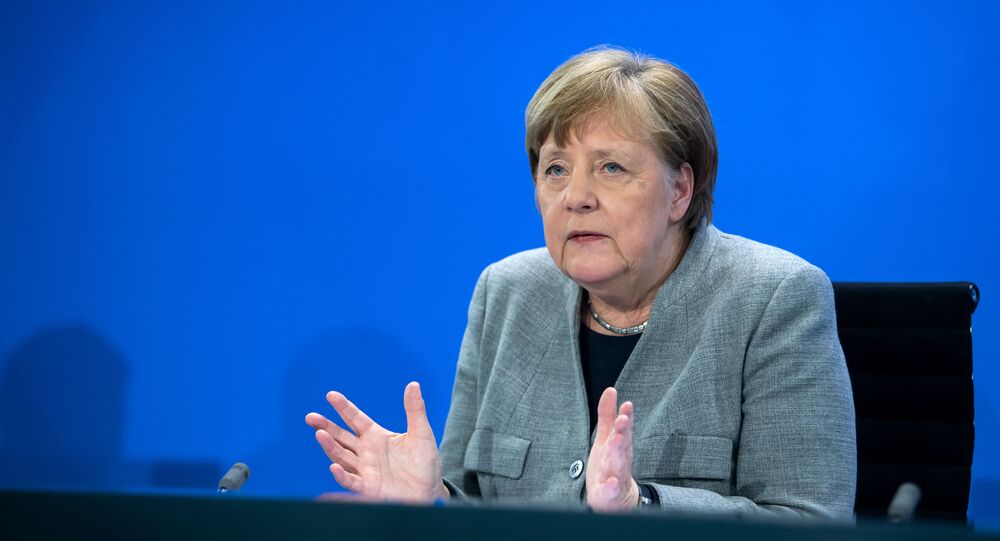 Prior to the COVID-19 pandemic, a crucial EU-China summit slated for September in Leipzig had been touted as an opportunity for the sides to stake a stride towards an enhanced economic and strategic relationship, yet the global health crisis and accusations leveled at Beijing over its handling of the epidemic might thwart these hopes.

The ambitious program that German Chancellor Angela Merkel outlined for a crucial meeting between 27 EU leaders and China’s President Xi Jinping slated for 14 September in Leipzig is in doubt, writes DW citing a report in Süddeutsche Zeitung daily on Monday.

The outlet cites official Berlin's response to a question from the opposition Green Party regarding what role the human rights issue would play in Leipzig as revealing that the current government is "significantly more reticent" in broaching China's rights record.

In its reply, the German government told Greens parliamentarian Margarete Bause that the Leipzig summit would be an "event of the EU under the presidency of the European Council of Ministers," despite conceding that it had observed with "concern" a "weakening of international human rights standards" in China.

Bause was cited by the outlet as accusing Germany, which assumes the EU's rotating presidency from July, of pretending to be seated at a "side table in Brussels," while in actual fact it ought to be using its clout within the 27-member bloc to broach China's "systematic human rights abuses, repression, total surveillance and censorship."

© AP Photo / Michael Sohn
In this Friday, Feb. 2, 2018 photo a cameraman films a meeting of the German Federal Parliament, Bundestag, at the Reichstag building in Berlin, Germany.

Opposition Free Democrat Gyde Jensen, chairman of the Bundestag's human rights committee, was cited as urging Chancellor Angela Merkel to bring home to Chinese leader Xi Jinping that "for the EU human rights are not negotiable," adding that questioning Beijing’s handling of the current coronavirus pandemic should also be at the top of the German leader’s agenda.

The Leipzig summit had been hailed by Angela Merkel, chairing the EU Council presidency for the final time in her chancellorship, as a "first-ever" between China and Europe, set to bring the sides on the same page on such issues as climate change, trade and multilateralism.

However, as the coronavirus pandemic brought the world to a standstill, and escalating bellicose rhetoric between the US and China led to concerns being voiced over Beijing’s handling of the health crisis and alleged lack of transparency around it, high hopes for the summit have been put on a back burner, according to a Brussels source cited by SZ.

Earlier in April Nicolai von Ondarza, senior researcher at the German Institute for International and Security Affairs (SWP), had forecast that "many" topics such as a "green deal" on climate protection and digitalization would be "pushed back into the year 2021."

A member of the German Green Party, Reinhard Butikofer, the head of the European Parliament's 37-member panel for relations with China, was quoted as dashing hopes for any breakthrough in September:

"Merkel will not be able to present many results" in Leipzig, he said.

On the issue of climate protection, Butikofer suggests that very little progress is evident, as the UN-summit in Glasgow set for November had to be been postponed.

Xi Jinping, President of China and leader of the ruling Communist Party, is not prepared to make "relevant concessions" on market access, says Butikofer, a central part of the investment protection agreement hoped to be reached in September.

As for the pandemic-driven escalating the verbal spat between the US and China, the veteran member of the Greens says:

"Beijing cannot give Brussels anything that Washington would not immediately demand for itself.”

Angela Merkel had raised too high expectations for the Leipzig summit, said Noah Barkin of the German Marshall Fund, when she set out two goals for the summit: the investment protection agreement with Beijing, vital for Europe's economy, and hopes for progress in climate protection.

"Especially in these difficult times, we need to strengthen international cooperation - also with challenging partners like China."

He added that during the Leipzig summit Germany needs to urge increased transparently on the part of China regarding the source of the COVID-19 epidemic in Wuhan.

Amidst a degree of mistrust towards China taking hold across Brussels, the EU's Commissioner for Foreign Affairs, Josep Borrell, said in an interview with France's Le Journal du Dimanche that Europe had been "naïve" in its dealings with China.

The diplomat acknowledged that China has a "different understanding of the international order."

Nonetheless, an EU diplomat was quoted last week by CNN as saying:

"It will make us rethink, but at the same time we cannot walk away from China… All of our economies rely on supply chains that run back to Wuhan and beyond. We've always said no one's interests are going to be served from not trading with them. So that problem will always be there."