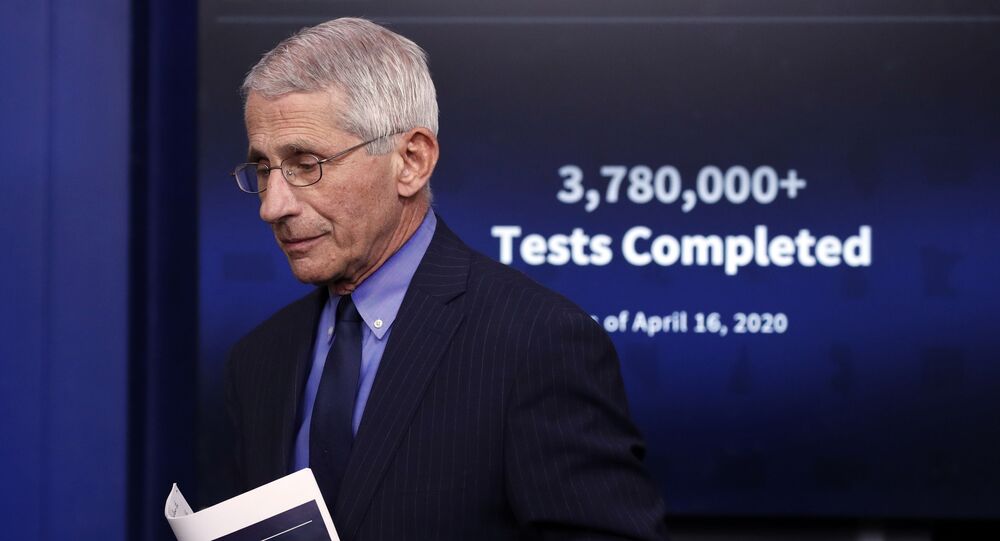 Despite preliminary conclusions from the US National Intelligence director’s office that the coronavirus was not “genetically modified” in a Wuhan laboratory, President Donald Trump continues to maintain that the infection was manmade - in stark contrast to the opinions of some White House officials.

Anthony Fauci, the director of the US National Institute of Allergy and Infectious Diseases and a member of the White House Coronavirus Task Force, slammed speculation about the lab origins of SAR-CoV-2, insisting that the virus emerged naturally, according to an interview with National Geographic published on Monday.

“If you look at the evolution of the virus in bats, and what's out there now is very, very strongly leaning toward this [virus] could not have been artificially or deliberately manipulated - the way the mutations have naturally evolved”, Fauci argued. “A number of very qualified evolutionary biologists have said that everything about the stepwise evolution over time strongly indicates that it evolved in nature and then jumped species.”

During the interview, Fauci was asked whether it was possible that the virus emerged in nature, but then was brought to the laboratory in Wuhan, where it escaped. The prominent health official maintained, however, the futility of these claims, describing them as a “circular argument”.

The immunologist argued that it was possible that coronavirus will not completely disappear from our lives, risking a new wave of infections after the summer.

“It's going to be around, and if given the opportunity, it will resurge”, Fauci claimed, signaling the need for the American health care system to “adequately” prepare for a potential new outbreak.

On Sunday, US Secretary of State Mike Pompeo said that there was “enormous” evidence that the coronavirus originated from a Chinese laboratory, echoing the statement of President Donald Trump who argued during a Thursday briefing that the infection should be linked to the Wuhan Institute of Virology.

These claims run contrary to the earlier report from the office of the Acting Director of National Intelligence Richard Grenell which agreed with “the wide scientific consensus that the COVID-19 virus was not manmade or genetically modified”, something which has been supported by British and Australian intelligence.

The Trump administration's claims have placed a significant strain on Washington-Beijing relations, with Chinese authorities accusing the US of “telling lies” about the pandemic to divert attention from criticisms about the country’s poor handling of the coronavirus outbreak.

© REUTERS / JONATHAN ERNST
White House Odd Couple: Trump, Pence Reportedly Form Close Bond Amid Coronavirus Pandemic
On Tuesday, Donald Trump promised that the US will come up with a report on the origins of COVID-19 “over a period of time”. He also said that Dr. Fauci will testify before a Senate panel. This comes after reports that the health expert was “blocked” by the White House from testifying before Congress as a witness in relation to the Trump’s administration response to the COVID-19 pandemic.
...
Reddit
Google+
Blogger
Pinterest
StumbleUpon
Telegram
WhatsApp
183
Tags:
Richard Grenell, National Intelligence Office, Anthony Fauci, coronavirus, COVID-19, Australia, Great Britain, China, US
Community standardsDiscussion