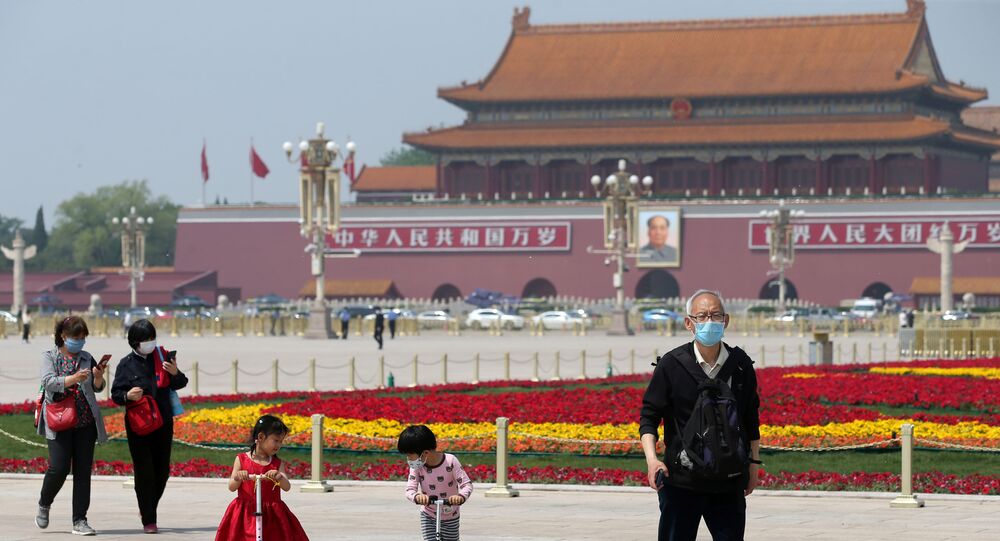 The US has been criticizing China’s response to the COVID-19 outbreak, first identified in Wuhan, Hubei in December 2019, as slow and inadequate in its early stages, with Donald Trump subsequently stating he's seen evidence suggesting the coronavirus originated in a lab in Wuhan.

A United States Department of Homeland Security (DHS) report, dated 1 May, says Beijing "intentionally concealed the severity" of COVID-19 in early January to allow for time to organise sufficient shipments of medical supplies to deal with the epidemic, reports The Associated Press.

According to the four-page intelligence report, marked "for official use only" but not classified, during a period in January when China was allegedly downplaying the many dangers of the novel respiratory disease, the country had dramatically increased imports and decreased exports of medical supplies, including face masks, gloves and surgical gowns.

The analysis claims China sought to cover up its manoeuvres by “denying there were export restrictions and obfuscating and delaying provision of its trade data”.

The same report suggests that throughout January, Beijing procrastinated in warning the World Health Organisation that COVID-19 “was a contagion” as it hiked up medical supply orders from abroad.

The document, according to The Associated Press, claims its conclusions are based on the finding, arrived at with 95 percent probability, that China’s import and export changes during the stated period were not within the normal range.

China imported 2.5 billion items of personal protective equipment (PPE), including over two billion masks, during the six weeks starting mid-January, according to Chinese government data cited by Newsweek, with the countries that shipped the supplies subsequently hard pressed to assemble enough PPE for their own fight against the disease.

There has been no comment on the report from China's embassy in Washington D.C.

China informed the WHO of the coronavirus outbreak on 31 December 2019, publicly identifying the coronavirus pathogen on 8 January.
Amidst the pandemic, there have been reports that Chinese officials had stopped doctors from warning about the dangers of the novel virus early on.

However, it has also been suggested that many actions of the Chinese government were the result of bureaucratic issues and a hesitancy to disclose bad news, with no public evidence to substantiate an intentional covert plot by Beijing to stock up on global medical supplies.

The new developments feed into previous rhetoric on the part of Washington that has been ramping up its criticism of China. On Sunday, US Secretary of State Mike Pompeo spoke on ABC’s “This Week,” emphasising that he had no reason to believe the virus was deliberately spread.

“Remember, China has a history of infecting the world, and they have a history of running substandard laboratories… These are not the first times that we’ve had a world exposed to viruses as a result of failures in a Chinese lab… And so, while the intelligence community continues to do its work, they should continue to do that, and verify so that we are certain, I can tell you that there is a significant amount of evidence that this came from that laboratory in Wuhan.”

In a tweet on 3 May Donald Trump, who has been fending off criticism of his handling of the coronavirus epidemic and not acting on early warnings from US intelligence about the potential dangers of an outbreak, seemed to lay the blame with the aforementioned officials for not making clearer how dangerous a potential coronavirus outbreak could be.

Intelligence has just reported to me that I was correct, and that they did NOT bring up the CoronaVirus subject matter until late into January, just prior to my banning China from the U.S. Also, they only spoke of the Virus in a very non-threatening, or matter of fact, manner...

​Earlier, Trump had speculated that the virus might have escaped from a Chinese lab as a result of a “mistake,” with intelligence agencies reportedly still looking into the theory.

According to experts, the novel coronavirus is not human-engineered, and naturally occurs in bats.

While virologists are still studying how the virus jumped from animals to humans, they believe the chance that the pandemic was triggered by an accident at a laboratory as negligible.

China has been emphatically rejecting all accusations leveled at it.

“The US government has ignored the facts, diverted public attention and engaged in buck-passing in an attempt to shirk its responsibility for incompetence in the fight against the epidemic,” said Chinese Ministry of Foreign Affairs spokesman Geng Shuang on Friday.