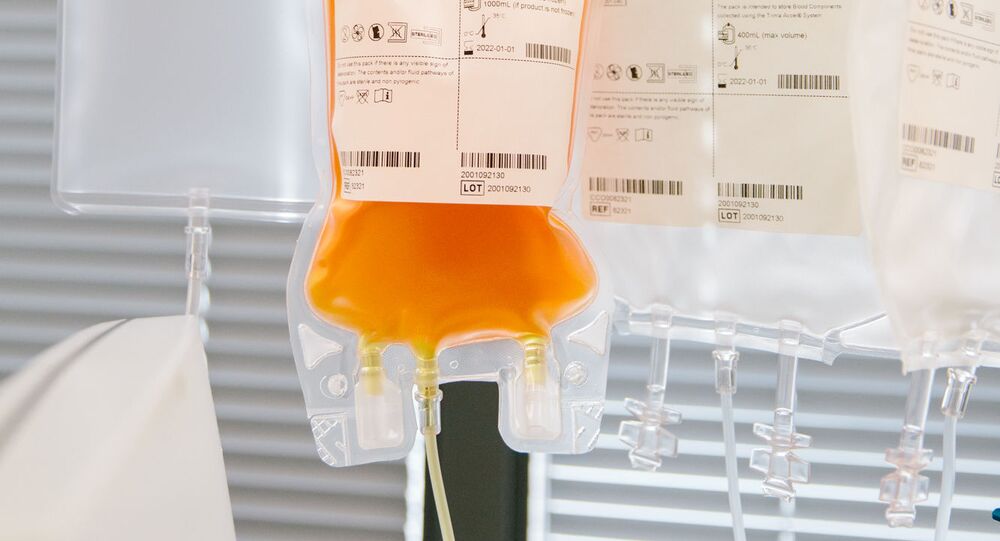 New Delhi (Sputnik): Doctors around the world have brought up plasma therapy as a potential cure for the coronavirus and countries like the UK, US, and Turkey have already begun clinical trials, while the World Health Organisation (WHO) has called it a "very valid" approach to test it against COVID-19.

Dr Sandeep Budhiraja, who successfully treated a coronavirus patient in a critical state with plasma therapy, told Sputnik that it has opened a way of treatment during this challenging time. The doctor said that the therapy is a safe procedure with minimal side-effects that are not life-threatening.

“It is a very safe procedure. Very occasionally, reaction to plasma can happen but these are generally mild reactions and not life-threatening”, Dr Budhiraja at Delhi’s premier Max Super Speciality Hospital, Saket, told Sputnik.

The claim is in sharp contrast to the statement made by India’s Ministry of Health and Family Welfare, which disapproved plasma therapy as a treatment for COVID-19, saying that it remains in the experimental stage and could cause life-threatening complications.

The therapy is conducted by harnessing the blood from patients who have recovered from COVID-19 and using the antibodies from the plasma to infuse them into an ill patient. The antibodies can rapidly detect and destroy the virus.

© CC0
Microsoft Launching 'Plasmabot' to Encourage People Recovered From COVID-19 to Donate Their Plasma
India’s apex medical hospital, the All India Institute of Medical Sciences (AIIMS), has also started clinical trials of the convalescent plasma therapy in the treatment of COVID-19 before the mode of therapy can be recommended for routine use in coronavirus patients.

Dr Budhiraja said that before approving or disapproving the therapy as a treatment, the government must wait for the results of more trials undertaken by hospitals, as they will reflect the results of a greater sample size.

“As ICMR and DCGI have approved plasma treatment trials for moderately severe cases of COVID-19, more hospitals will be able to carry out this trial and enroll patients. Also, as awareness increases, recovered patients will come forward to donate plasma voluntarily. The results of large trials will then be able to conclusively decide its effectiveness”.

Good Alternative Amid Scarcity of Ventilators?

According to the World Health Organisation (WHO), some five percent of severe cases of COVID-19 require the external support of ventilators, the last resort to save the lives of patients.

© CC0
Initial Plasma Therapy Trials Give Hope: Delhi Gov’t Reveals Result of Its Use on COVID-19 Patients
While an estimated figure shows that India has no more than 20,000 ventilators to fight the pandemic, the country is racing to secure enough ventilators to sustain the outbreak, with around 50,000 procurement orders from domestic manufacturers and China.

Plasma therapy, however, has turned out as a silver lining for India in such a scenario, as it can be effectively used on patients with moderate to severe illness and those who have had a history of chest disease where the lungs are already compromised.

“Medically, I would say people who have pneumonia with Type I respiratory failure and acute respiratory distress syndrome are the category of patients for this treatment along with moderate to severely ill patients near death”, Dr Budhiraja said, stating that it is only a treatment until a definitive therapy or vaccine becomes available.

However, plasma therapy and the treatment is futile in patients with very a critical illness including multi-organ failure or with a mild illness.

Risk to Immunity of Donor or Patient

After the Delhi government obtained approval from the country’s drug regulator, the Drug Controller General of India, for a “limited trial” of plasma therapy, state chief Arvind Kejriwal urged recovered patients to donate their plasma to help those who are critically ill.

While hundreds have queued up to donate their plasma, several have shown inhibition, fearing that it could harm the immunity of the recovered person.

Bursting the myths over the apprehensions, the doctor stated: “It is a very safe procedure done with adequate precaution. Donors are healthy when plasma is taken and their blood is screened to rule out HIV, Hepatitis B and Hepatitis C infections. It takes 30-60 minutes to carry out the procedure called plasma therapy by connecting the patient’s veins to the machine. No known side-effects are there on the donors' immunity or overall health”.

The doctor also categorically denied the chances of treatment going wrong on the patient.

A 49-year-old patient, whose father had already passed due to COVID-19, developed respiratory failure during his treatment at the Max Super Speciality Hospital, Saket, and required immediate ventilator support. As his condition deteriorated, the family urged the hospital to try convalescent plasma therapy on compassionate grounds as it is still an experimental technique.

“We are delighted that the therapy worked well in his case, opening a new treatment opportunity during these challenging times. But it is important that we also understand that Plasma Therapy is no magic bullet”, said Dr Budhiraja.

“During the patient’s treatment at Max Hospital, Saket, other standard treatment protocols were followed, and we can say that Plasma Therapy could have worked as a catalyst in speeding up his recovery. We cannot attribute 100% recovery to plasma therapy only, as there are multiple factors which carved his path to recovery”, he added.

© CC0
US Coronavirus Patients Receiving Treatment Via Experimental Plasma Therapy
China's National Health Commission has stated that transfusing plasma is an unconventional therapy used to treat severe or critical cases of COVID-19 at a time when vaccines and specific medications are not yet available. It claimed that the condition of patients' had improved within 24 hours after receiving the treatment, with better oxygen levels and reduced inflammation.

The WHO's top emergency expert also called it a "valid approach" to test an important area to pursue, but that it should be administered at the right time to give the vital push to a patient's immune system.