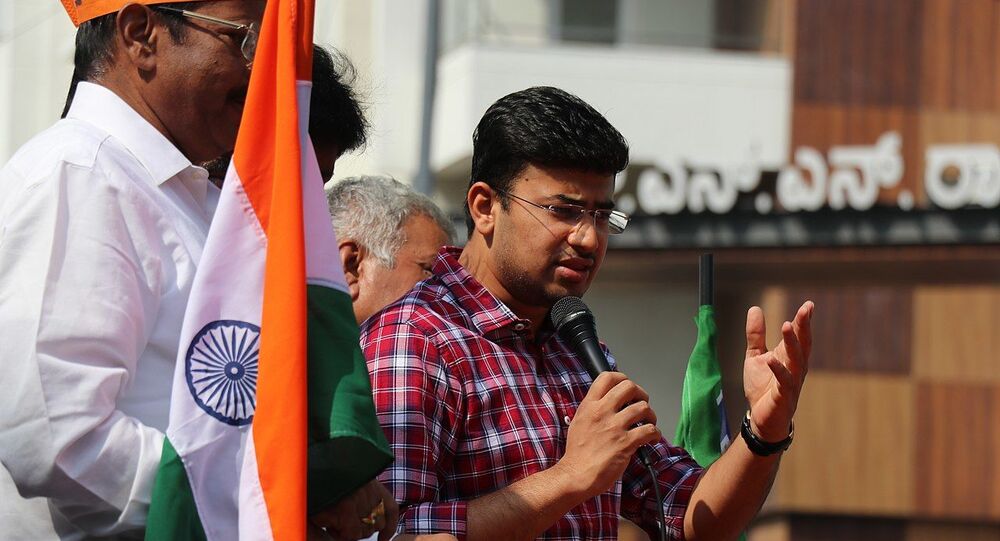 New Delhi (Sputnik): Young politician Tejasvi Surya, handpicked by Prime Minister Narendra Modi to contest in the parliamentary polls, is no stranger to controversies. After getting trolled for his "95% Arab women never had orgasm" post, the lawmaker has now set Twitter abuzz with a new picture in which he can be seen sporting a saffron mask.

While clinical masks that are widely being used amid the coronavirus pandemic are largely a subtle blue and white colour, lawmaker Tejasvi Surya from the federally governing Bharatiya Janata Party (BJP) has shared a photograph of himself wearing a saffron mask.

Surya has claimed to have donated 200,000 saffron masks in his constituency Bengaluru South in Karnataka state.

Associated with Hinduism-inclined political and religious groups, the saffron colour is also associated with the  Bharatiya Janata Party's flag. The politician is now being blamed for politicising the coronavirus pandemic and “stooping low in times of adversity”, while one user even suggested that the mask has an "inbuilt gaumutra (cow urine) sprinkler" in it:

You want to make it a BJP mask?

It should be the light green or grey white used by Doctors/nurses.

What a tragedy for Indian politics?

This is one of the lowest symbolic pont that I observed in the last 4 decades!

You will be able to distribute it to your cadres only!

Don't stoop to this low brothers...Atleast during the time of such adversity let us be united with no hate for one another...Let's survive..

Don't misuse the colour for your political mileage. Yes, there are Hindus who don't stand with your version and exhibition of ideas. The colour isn't something to be used anywhere, it holds utmost importance for me and many other people, who don't use it for such tactics.

Others hailed him for him the subtle jibe and initiative.

We are distributing 2 lakh such masks in Bengaluru South.

Liberals on the way to file case on Wearing bhagwa mask😂

Tejasvi this is great no doubt. As a young one many iniatives for Bangalore required right from better roads, better infra and many such issues. Please have a road trip to most parts of the City to understand. All stalled projects can move quickly now atleast..

​The 29-year-old Karnataka lawmaker fell victim to trolls on Twitter after a controversial old tweet – "95% Arab women never had orgasm" – resurfaced and started making the rounds on the microblogging website.