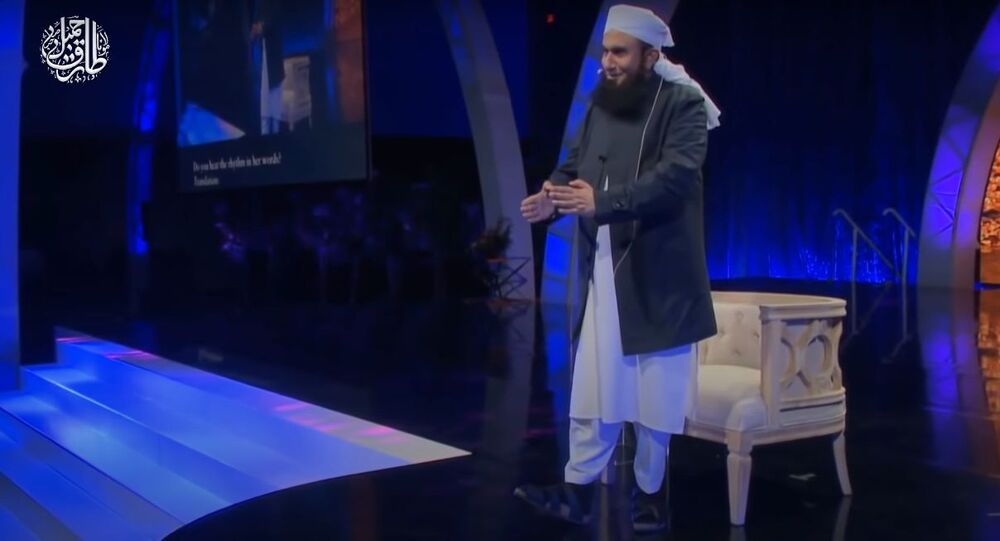 New Delhi (Sputnik): While becoming a religious preacher might not be considered a viable career option for many aspiring youngsters, the fame of Pakistan’s Tariq Jamil can be judged with the hashtags trending in support of the Islamic preacher after he was widely criticised for his comments linking women with the coronavirus.

Famous Islamic cleric Tariq Jamil of Pakistan, who has a fan following of more than 84,000 on Twitter, has apologised and clarified remarks he made a few days ago.

On 23 April, Jamil set social media on fire saying on a Pakistani television show that "wrongdoing of women" is the reason Allah has punished the nation with coronavirus.  Prime Minister Imran Khan also appeared on the show.

The preacher and senior member of the Tablighi Jamaat - Islamic missionary movement - apologised in a series of Twitter posts to those who may have been inadvertently hurt, and said that it was a general remark, which did not target "any specific men, women, persons or gender".

“My goal was to remind us all to focus on the spiritual and away from our desires and the materialistic. I am the first to admit as I have taught over the years, that there is no excuse for making any hurtful comments about anyone or making anyone feel uncomfortable,” he said on Tuesday.

Recently I made some comments that I wish to clarify
My aim was to point out that WE are all to blame for our current state. It was meant to be a general remark not targeting any specific men, women, persons or gender, but as a reminder to get closer to what Allah teaches us.

For which I sincerely apologize to anyone who may been inadvertently hurt.
I pray that Allah accept our good deeds and forgive our shortcomings.#tariqjamil

The tweets led to a flurry of comments, which mostly showed “respect” and supported him.

Jamil’s statement has evoked widespread condemnation from many people, including Pakistani journalists. Not only had he held “immodest women” responsible for coronavirus but he also questioned journalists and members of the civil society, calling media outlets around the world “liars” and saying that organisations “needed to be more truthful”, reported Dawn news.

“When a Muslim’s daughter practices immodesty and the youth indulges in immorality, then Allah’s torment is unto such a nation,” Jamil said on 23 April.

First, we're not your daughters

Second, didn't you just describe IN DETAIL the bodies of hoors during a sermon?

One Killed, Another Injured as India, Pakistan Engage in Massive Firefight at Border