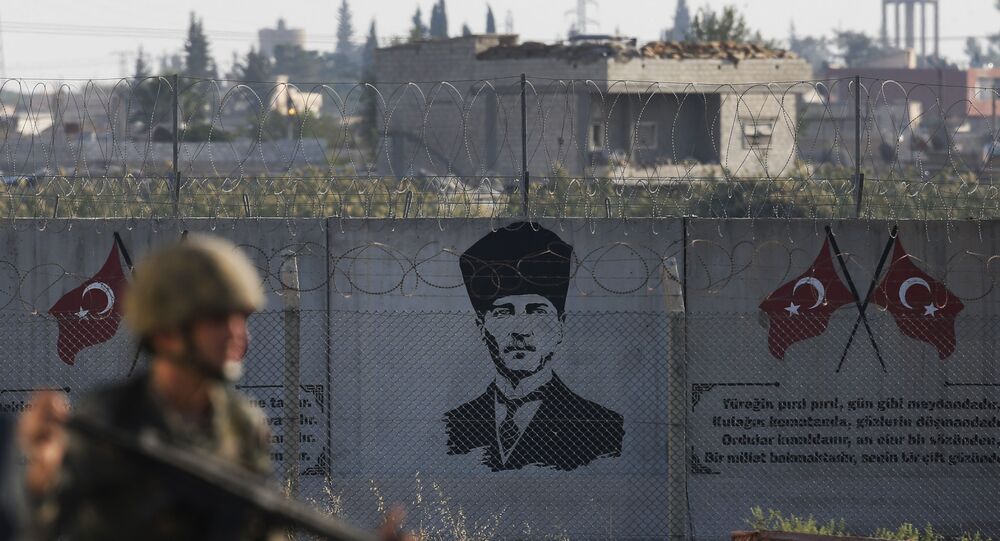 April 23 is National Sovereignty and Children's Day in Turkey and this year is a special occasion - the 100th anniversary of the foundation of the modern Turkish state. Sputnik looks at the events of 1920 and how Kemal Ataturk created a nation out of the ashes of the Ottoman Empire.

On 23 April 1920 the Turkish Grand National Assembly was inaugurated in Ankara and Mustafa Kemal, a senior army officer and hero of the Battle of Gallipoli, said: "There will not be any power above the assembly."

Kemal, who would later found the Republic of Turkey and be given the name Ataturk (Father of the Turks), wanted to modernise the country and shake off all the antiquated rituals which he felt had led to the Ottoman Empire being on the losing side in the First World War.

He gave us our independence, always stood upright against problems. He is Mustafa Kemal Atatürk, he is our leader...

​Mehmed VI, who would be the last Sultan of the Ottoman Empire, had lambasted Mustafa Kemal and his supporters as "rebels” and “Bolsheviks" and had got a loyal imam to issue a fatwa against them.

But on 24 April 1920 Ataturk - who would become Turkey's first President in 1923 - made a speech in which he said: "We, your deputies, swear in the name of God and the Prophet that the claim that we are rebels against the sultan and the caliph is a lie."

The Rise and Fall of the Ottoman Empire

The Ottoman Empire was created in 1453 when it took Constantinople and over the next 200 years it conquered a vast swathe of south-eastern Europe, North Africa and the Middle East, but failed to take Vienna in 1683 and by the start of the 19th century had began a long and very slow decline.

​By the 1860s the Ottoman Empire had been dubbed the "sick man of Europe" in the British press and by the time the First World War broke out it had lost most of its territory in Europe but held on to vast swathes of the Middle East.

The Ottoman Empire sided with Germany in the First World War and when Sultan Mehmed V died in July 1918 his son Sultan, Mehmed VI, inherited the throne only to find himself on the losing side when the Armistice was signed in November.

📷 Photos from late-Ottoman Palestine - a nostalgic era of peace and harmony in the Holy Land (1840 - 1917) pic.twitter.com/GGsHecieme

​​Mehmed VI came under pressure to sign the Treaty of Sèvres, which was even harsher to the Turks than the Treaty of Versailles was on Germany - not only would the Ottoman Empire lose all its territory in the Middle East but it would also lose chunks of the Anatolian heartland.

The treaty proposed creating a large Armenian state in the east, centred around Erzurum, granting Greece a large slab of territory around Smyrna (modern day Izmir) and also transferring land in south-eastern Anatolia to the French mandate of Syria.

Italy would also be gifted Rhodes and the other Dodecanese islands and would be given a "zone of influence" in south-western Turkey.

© AP Photo
Kemal Ataturk, left, pictured in 1937, a year before his death

The treaty outraged Ataturk and most other Turks. The Ottoman Empire had lost more than 700,000 men during the First World War and Ataturk felt it was an insult to their memory for Anatolia to be carved up like a roast chicken.

🕊💕🌍⚘👧This national day, April 23 Children's Day, in Turkey is a unique event. The founder of the Turkish Republic, Mustafa Kemal Atatürk, presented April 23 to all the WORLD's children to emphasize that they are successor of the future. pic.twitter.com/9J8lXEAZn6

​When Sultan Mehmed VI went ahead and signed the treaty in August 1920 it sealed his fate.

He tried to hang on to power in Constantinople - which would later be renamed Istanbul -  and sought the protection of the British and French who, having won the Great War, were throwing their weight around in the eastern Mediterranean.

King Constantine of Greece and his right-wing prime minister Dimtrious Gounaris thought Turkey was vulnerable and weak and, encouraged by British Prime Minister David Lloyd-George, they sent troops deep into central Anatolia in the hope of carving out a Greater Greece.

Ataturk showed his military prowess during the Greco-Turkish War and decisively defeated the Greek troops in the summer of 1922.

​The Greek army fled Anatolia and tens of thousands of ethnic Greeks - many of whom had lived in Turkey for centuries - went with them.

In November 1922 the Grand National Assembly abolished the sultanate and Sultan Mehmed VI fled into exile on a British warship, his reputation in tatters.

On this day (1 November, 1922) the Ottoman Sultanate was officially abolished. Sultan Mehmed VI was then forced into exile on 17 November. pic.twitter.com/vOuFu3Vco0

​A triumphant and emboldened Ataturk declared the Republic (Cumhurriyet) of Turkey in 1923 and also forced the British, French and Italians to tear up the Treaty of Sèvres and negotiate a new deal.

The Treaty of Lausanne - signed in July 1923 - rejected all other nations’ claims to Anatolia, including the idea of Armenian state in the east. The boundaries were identical with those of modern-day Turkey, with the exception of Hatay province, which joined Turkey in 1939 after a referendum.

​With Turkey’s borders secure, Ataturk set about transforming the country between 1923 and his death in 1938.
The main tenets of his Cumhuriyet Halk Partisi (CHP) or Republican People’s Party were modernisation and secularism.

In October 1923 the capital was moved from Constantinople to Ankara, which was more central and strategically less vulnerable.
In 1928, after 1,000 years of using the Arabic alphabet, Turks switched over to using a latin alphabet with a few extra letters like ğ and ş.

The flag drafted by the Allied forces under the supervision of the British for the remaining Anatolian rump-state that would serve as an #Ottoman hypo-colony agreed upon at the Treaty of Sèvres in 1920, ruled by Mehmed VI as a constitutional Sultan-Caliph. pic.twitter.com/KOVu5J79Od

​Ataturk also outlawed the wearing of the fez in 1925 and encouraged Turks to wear western-style clothes.

In 1934 he even introduced a law forcing all Turks to adopt surnames, something which had not been common up until the 1920s.

Many Turkish men chose masculine-sounding surnames like Yilmaz (Uncowed), Demir (Iron) and Çelik (Steel).
Ataturk’s closest ally, Ismet Inönü - who succeeded him as President in 1938 - took his new surname from the battlefield on which he had fought the Greeks in 1921.

Inönü kept Turkey out of the Second World War and, apart from the invasion of Cyprus in 1974, the country stayed largely out of the headlines until Recep Tayyip Erdoğan came to power after the 2002 general election.

Although Erdoğan defeated the Kemalist CHP - which is now the main opposition party - he remains an admirer of Ataturk, a national hero whose face can be seen everywhere in Turkey.

But modern Turkey would not be what it was without the events of 23 April 1920 and that is why Ataturk turned it into a national holiday - National Sovereignty and Children’s Day.

As for the Osmanoğlu family which had ruled over the Turks since 1299 - Sultan Mehmed VI died in exile in Italy in 1926 and although most of the family was allowed to return to Turkey in 1974, the man who would be Sultan, Dündar Ali Osman, now aged 89, still lives in Damascus.