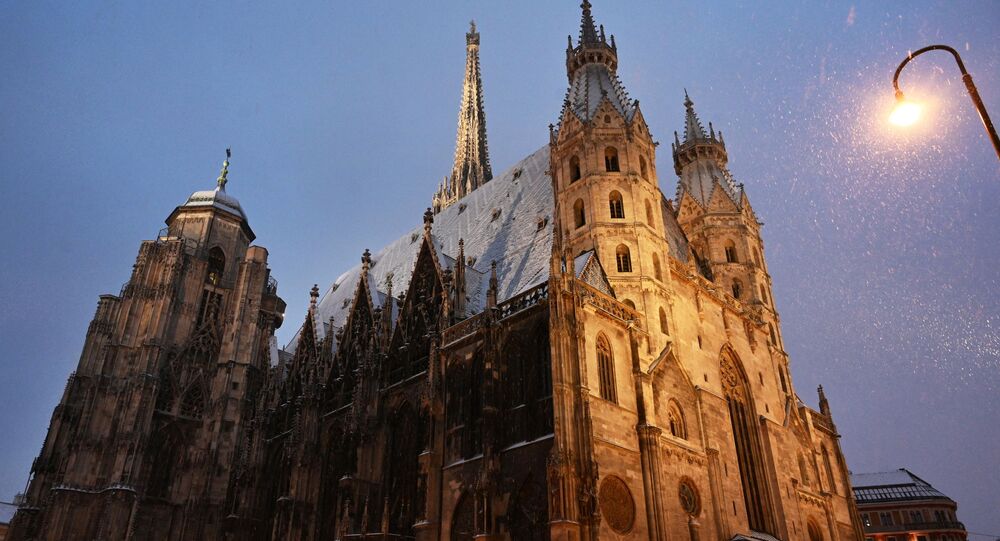 This week marked the 75th anniversary of the Soviet operation to liberate Vienna during World War II, with the assault marking one of the final operations of the war in Europe and enabling Austria to secede from the crumbling Third Reich.

Mikhail Ulyanov, Russian Permanent Representative to International Organizations in Vienna, Austria has corrected US Embassy Moscow spokesperson Rebecca Ross over a series of tweets which seemingly inferred that St. Stephen’s Cathedral, one of the oldest and most significant architectural landmarks in the Austrian capital, burned down in 1945 as a result of the actions of Soviet troops.

On Saturday, Ross wrote a three part tweet about the tragic fire that severely damaged the cathedral on April 12, 1945.

“75 years ago Soviet troops liberated Vienna from Nazi control. Throughout the war, Vienna’s famous St. Stephen’s Cathedral survived, only to be severely damaged by fire on April 12, 1945. Reconstruction was funded by donations from Austrians,” the diplomat wrote, proceeding to recall the cathedral’s history and her family’s own personal connection to it.

First dedicated in 1147, “Stephansdom” has brought so much hope to so many for centuries - Mozart was married here, as was Haydn. And it is said that Beethoven realised his deafness when he could not hear the famous bells ring. 2/3 (Crespiatico/Shutterstock) pic.twitter.com/wXtvlZTRpA

Commenting on the tweet, Ulyanov pointed out that the context of the message “creates the impression that the Cathedral was damaged by Soviet troops, while in fact they did their best to save the historical center of Vienna at the cost of their lives.”

The fire was in fact caused by local looters, the Russian diplomat stressed, suggesting that perhaps Ross should “clarify and correct” her statement.

The context creates impression that Cathedral was damaged by Soviet troops while in fact they did their best to save historical centre of Vienna at the cost of their lives. Fire was caused by local looters. An occasion for the US colleague to clarify and correct herself? https://t.co/XI8pdc5LEz

Ross was gracious enough to do so, tweeting that “the fire was accidental, and heartbreaking as so many had fought so hard to save the Cathedral throughout the war.” Ulyanov thanked Ross for the clarification.

Between 1944 and 1945, the Allies carried out over 50 bombing runs against Vienna, flatting about 20 percent of the city and leaving multiple architectural landmarks in ruins and leaving over 270,000 of the city’s residents homeless.

On April 12, 1945, having survived these bombings, Stephen’s Cathedral was severely damaged by fire after looters set nearby shops ablaze. The fire collapsed the ancient church’s roof, caused the largest of its bells to crash down inside the North Tower, and destroyed much of its priceless interior, including 15th century choir stalls and organ. Fortunately, some of the artifacts sheltered inside the cathedral, including Frederick III’s tomb, were saved thanks to the erection of brick sarcophagi prior to the fire.

Troops from the Red Army’s 2nd and 3rd Ukrainian Fronts and allied Bulgarian forces began the liberation of Vienna on April 5, with the battle lasting until April 13. The operation included fierce house to house fighting, with local Wehrmacht units, SS, Volkssturm, police units and Hitler Youth members engaging in a fanatical defence of the city. The broader Vienna offensive operation, which began on March 16 and wrapped up on April 15, cost the Red Army over 39,000 dead, with nearly 2,700 Bulgarian troops losing their lives. The enemy’s losses were estimated at 30,000 killed and 125,000 captured.

© Sputnik / Ольга Ландер
Battle for Vienna. St. Stephen's Cathedral visible in the background as Soviet troops prepare to fire a mortar round at an Axis position.

Austria’s post-war government made the restoration of St. Stephan’s one of its symbolic priorities, with the cathedral partially reopened in late 1948, and restoration completed by 1952, with reconstruction funded by donations from the public.