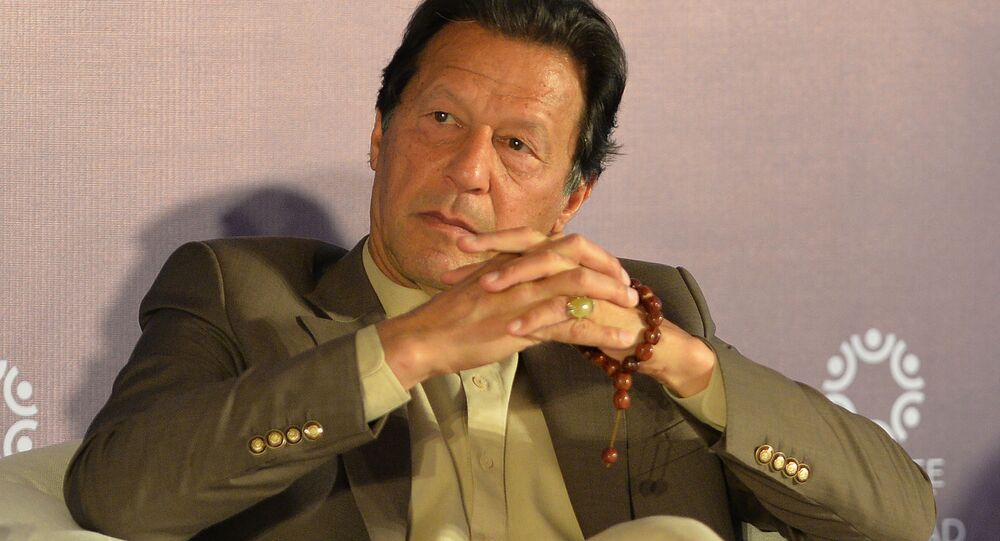 New Delhi (Sputnik): Pakistan is coming to grips with the COVID-19 outbreak; more than 7,492 have coronavirus and at least 143 have died so far. Due to economic concerns, Pakistan's Prime Minister Imran Khan has been saying he does not favour a nationwide lockdown but urged people to avoid gathering at mosques, provoking religious leaders.

A standoff between radical religious leaders and the government of Pakistan has led to huge congregations of adherents filling mosques to offer Friday prayers throughout the country, in stark defiance of the government’s requests amid the coronavirus outbreak.

Yesterday, Lal Mosque in the capital Islamabad was pictured packed with Namazis offering Friday prayers despite a lockdown in Sindh province and with no precautionary measures. But what gained the most attention was a man holding an assault rifle to guard the congregation.

Lal Mosque Islamabad. Full of namaazis in today's Friday prayers. And it is not only mosques, public is maintaining no lockdown or social distancing anywhere in daily walk of life in Pakistan. pic.twitter.com/w58lLHZttE

The clerics and leaders of the religious party had demanded in a joint statement that mosques should remain open daily for daily prayers.

“Restriction of three or five people at mosques are not proving to be practical; those who are sick and the elderly should not come to mosques,” said Mufti Taqi Usmani, one of the top clerics in Pakistan.

Abdul Aziz, a religious leader at Islamabad's Lal Mosque was quoted by Al Jazeera as saying: "[Lockdowns are] not the answer to these problems." Adding, "We believe the people should not be made to fear things right now, they should have faith in God at this time, and place their hope in him ... If death is written for you, then it will come."

The conservative Islamic clerics in Pakistan continue to rein among the religious hardliners and are powerful enough to gather the people in the streets.

Despite the country haiving less than 3,000 intensive care beds, it has gained approval for a $1.3 billion emergency loan from the International Monetary Fund (IMF) to ease the economic impact of the novel coronavirus pandemic and ramp up testing.

Imran Khan's government has advised the mosques in the country to restrict their Friday prayers to break the chain of the deadly infection and allowed a maximum of five people (mostly comprising of staff members residing inside the mosque's premises).

However, the fear of pandemic spreading faster looms larger during the approaching holy month of Ramadan, which will last from mid-April to mid-May.