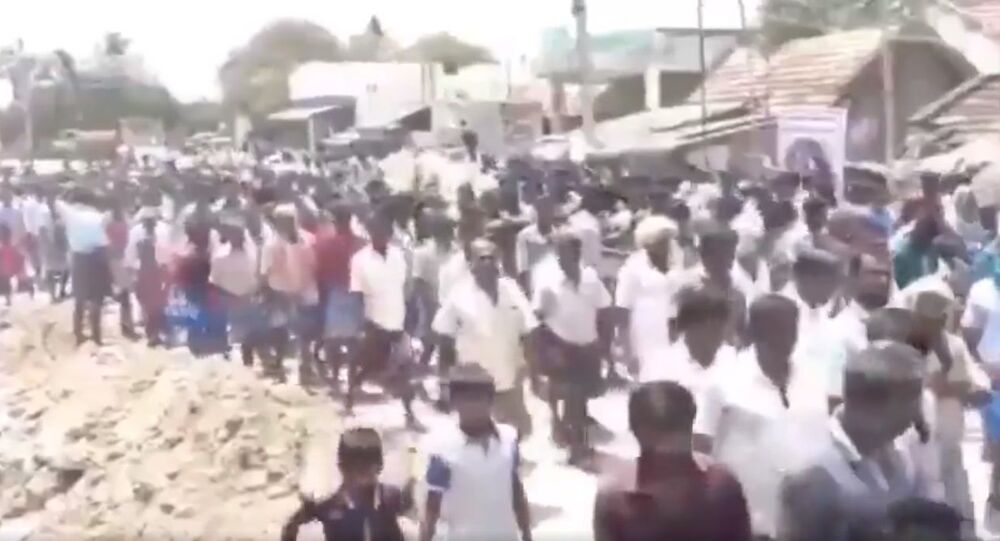 New Delhi (Sputnik): Jallikattu bulls are revered in rural southern India. They are viewed as the pride of their villages and owners, as they bring laurels back home after participating in the bloody bull-taming festival "Jallikattu". One such prized possession was a 10-year-old bull, which died following an unknown illness.

Thousands of people congregated in the southern Indian city of Madurai to pay respect to a temple bull, violating the national COVID-19 lockdown. The locals participated in the funeral, defying the prohibitory orders of the Tamil Nadu state government.

The bull was placed in a funeral casket and decorated with garlands and fabrics for the procession in Alanganallur village in Madurai.

However, about 3,000 people who participated in the funeral were booked for violating the prohibitory orders, Section 144, Madurai District Collector T.G. Vinay told ANI news agency.

This large crowd gathered yesterday at Muduvarapatti village in Tamil Nadu for the funeral of a Jallikattu bull. Tamil Nadu has 1,242 #Covid19 cases. pic.twitter.com/AEH9PZiwep

The temple bulls in India’s Tamil Nadu state are revered and treated as a divine creature, as they participate in Jallikattu festival. The bull-taming sport is played each year as part of a tradition to celebrate the harvest festival of Pongal.

The deceased bull belonged to the Chellayee Amman temple. “It was a bull that was the pride of our village because it never failed to win prizes at Alanganallur, Palamedu and Avaniapuram jallikattu games in Madurai and other parts of the state", the Times of India quoted a local as saying.

While the owner of the bull was inconsolable, the villagers bid farewell to the bull with teary eyes.

Although the bull received a befitting farewell, its grand funeral irked the authorities, who have now registered a complaint against the attendees for defying social distancing norms and the lockdown.

The lockdown has been extended in India until 3 May due to the surging number of coronavirus cases, while the country now has a total of 12,380 COVID-19 cases with 414 deaths, with 1,489 people having been cured and discharged.