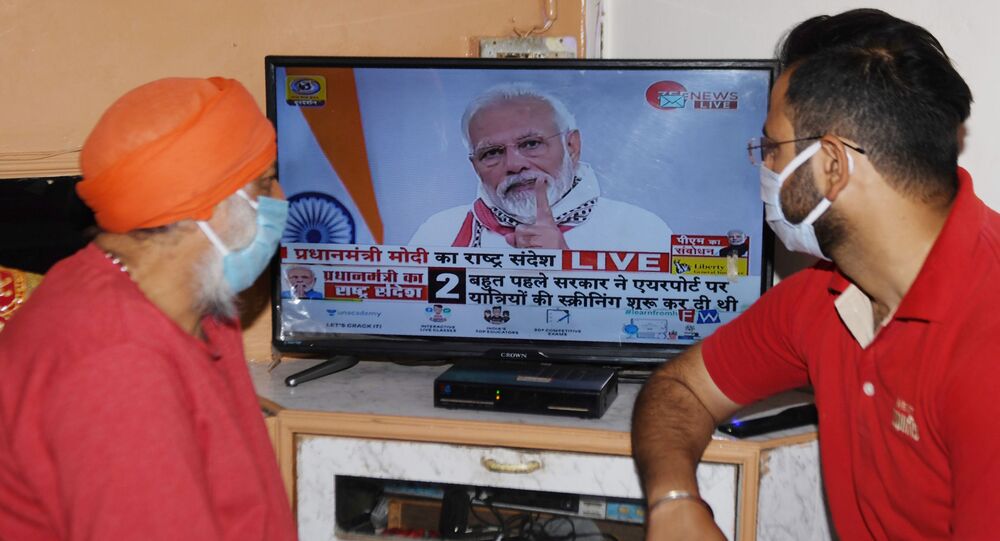 New Delhi (Sputnik): India, a country of over 1.3 billion people, is experiencing the longest lockdown in its history due to the COVID-19 pandemic. Prime Minister Narendra Modi on Tuesday announced a second phase of the lockdown, extending it until 3 May.

The world’s second most followed leader on social media, Indian Prime Minister Narendra Modi, is leading the nation by setting an example of using masks as personal protection from coronavirus infection.

On Tuesday, after his fourth televised address to the nation since the outbreak of COVID-19, Modi changed his profile picture on social media, with a desi "gamcha", or traditional scarf.

PM Modi changes his DP on Twitter, uses a Gamcha to cover his face.

PM Modi ji leads from the front, leads by Example, every single time!
Modiji changes his DP to symbolise the importance of social distancing and using mask as shield..Blessed with such a PM, We Indians will never loose this battle! 🇮🇳@ratnakar273#Lockdown2#ModiMangalMessage pic.twitter.com/irlsDI4q2Z

Wear a homemade 😷 to combat #COVID2019 !#StaySafe during #Lockdown2 Spend time productively #StayHome and #dontpanicbuy #Help others
Be #compassionate
Inspire others to wear a #mask change your #DP
This is my #NewProfilePic ! pic.twitter.com/zayXLRNMMw

​I am following Our Prime minister @narendramodi sir

In his fourth address to the nation in less than a month, Modi began his speech by greeting citizens with Namaskar, or folded hands, with a white coloured "gamcha", or scarf, covering his face. He later lowered the scarf to begin his speech.

Gamcha is a long piece of cotton cloth for towel-like usage, commonly used by men in rural areas. It is wrapped around the neck or head, mostly by farmers and labourers to escape the extreme heat.

Modi has been promoting the usage of handmade masks instead of professional medical masks to promote face covering to fight the virus.

According to the federal Health and Family Welfare Ministry, there are over 10,000 cases in the country as of Tuesday, while 1,035 people have recovered and 339 people lost their lives to the virus.