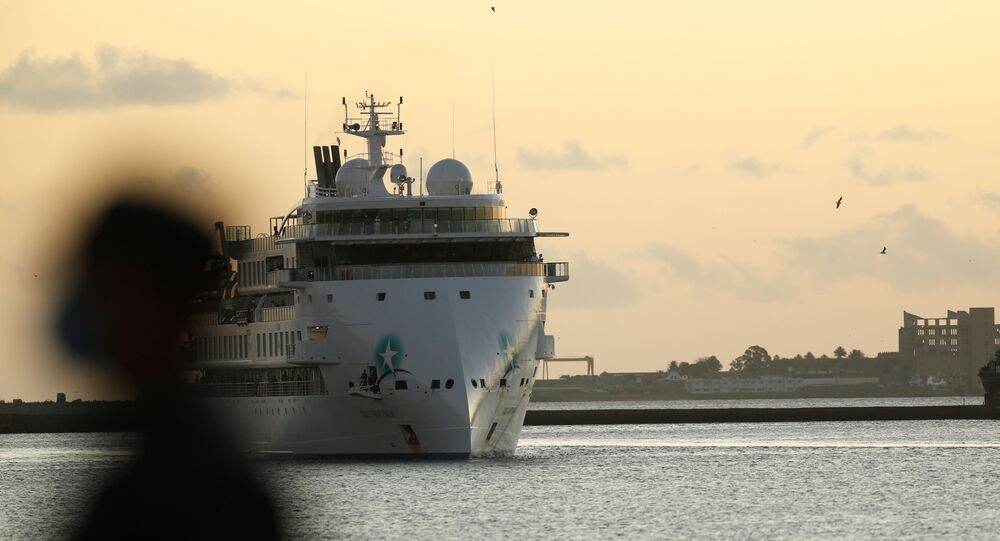 An Australian cruise ship is racing to schedule emergency flights for its passengers and crew after over half of the individuals on the vessel tested positive for the COVID-19 novel coronavirus.

Aurora Expeditions’ Greg Mortimer cruise ship was ordered to dock off the coast of Uruguay late last month after COVID-19 testing came back positive for 128 people aboard the ship. The remaining 89 tested negative for the novel coronavirus.

After nearly two weeks on the dockside, six individuals from the ship have been transported ashore for treatment at a Montevideo hospital. Aurora Expeditions claims “all six people ashore are stable,” according to Fox News

“As always, we would like to acknowledge the Uruguayan public health and infectious diseases team for their ongoing time and support,” the cruise line said in a statement provided to the outlet.

The Greg Mortimer departed on March 15, when there were around 153,500 COVID-19 cases reported worldwide, according to World Health Organization data. The current global count for novel coronavirus cases is nearing 1.7 million.

The New York Post reported Wednesday that the 96 Australians and 16 New Zealanders aboard the ship have been offered an emergency flight back home via an Airbus 340 that has fitted to separate those who have been infected with the contagious disease from the other passengers.

However, due to cleaning fees and the lack of flights amid the pandemic, costs for such a trip have surged, and tickets for the flight are estimated to run at least $9,300 per passenger. “We know that it is not viable for many people and we are working on a solution,” Aurora Expeditions said, as reported by the Post. The company noted the price of the tickets “reflects the global aviation situation.”

Aurora Expeditions is reportedly attempting to get the Australian government to pay the costs.

The cruise line’s website noted in a Friday update on the matter that EU, UK and North American passengers from the Greg Mortimer will be receiving “medical charter flight options” that will be provided at no cost for passengers.

“The focus is to get everyone home as quickly and safely as we can, and we are following up all options including working with all the relevant embassies,” the company said, noting that re-testing will continue as transportation arrangements are being made.

While Aurora Expeditions claims that all those onboard were asymptomatic, passenger Dr. John Clifford appeared to describe a different series of events when he spoke with the Australian Broadcasting Corporation.

"For several days on board we thought we were in a nice, safe bubble away from the problems of the world and were disillusioned when, six days later, fellow passengers' temperatures started to rise," he said.

Furthermore, the official Twitter account of the Uruguayan National Navy noted that two of the individuals transported from the ship for further medical treatment were diagnosed with both novel coronavirus and pneumonia - a serious complication triggered by COVID-19.

‘Higher Casualty Rates’ to Emerge From US Prisons as Inmates, Guards Spread COVID-19