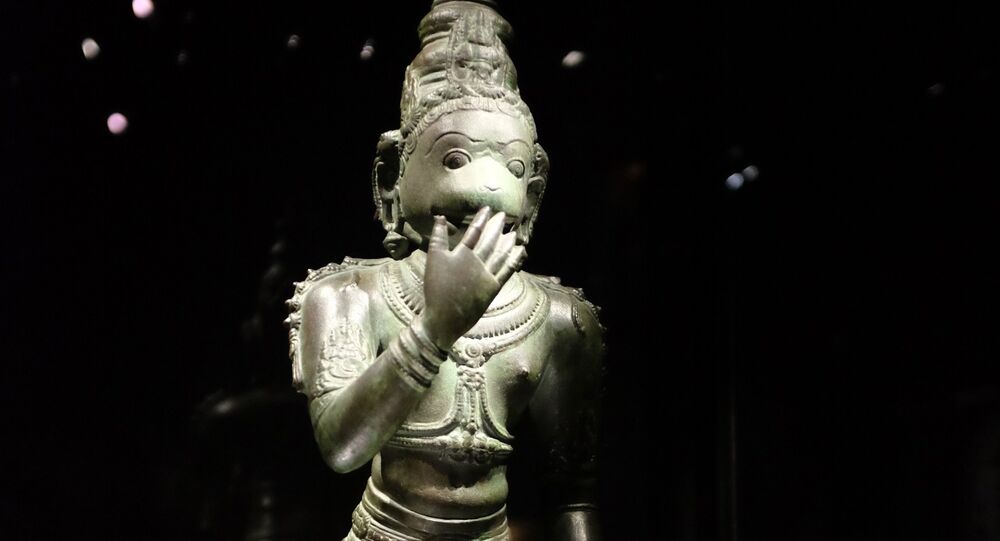 New Delhi (Sputnik): While celebrating the birthday of Lord Hanuman on Wednesday, Hindus are worshipping the god considered as a “saviour from crisis (Sankat Mochan)”. They are praying to the Hanuman (Monkey God) to help the world get through tough times and protect lives from the pandemic.

The Brazilian president cited the mythological character Hanuman (Monkey god), whose birthday Hindus are celebrating on Wednesday, while expressing gratitude to India for the gesture.

“Just as Lord Hanuman brought the holy medicine from the Himalayas to save the life of Lord Rama's brother Lakshmana, and Jesus healed those who were sick and restored the sight to Bartimaeus, India and Brazil will overcome this global crisis by joining forces and sharing blessings for the sake of all people", an extract from the letter from Brazilian President Bolsanaro to Prime Minister Modi reads.

Hanuman – son of the air – is a character from Hindu mythology, Ramayan. Hindus celebrate his birthday as per the Hindu calendar during the full moon in April. With #HanumanJayanti trending on Twitter, people are praying to him to save lives from the COVID-19 pandemic as well.

Lord Hanuman is the son of Vayu, who is not simply the Wind God but rules over the Cosmic Prana. That is why Hanuman can assume any size and has all powers. Worshipping Hanuman can bring us the highest Prana and healing energy of the universe. #HanumanJayanti

On the auspicious Occasion of #HanumanJayanti ,May Lord #Hanuman gives all strength and wisdom to fight against fear and worries . #IndiaFightsCorona One of my SandArt of the Lord Hanuman. pic.twitter.com/lcSfy0ZrQ9

May the grace of Bajrangbali carry us through the tough times and protect us from pandemic. #HanumanJayanti 💐
🙏🙏🙏🪔🪔🪔 pic.twitter.com/MZg9kq0sUF

Brazil was one of 30 countries that sought supplies of hydroxychloroquine to save lives infected with the coronavirus. After receiving requests from countries including the US, India — the largest producer of the drug — lifted the ban and agreed to supply hydroxichloroquine to countries affected by the pandemic.

Latin America's largest country has registered a massive rise in COVID-19 deaths in the last 24 hours. In the latest figures, the country has 13,717 infected persons, while death toll rose to 686.

US President Donald Trump also reversed his tone for India on Tuesday, a day after he threatened of sanctions if New Delhi did not supply the anti-malarial drug to America, which is now one of the countries hardest hit by the COVID-19 pandemic.

Amid controversy over the drug's side effects, Trump has claimed the combination of hydroxychloroquine and the antibiotic azithromycin is "pretty amazing" and saving lives.

Now Taste the Virus: India’s Obsession With Sweets Turns Coronavirus Into One