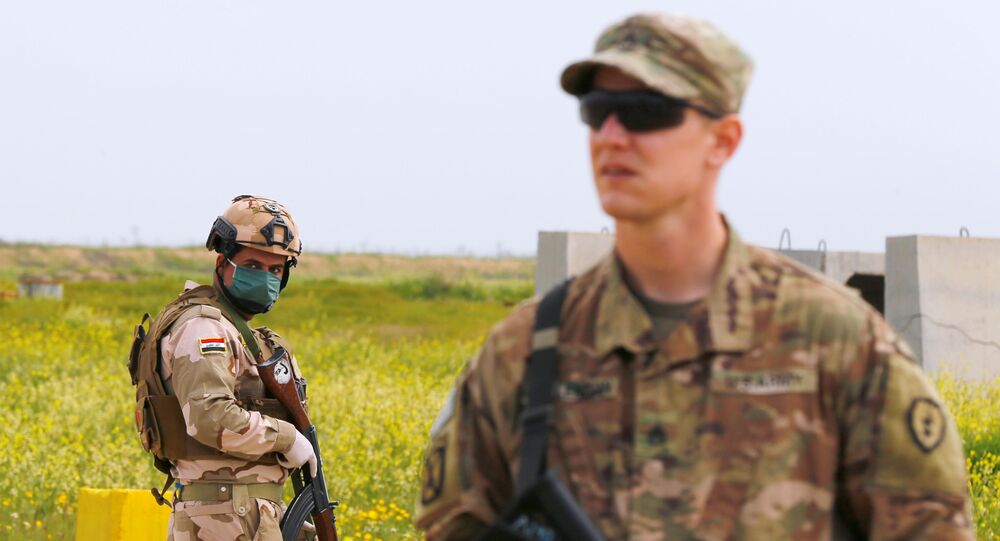 The US has recently been withdrawing its military forces from the Middle Eastern country following a major scandal after the US Air Force killed Iranian General Qassem Soleimani at Baghdad Airport shortly after he arrived on a secret diplomatic mission.

US Secretary of State Mike Pompeo has announced that the White House will start a "strategic" dialogue with the Iraqi authorities in the middle of June, adding that a variety of issues, including possible future American military deployments, will be on the agenda.

Pompeo's statement comes as the American military continues to withdraw from the Middle Eastern nation. The US coalition transferred control over the Abu Ghraib base to the Iraqi authorities on 7 April after American soldiers vacated four other bases in Iraq in March.

© REUTERS / THAIER AL-SUDANI
A U.S. soldier is seen during the hand over of US-led coalition forces to Iraqi Security Forces at Qayyarah Airfield West in the south of Mosul, Iraq March 26, 2020.

The apparent military withdrawal comes months after the Iraqi parliament passed a non-binding resolution calling for an end to all foreign military deployments in the country as well as amid continuing missile attacks on US positions in Iraq. The resolution was passed in the wake of an unsanctioned US Air Force operation on the country's soil that resulted in the assassination of high-ranking Iranian General Qassem Soleimani on 3 January.

The latter was killed while he was leaving Baghdad Airport after having arrived on a secret diplomatic mission. Washington claimed that Soleimani was planning attacks on American diplomatic missions in Iraq, but failed to give any specifics or name the source of their information.

In the months following Soleimani's assassination, the US repeatedly dismissed the idea that it might abide by the demands of the Iraqi parliament and leave the country.