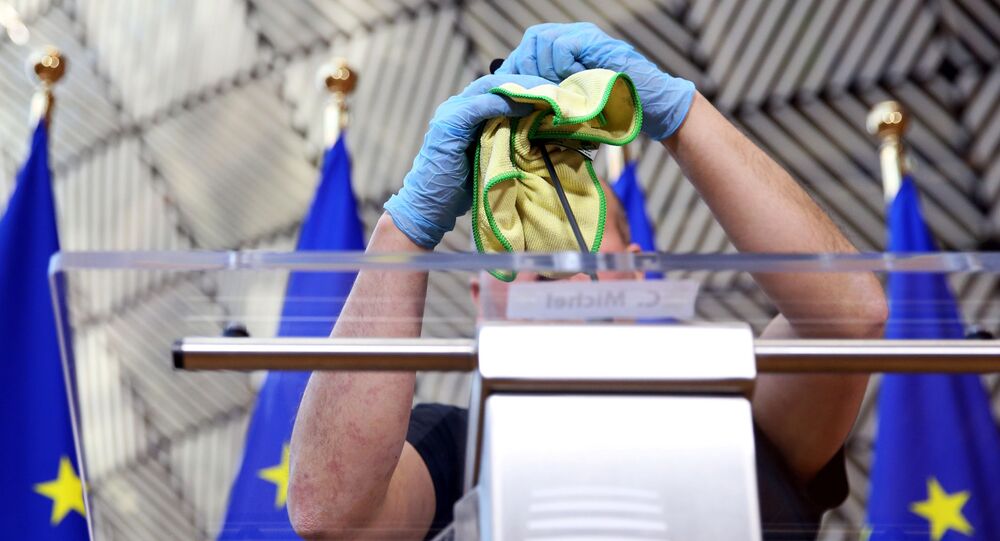 Russia's EU Envoy on Claims of COVID-19 Disinformation: Strange to Play Blame Game at Time Like This

BRUSSELS (Sputnik) - Russia's permanent representative to the European Union, Vladimir Chizhov, has denounced in an interview recent claims by a European Parliament political group about Russia's disinformation campaign on the coronavirus, saying that it is strange to engage in accusations amid the ongoing crisis.

"This document would not deserve any reaction, were it not for the moment when it emerged. The current coronavirus pandemic certainly calls for uniting the effort of all the countries and all the people. Engaging in such plots and such obviously groundless accusations at this moment is more than strange," Chizhov said.

When asked whether he was feeling any additional pressure from the EU in light of these disinformation claims, Chizhov expressed the belief that one's interest in such accusations was most likely explained by "intellectual poverty."

"Perhaps, there is some instinctive desire to shift the [blame for the] problems caused by the pandemic on others," he explained, saying that Western Europe has plenty of its own problems to solve.

"We see how many infected people some EU member states are reporting, we see the intensity of member states' mutual complaints, we see the problems European structures are facing as they try to find a common solution and a common way-out. All this can be assessed in different ways, but... distracting the public and making it look for a black cat in a dark room, especially when there is no cat at all, is at least not decent," the diplomat concluded.

Chizhov proceeded by saying that it was possible that Europe could strengthen its common anti-crisis measures for removing the consequences of the COVID-19 pandemic, although it was too early to discuss.

Earlier this week, three German deputies from the European Parliament's Greens/European Free Alliance political group called on the EU leadership in a letter to tackle Russia's and China's alleged propaganda campaigns, aimed at undermining trust in the EU institutions and values. However, the authors of the letter did not cite any specific example.

Coronavirus Pandemic Does Not Mean Upcoming Collapse of EU

Vladimir Chizhov further said that he does not see the crisis caused by the coronavirus pandemic as "the beginning of an end" for the bloc, pointing to the EU's ability to cope with challenges.

"One should not fall for theories saying that this is the beginning of an end for the EU. Personally, I do not think so. I believe the EU has the potential to counter external challenges. We have seen this before," Chizhov said.

The EU has overcome the 2008-2009 financial crisis, the migration crisis and all the difficulties around Brexit, Chizhov recalled. Each time there were people thinking this would mean a collapse for the bloc — and each time the EU survived, he added.

Vladimir Chizhov, has expressed the belief that the EU leadership's reaction to the COVID-19 pandemic came slightly belatedly.

"I believe an objective observer can note that the EU leadership reacted a bit belatedly. But let this be explained by the fact that it is very 'young' yet, as the rotation of the key posts was conducted mere months ago," Chizhov said.

He recalled that the EU was providing significant allocations to support certain sectors of the economy hit by the outbreak.

"It is too early to discuss the parameters of the EU's exit from the current crisis. However, statistics compiled over the past few days show that those European countries that were the first to plunge deeper will also be the first to start overcoming it. I mean Italy, first of all," Chizhov said.

Europe has recorded over 421,000 confirmed COVID-19 cases, according to an update by the European Center for Disease Prevention and Control published on 1 April. Italy has the highest number of cases in the region, followed by Spain and Germany. Across the whole of Europe, there have been over 29,000 confirmed deaths.