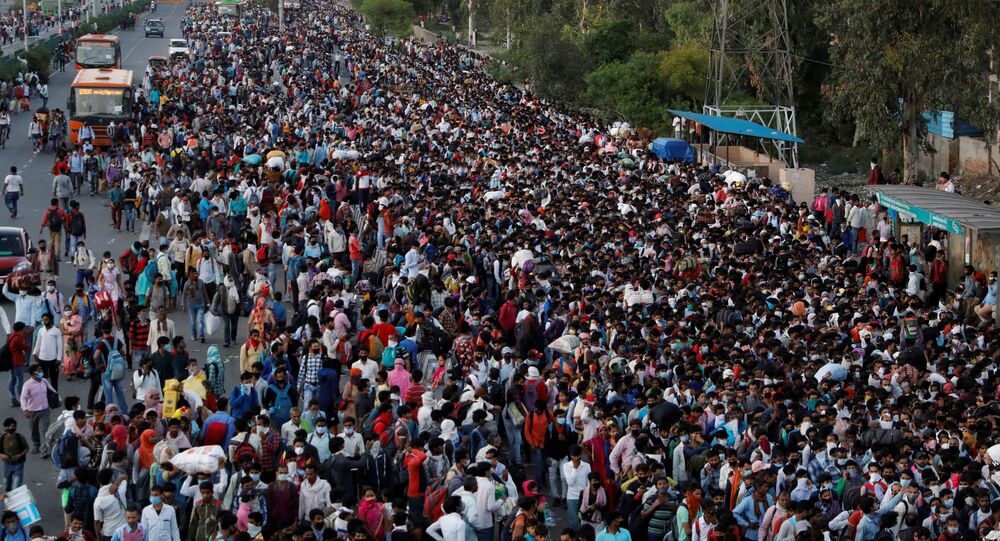 New Delhi (Sputnik): Indian Prime Minister Narendra Modi has apologised to the people of the country for imposing a 21-day lockdown which has led to the mass exodus of thousands of migrant labourers. Workers across the country have marched to their hometowns as the world’s biggest lockdown has left them jobless due to the closure of factories.

A top chest surgeon in New Delhi, Dr Arvind Kumar, has warned that the mass migration of labourers, defying social distancing and the lockdown, could become a storm and eventually lead to an exponential increase in the number of coronavirus cases in India.

“The state government should act fast to stop this. It is a potential time bomb but something which was not expected. It has the potential to become a storm”, said Dr Kumar, chairman of the Centre for Chest Surgery and director of the Institute of Robotic Surgery at Sir Ganga Ram Hospital in New Delhi.

Dr Kumar added that the migration of people was something the government couldn’t have expected and that such situations are expected to arise when dealing with a population of over 1.3 billion.

The doctor, who recently made headlines by saying that India has already moved to stage three of community transmission, said that the migration of people can negate all the gains of the lockdown imposed by the Indian prime minister.

On Sunday, the Indian Home Ministry issued strict guidelines to police and authorities to stop the people from breaching the lockdown. The advisory ordered that those who have violated the measure and travelled will be subject to a minimum 14 days of quarantine in government facilities.

“Directions were issued that district and state borders should be effectively sealed. States were directed to ensure there is no movement of people across cities or on highways. Only movement of goods should be allowed”, a statement issued by the ministry on Sunday reads.

Highways across India were swamped with thousands of labourers walking long stretches with their belongings and families soon after the 21-day lockdown was imposed.

Despite state governments urging the migrants to stay put where they are, the people, who are adamant to return to their hometowns in Uttar Pradesh, Bihar, Rajasthan, and Punjab, have continued to cross borders after losing their jobs due to the shutdown. The labourers ask that if they do not have money to sustain themselves in big cities amid the lockdown and no work to earn anything, how will they survive by staying there?

As per India's federal Health and Family Welfare Ministry, there are 1,091 confirmed cases of the infection as of 30 March, including 49 foreign nationals, while 29 people have lost their lives.